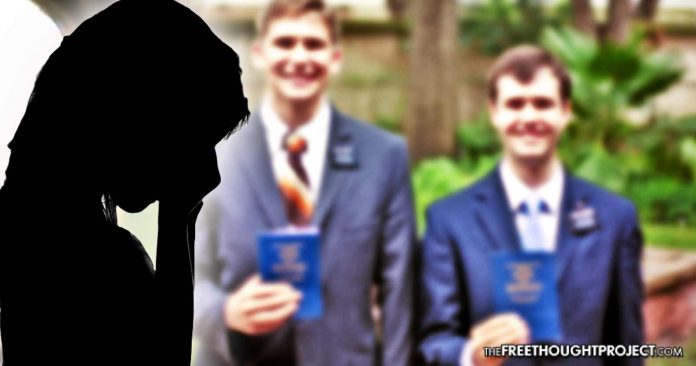 Victims who claim they were told not to speak out about the sexual abuse they endured as children are now sharing their stories, as the religious organization that abused them is paying over $2 million to protect its leaders.

A court in San Diego ordered Jehovah’s Witnesses to pay $4,000 each day for withholding documents that show their leaders were aware that a man with a history of child sex abuse was being promoted within their organization—despite continued allegations against him. The decision was upheld by an appellate court in California this month.

The original lawsuit was filed by Osbaldo Padron, a former Jehovah’s Witness who claimed that he was sexually abused as a child by an adult member in the organization, Gonzalo Campos. According to a report from Reveal from The Center for Investigative Reporting, “Campos confessed to sexually abusing seven children,” but a police report was never filed.

“During that time, leaders at the Jehovah’s Witnesses world headquarters in New York–known as the Watchtower–knew that Campos had abused children, according to court documents. Yet they continued to promote him to higher positions of responsibility in his congregation and took no action to prevent further abuse, the documents show.”

A similar pattern of the organization protecting sexual abusers has also been ongoing in the United Kingdom, according to a report from the BBC. Two women reported that they were raped by family members or by friends of family members, and they were advised not to report their abusers to law enforcement.

BBC Reporter Felicity Kvesic said that after interviewing multiple victims, they claimed they reported the abuse they experienced to the organization, and it refused to acknowledge their claims because they did not fall under the criteria for the “two witness rule.”

“It is a procedure set by the main governing body of the religion and means for any sin committed, there must be two witnesses to it in order for the elders of the congregation to take any action,” Kvesic said. “The victims I’ve spoken to said the organization self-polices and teaches members to avoid interaction with outside authorities or to take another member of the religion to court.”

The report from Reveal claimed that the organization instructed its leaders “to keep child abuse secret from law enforcement as a matter of policy,” and in 1997, it sent out a letter to its leaders in the United States, “instructing them to send to a written report about anyone currently or formerly serving in a position of responsibility known to have sexually abused a child.”

In the case of Osbaldo Padron, if the leaders in his congregation followed orders, then they would have submitted documents to the Watchtower detailing the confessions from Gonzalo Campos about his pattern of sexually abusing children. If the highest leaders in the organization were aware of Campos’ crimes, and they continued to enable him by promoting him to positions of greater responsibility, then they are all responsible for protecting the pedophile.

The Watchtower has refused to turn over the documents showing that Gonzalo Campos’ sex crimes were reported within the organization, claiming that it would violate the confidentiality agreements of the leaders who reported him. However, a judge in San Diego responded by imposing a sanction of $4,000 a day in June, until the organization produces the documents. That tab is now over $2 million.