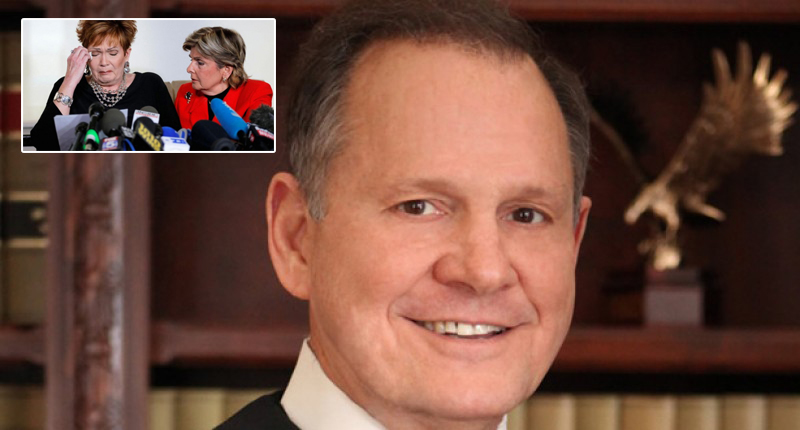 Alabamians are going to want to read this in full.

The following statement was posted by the Moore Campaign on Facebook:

GADSDEN, Ala. – On Monday evening, the Moore Campaign unveiled statements from key witnesses that completely bust the story of Beverly Nelson and Gloria Allred and further reveal an unconscionable bias on the part of state and national press to hide the truth from Alabama voters who will undoubtedly see through the “fake news” and elect Judge Moore for the man that they have always known him to be.

According to a former waitress, Olde Hickory House required employees to be 16 years old. Nelson claims she was 15 when she started.

According to two former employees, the dumpsters were on the side of the building. Nelson claimed that they were in the back.

Olde Hickory House sat right off of the four-lane highway and had a wrap-around porch with lights all around it. Nelson claimed that the surroundings were “dark and isolated.”

Rhonda Ledbetter, who worked at Olde Hickory House for almost 3 years, states that the earliest it closed was at 11 p.m. but she believes it was open until midnight. She is certain it did not close at 10:00 because Goodyear was next door, and employees came to eat when their shift ended at 10 p.m. Nelson claims her story occurred after the restaurant closed at 10 p.m.

It is unlikely that there was an entrance from the back of the parking lot, which Nelson claimed existed. Multiple sources have claimed that everyone parked on the sides of the building because there wasn’t much room behind the restaurant, according to Rhonda not enough room to turn around.

Renee Schivera stated that a neighborhood backed up to the parking lot and it was adjacent to the backyards of people’s houses, so she did not see how there would have been a back entrance as it would have gone through someone’s yard.

Nelson claimed that Judge Roy Moore came in almost every night and sat at the counter, but former employees state that customers at the counter were served by the bartender or short order cook – not served by the waitresses and had no reason to interact with the wait staff. Additionally, two former waitresses and two former patrons state they never saw Judge Moore come into the restaurant.

These witnesses have shared their testimony with multiple news outlets. The outlets have failed to report.

Rhonda Ledbetter, a retired public school teacher who is currently the senior choir director at a Baptist church and teaches children at a local, church-sponsored day care center, was a waitress at Olde Hickory House for almost three years from 1977-1979. She was a college student at Jacksonville State University at the time and worked varying shifts at different times of day, multiple days a week during the time of her employment. She said in a statement: “When I heard Beverly Nelson’s story, there were several details that were different from what I remember. I was nervous at coming forward because of all the attention this story has gotten, but as a moral and ethical person I had to speak up about what I know to be true. I was a waitress at Olde Hickory for almost three years from 1977-1979, and I never saw Roy Moore come in to the restaurant. Not one time. And I would have noticed because most of our customers weren’t wearing suits, especially not at night. Many customers worked at Goodyear next door and would stop in on their way to and from work, and I don’t remember anyone from the courthouse coming in at all. That just wasn’t our crowd.

“Second, Nelson said the restaurant closed at 10 p.m. but I know the earliest it closed was 11, though I believe it was midnight. I’m certain of that because Goodyear employees came in to eat after their shift ended at 10:00 p.m., so there’s no way we would have closed at that time.

“Third, the area wasn’t dark and isolated as she described. Rather, the building was right off the busy four-lane highway and people and cars were always around. The restaurant had a wrap-around porch, like the ones at Cracker Barrel restaurants, and there were lights all around the sides of the building. So it wasn’t dark and anyone in the parking lot was visible from the road.

“I came forward because from what I’ve seen, the media is only interested in reporting one side of this story. In fact, Dixon Hayes from WRBC in Birmingham asked for former employees to contact him but never responded when I told him I never saw Roy Moore come into Olde Hickory House during the three years I worked for. Two other news outlets in the state asked to interview me and I agreed, but neither one has aired my interview and I have to wonder why they don’t think the people of Alabama deserve to hear anything that counteracts the accusations against Judge Moore. It’s not for me to say whether or not something happened, I can only tell the truth about factual details that I know for sure. I think all Alabamians deserve to have all of the facts so they can decide for themselves what the truth is. Despite what the national media and people in DC might say, Alabama voters are intelligent and have common sense. We don’t need anyone to tell us how to vote or to explain to us what really happened. We will make that decision and I just wanted to do my part in sharing the truth on some of these important facts. I, like all Alabama voters, want any and all information that can shed light on the truth.”

Johnny Belyeu, Sr. is a former police officer with over two decades of experience with the Etowah County Sheriff’s Department and the Gadsden Police Department. He said in a statement, “I was an officer with the Etowah County Sheriff’s Department in the 1970s which means I worked in the courthouse and knew who Roy Moore was since he was the Deputy District Attorney at the time. I was a regular customer at Olde Hickory House, and I never once saw Judge Moore come in there. If he had I would have immediately recognized him. I also never met Beverly Nelson during any of the many times I frequented the restaurant, and I can’t say that she even worked there.”

Renee Schivera of Huntsville, Alabama stated, “I was a waitress at the Olde Hickory House during the summer of 1977, before my senior year of high school. When I heard Beverly Nelson’s story the first thing that stuck out to me was that I don’t remember Roy Moore ever coming into the restaurant. I also don’t remember her working there. The other thing that struck me as odd is that from my best recollection, the dumpsters were to the side of the building. I just know they were visible from the road, and not back behind the building. But the main thing is that if someone came in almost every night we knew who there were, and I never saw Roy Moore there. As a Christian woman, I wouldn’t lie for anyone and I am only sharing what I know because it’s the truth.”

“The days of unbiased reporting are over,” Moore Campaign strategist, Brett Doster said. “The liberal media will dodge any source and refuse to air any interview that doesn’t square with their effort to land a liberal Democrat in the senate seat. The Moore Campaign is committed to presenting factual truth to the people of Alabama and looks forward to victory on December 12.”

The national media is refusing to look into these claims even though the story has thousands of shares on Twitter and Facebook.

It appears only local media are covering the story.

Breitbart reported Monday that Young’s ex-boyfriend said he does not believe her story:

The former boyfriend, Jeff DeVine, attended high school with Young and is currently in Thailand, where he runs DeVine Ministries with his wife and twin daughters. He says that as part of his ministry, which focuses on rescuing children, he has worked with victims of rape and other trauma.

[…]Asked about the allegations, DeVine stated, “No, I don’t believe it.” DeVine, speaking to Breitbart News from Thailand via Skype, said that his estimation was “based off just my experience with people,” and not any specific evidence that Nelson was being dishonest.

“I have learned to just study body language and the way a person tells a story. And as I said, I wouldn’t qualify, I am sure, in a court of law as being an expert – but just from my experience, I didn’t find her story believable. And the way she told it.”

“I could only guess to her motive.,” he stated. “Whether somebody has offered her something to do this. I really couldn’t say. I would only be guessing.”

[…]DeVine could not recall Nelson working as a waitress in a restaurant at all. “I don’t remember her working in that restaurant,” he stated. “I’m not saying that she didn’t. I just don’t remember it.”

As I covered earlier, Young’s stepson Darrel Nelson also claims that his stepmother’s accusations are “one hundred percent a lie.”

“I know for a fact that there is a lot that that woman does not tell the truth on,” Nelson told Breitbart News last week. “Do I think that Beverly is trustworthy? No, I really don’t. Could I see her making it up? …The odds are in that favor.”

The authenticity of Roy Moore’s alleged signature on Young’s yearbook has also been called into question and Gloria Allred is refusing to release it immediately for an independent investigation.