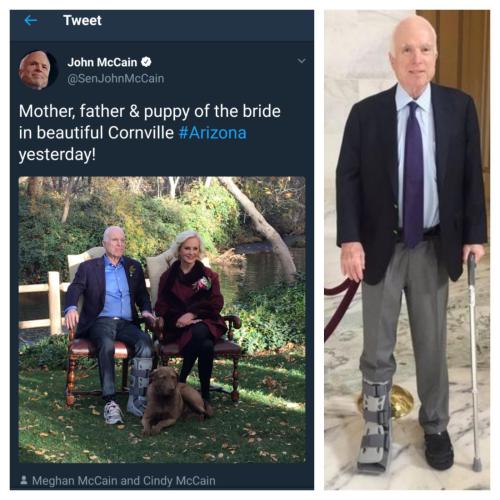 Remember this pic of Sen. John McCain on November 6, 2017, wearing an orthopedic or walking boot on his right foot?

We are told he needed the boot because of a “minor tear” in his right Achilles’ tendon.

Coincidentally, Hillary Clinton also has an orthopedic boot on her right foot, ostensibly because she had broken her right foot’s big toe when she “ran downstairs in heels and fell backward”.

That gave rise to speculations on the Alternative Media that McCain’s and Hillary’s boots are not for their respective torn Achilles’ tendon and broken big toe. They have those walking boots on to conceal their ankle monitors. See “Are Hillary’s and John McCain’s orthopedic boots actually ankle bracelets?”

This morning, McCain tweeted a pic of himself and his wife, Cindy, which lends credence to that conspiracy theory.

His orthopedic boot in now on his left foot! LOL

By the way, the above right picture is not “mirrored” or flipped because it correctly shows the buttons on the right side of McCain’s jacket, consistent with men’s jackets.