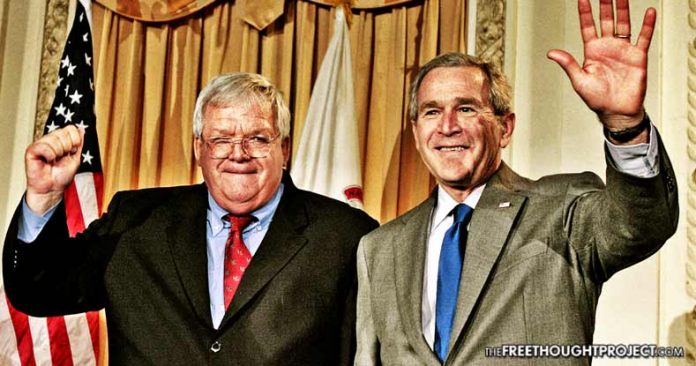 A judge has chosen to protect former U.S. House speaker and admitted child rapist, Dennis Hastert, by throwing out a lawsuit filed by a man who claims he was violently raped by Hastert when he was a child—and this is not the first time the man claims he has been denied justice.

According to a report from the Chicago Sun-Times, Judge Robert Pilmer dismissed the case citing the statute of limitations. The victim in the case, identified as “Richard Doe” in court documents, is the sixth individual to claim he was sexually assaulted by Hastert.

The man claimed that when he was in fourth grade in 1973, he was riding his bike in Yorkville, Illinois, when he stopped to use the restroom near Yorkville High School. His lawsuit states that a large man opened the door of the stall he was in, and then forcefully sodomized him.

The man said he saw his attacker’s face but did not recognize him. Hastert was a teacher at Yorkville High School at the time, and the man claims he ran into Hastert weeks later during gym class where Hastert“took the alleged victim by the neck, led him into the hallway, dropped to his knees and asked if he had told anyone about the assault.”

As the report from the Sun-Times noted, the man claims Hastert warned him against reporting at the time, “threatening that Hastert’s father was the sheriff and, if plaintiff told, his parents would be put in jail.” The lawsuit also claims that the man “tried to report the assault in the mid-1980s but was threatened with prosecution by then-Kendall County State’s Attorney Dallas Ingemunson for slandering Hastert’s name.”

The man identified as “Richard Doe” is not the first victim who has come forward accusing Hastert of sexual assault. According to a report from the Chicago Tribune, the other allegations against Hastert “stretch over a decade when they were teenagers and Hastert was their coach.”

In April 2016, Hastert confessed to sexually abusing “more than one student” while he was a teacher and wrestling coach in Illinois. However, Hastert was not charged for that abuse. Instead, he pleaded guilty to illegally structuring bank withdrawals to evade reporting rules for large transactions.

The money in question was part of a $5.3 million settlement Hastert promised a man whom he sexually assaulted when the victim was 14 years old. Hastert spent 13 months in prison for the illegally structured bank transactions and was released in July—two months early.

Hastert has also demanded that the individual he paid hush money to—only $1.7 million of the $5.3 million he promised—return the money. Hastert’s lawyers claimed that “To the extent any contract existed between plaintiff [Individual A] and defendant [Hastert], plaintiff breached that contract. Plaintiff’s breach of conduct resulted in damages to defendant and plaintiff is accordingly required to return $1.7 million to defendant.”

Judge Pilmer’s decision to throw out Richard Doe’s lawsuit against Dennis Hastert is yet another reminder that even though this politician has admitted to sexually assaulting multiple children, he is being protected by the law, and it is not likely that he will be held accountable for abusing, tormenting, and even demanding that hush money be returned from his victims.