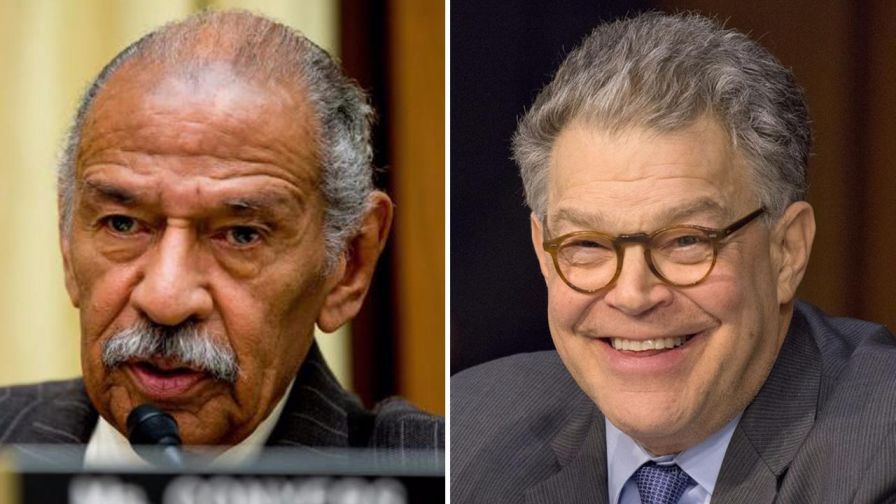 Most people are naïve about how intelligence operations are run. Holding damaging secrets on public figures equals the opportunity for blackmail. This strategy was probably discovered by cave men.

Where are all the names of these Congressmen? We’re now told that, in the past 10 years, $17 million has been paid out to accusers in small sums. An unknown part of that money was compensation for explicitly sexual offenses.

There are more cases where the accusers simply gave up and refused to pursue claims. They’re potentially waiting in the wings.

Not only are the Congressmen guilty, they’re open to blackmail. As they vote on bills; as they decide which lobbyists to favor; as they decide what advice to follow from intelligence agencies; as they decide whether to take meetings with agents from other countries; they’re always looking over their shoulders, wondering: HOW MUCH DO THESE PEOPLE KNOW ABOUT ME? WHAT SHOULD I DO TO STAY SAFE?

And in some hotel room, late at night, when a person slips them a folder with details of their sexual misdemeanors or felonies, what are they going to do? How are they going to resist whatever is being asked for?

This is the political elephant in the room the mainstream press isn’t talking about.

What about the NSA and the CIA and other spying agencies in the US (and other countries)? How much devastating information about sexual abuse have they gathered on these Congressmen?

How much covert control have the agencies chosen to exercise?

The levels of complexity can be dizzying. Suppose a guilty Congressman learns actual secrets about another politician? His impulse is to blow the whistle. But can he? What will he bring down on his own head?

I’LL KEEP YOUR SECRETS IF YOU KEEP MINE.

A BROTHERHOOD OF SECRET-KEEPERS.

An awareness, over the years, spreads through Congress: “Many of us are guilty and we need to protect each other.”

Because it isn’t just the sexual secrets anymore. It’s the subsequent immoral actions taken and not taken, based on being compromised. Based on being controlled.

“Appreciate your committee vote to kill the bill yesterday, Senator. I assure you that thing in Miami last summer…”

“When does our deal end? When are we even? This is worse than prison.”

“It’s not worse. And it never ends. But don’t worry, be happy. Keep playing the game. It’s no skin off your nose.”

“Please. You gave that away a long time ago. In Miami. But we also know about the hotel rooms in New York, Washington, Chicago, LA…”

The Congressman can’t believe the bind he’s in. He’s having the above conversation with a man from the CIA. He and the CIA are supposed to be on the same team. And they are, if he’ll understand who is higher in the pecking order, who gives the commands.

One day, he’ll wake up and realize that, among the four women he abused, three were innocent, but one was sent in by the Agency with the task of seducing him. If necessary, at a later date, she could use their night together as blackmail. (For a rough variation on this theme, see numerous accounts of NY Governor Eliot Spitzer’s 2008 hooker scandal, which caused his resignation from office. Spitzer was attacking Wall Street and Big Pharma.)

Then we come to the issue of reporters, who themselves could be compromised, because they’re secretly guilty of sexual abuse.

For example, long-time political reporter, Glenn Thrush (Politico, NY Times, MSNBC), has just been accused of kissing and groping four women. The Times has suspended him from his position covering the White House.

If Thrush, at any time, has been aware of politicians’ misdeeds, did he cover them and expose them fully—or was he “under the gun” to play ball because of his own secrets?

One could reasonably ask this question about Thrush’s relations with the 2016 Hillary Clinton campaign.

Case in point. WikiLeaks (October 2016) released an email from Thrush to John Podesta, Hillary’s campaign manager. Thrush was writing an article that referred to Podesta. He emailed Podesta part of the draft, asking him to “fact-check” it. Astonishingly, Thrush remarked in the email:

“No worries Because I have become a hack I will send u the whole section that pertains to u. Please don’t share or tell anyone I did this. Tell me if I fucked up anything.”

Politico’s vice president of communications, Brad Dayspring, made an impassioned and transparently moronic defense of his reporter:

“Glenn is one of the top political reporters in the country [!], in no small part because he understands that it is his job to get inside information, not appear perfect when someone illegally hacks email [!]…I can speak with firsthand knowledge and experience that Glenn checks the validity of often complex reporting with everybody, on both sides of the aisle.”

So who is Brad Dayspring, the ardent defender of his “top political reporter?”

Maybe it’s a stretch, but I’d say the level of intelligence Dayspring exhibited in defending Glenn Thrush is matched by his interest in SexyTwitPics.

One of the elephants in the room is, of course, Bill Clinton. For several decades, people having been writing about his sexual predations. It’s assumed that he and his allies (including his wife) have been able to avoid final excommunication from politics because of their power—but it would be foolish to assume he has been free from blackmail.

In other words, the Clintons may have nine lives precisely BECAUSE they made a deal with the devil…