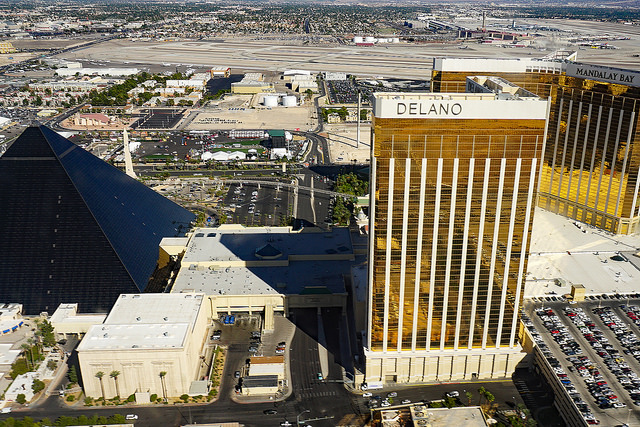 An eyewitness who was riding in a taxi saw several gunman firing full-auto bursts at the corner of Mandalay Bay Rd and Las Vegas Blvd at 9:50 p.m., ten minutes before the shooting officially started

LAS VEGAS (INTELLIHUB) — A man who wishes to remain anonymous recently told End Times News Report’s Jake Morphonios that there were multiple gunmen on the corner of Mandalay Bay Rd and Las Vegas Blvd at 9:50 p.m., ten minutes before the shooting officially started.

The man told End Times News Report that he was “up in the Delano hanging out with some friends” on the night of October 1 when a female friend of his decided to grab an Uber and and “go meet up with some other friends of hers” at another location.

“She got picked up in an Uber down at the Delano valet,” he said. “She called me about five minutes later and I know the exact time she called because the timestamp is still on my cell phone — 9:55 p.m. — she called me at 9:55 p.m.”

“As soon as I answered she tells me that there are shooters on the ground down in the street,” he explained. “Las Vegas Blvd was full of traffic so she hadn’t made it very far away.”

The man said that the woman’s Uber ride had just turned onto the boulevard when she told him that she saw several gunmen.

“When she first called to tell me what she was seeing I thought she was joking but then I heard gunshots myself,” the woman’s friend explained. “It sounded like automatic gunfire.”

The man also noted that his friend told him that the armed men did not appear to be law enforcement officers.

As Morphonios points out in his video, the man’s testimony is extremely alarming because the shooting did not officially start until 10:05 p.m.

Additionally, it is important to point out, on Oct. 14 Intellihub confirmed with shooting survivor Rick Ardito during a phone interview that the ‘firecracker sounds’ heard by various witnesses inside the concert venue before the shooting was, in fact, actual firecrackers (i.e. Rick Ardito visibly saw the firecrackers detonating in the crowd just feet in front of him.) However, what’s to say those firecrackers weren’t used as a diversion to mask the sound of actual gunfire?

Not to mention, at least one police officer reported hearing gunfire coming from the very same intersection the woman witnessed the gunmen.

Were gunmen on the ground before, during, and after the Las Vegas Massacre?

Were gunmen on the ground before, during, and after the #LasVegasMassacre?