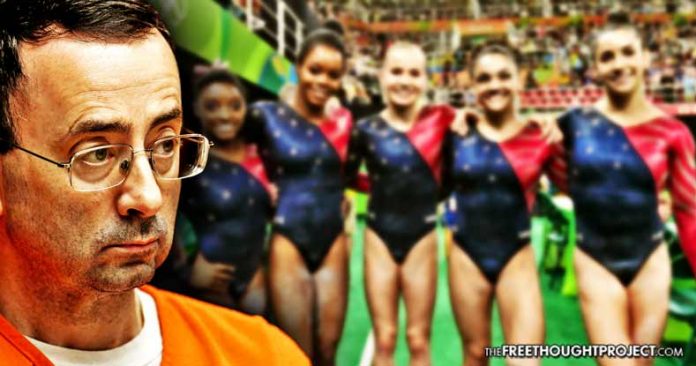 A massive case involving over a hundred women and girls is shining a light on the horrid sexual abuse and cover-up taking place within the USA Gymnastics program. For decades children were “sacrificed” and their abusers “protected,” according to one of the victims. Now, the man at the center of the depravity has pleaded guilty to multiple charges of sexual assault this week and faces 25 years in prison.

Larry Nassar, 54, faced charges of first-degree criminal sexual conduct for molesting several girls. Nassar was accused of molesting the girls under the guise of providing treatment and the staff inside the program was accused of helping him cover it up.

The horrid nightmare that is sexual abuse within the US Olympic gymnastics program was brought to light last August when former gymnast Rachael Denhollander called for a regime change within the organization. Denhollander is one of more than 125 victims, including US Olympic champion and three-time gold medalist, Aly Raisman, who came forward with evidence of cover-ups and abuse.

As USA Today reported, in a joint interview with USA TODAY Sports and the Associated Press on Saturday, Raisman said revelations of widespread abuse by longtime team physician Larry Nassar and the reaction by the governing bodies has colored how she views her sport.

“The people at the very top, that work at the office every single day at USA Gymnastics, they need to do better,” Raisman said.

“But I don’t support how USA Gymnastics is handling everything right now.”

Earlier this month, Raisman revealed that she had been molested in a CBS News 60 Minutes interview. She was captain of the teams that won gold medals for the United States at the London and Rio Olympics in 2012 and 2016.

“I am angry,” Raisman said. “I’m really upset because I care a lot, when I see these young girls that come up to me, and they ask for pictures or autographs, whatever it is, every time I look at them, every time I see them smiling, I just think I just want to create change so that they never, ever have to go through this.”

“For me, the scariest night of my life happened when I was 15 years old. I had flown all day and night with the team to get to Tokyo. He’d given me a sleeping pill for the flight, and the next thing I know, I was all alone with him in his hotel room getting a ‘treatment.’ I thought I was going to die that night,” USA Gymnast McKayla Maroney wrote on Twitter before her account was deactivated.

Denhollander and another former gymnast, Jamie Dantzcher, are demanding the leadership of USA Gymnastics be removed immediately.

“The painful reality is that no one on the board of USAG can be trusted on the issue of sexual assault,” Denhollander said.

“Culture of abuse at USAG had created institutional dynamics where over and over and over again predators were protected and the children were sacrificed.”

According to ABC 7, they are asking for USAG Chairman Paul Parilla, Vice Chairman Jay Binder and Treasurer Bitsy Kelley to be removed. The gymnasts are not only accusing the leadership of ignoring the suspected abuse, but trying to cover it up.

“No one from USA Gymnastics has apologized nor accepted any responsibility for Nassar’s assaults on dozens of USA gymnasts,” Dantzcher said.

The board denies covering up the abuse of over 125 girls, however, the odds of that many girls all conspiring to form a false case are fairly slim — not to mention all the cases of abusers who’ve already been sentenced.

In a statement to ABC 7, the USAG said, “We are confident our board officers will continue to lead us through the coming months while we strengthen our culture that has safe sport as a top priority throughout our organization.”

“What people don’t realize is that this doctor was a doctor for 29 years,” Raisman. “Whether or not he did it to a gymnast, they still knew him. Even if he didn’t do it to you, it’s still the trauma and the anxiety of wondering what could have happened. I think that needs to be addressed. These girls, they should be comfortable going to USA Gymnastics and saying ‘I need help, I want therapy. I need this.’”

As TFTP previously reported, what these former victims are exposing is also backed up by an investigation by the IndyStar which revealed that top executives at one of America’s most prominent Olympic organizations failed to alert authorities to many allegations of sexual abuse by coaches — relying on a policy that enabled predators to abuse gymnasts long after USA Gymnastics had received warnings.

According to the investigation, USA Gymnastics would not disclose the total number of sexual misconduct allegations it receives each year. But records show the organization compiled complaint dossiers on more than 50 coaches and filed them in a drawer in its executive office in Indianapolis.

During a 2013 lawsuit, two former USAG officials admitted under oath to routinely covering up sexual abuse allegations. Because of this case, the contents of all the complaint dossiers mentioned above remain sealed. The IndyStar is seeking to make them public.

The reality is that USAG officials have been raping and abusing girls for decades and they were allowed to do so under the cover of the organization. Only after a handful of the predators became so active in their abuse were they caught by law enforcement.

One such case, involving William McCabe, revealed how USAG covered for him for nearly a decade while he preyed on young girls. Mulitple complaints were swept under the rug as the man preyed on children — despite one gym owner warning the USAG in 1998 that McCabe “should be locked in a cage before someone is raped.”

He wasn’t arrested until the mother in the 2013 lawsuit went to the FBI with concerns over McCabe emailing her then-11-year-old daughter.

As the IndyStar reports, McCabe was charged with molesting gymnasts, secretly videotaping girls changing clothes and posting their naked pictures on the internet. He pleaded guilty in 2006 in Savannah, Georgia, to federal charges of sexual exploitation of children and making false statements. He is serving a 30-year sentence.

The price of having one of the best gymnastics teams in the world is apparently steep.

Shelley Haymaker, an Indiana attorney who represents abuse victims in child welfare cases, said USA Gymnastics’ approach “sickens” her, according to the IndyStar.

“USAG may not have been the hand that ultimately abused these innocent children,” Haymaker said, “but it was definitely the arm.”