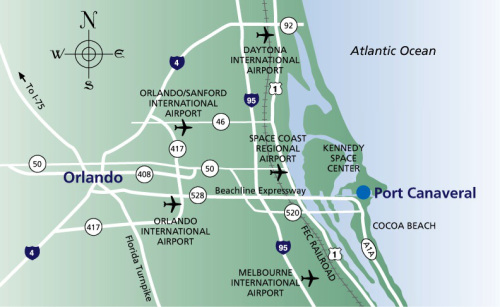 This post was originally published at Fellowship of the Minds

Port Canaveral in Brevard County, Florida, is one of the busiest cargo and cruise ports in the world, with fuel accounting for 75% of the cargo in 2011. It is also a naval port adjacent to the U.S. strategic ballistic missile nuclear submarine base, as well as close to U.S. Air Force facilities and NASA’s Kennedy Space Center. As such, Port Canaveral is critical to America’s national security.

Americans recently learned of how our national security was compromised by the Obama administration’s and then-Secretary of State Hillary Clinton’s approval of the Uranium One deal that gave Russia 20% of our uranium reserves.

In an op/ed for The Washington Times on Nov. 23, 2017, retired U.S. Navy admiral and commander in chief of the U.S. Pacific Fleet James A. Lyons alerts us to another security compromise by the Obama administration — the 35-year lease of Port Canaveral with no security review to the Middle East company Gulftainer, which Admiral Lyons calls a “serious security compromise” to both the Port and its adjacent military infrastructure.

Gulftainer is co-owned by the Iraqi Jafar family and the emir of Sharjah in the United Arab Emirates. Gulftainer is also connected to the Russian-controlled Rostec firm that owns 100% of Rosoboronexport, the exporter of Russia’s Club-K container cruise missile system. The system looks like a typical commercial shipping container, which means it can be transported around the United States carrying missiles that can be remotely activated by satellite.

According to Jerome Corsi, in a World Net Daily article, the Committee on Foreign Investment in the United States (CFIUS) — which should have reviewed the Port Canaveral lease — was bypassed by President Obama’s Treasury secretary, Jack Lew, who previously was Bill Clinton’s chief of staff.

Mr. Lew’s decision may have been further enabled by Aimen Nabi Mir, his designated staff chairman for CFIUS (2009-14). Mr. Mir is the son of a Pakistani immigrant from Kashmir who has ties to the Pakistani Intelligence Service. Mr. Mir himself served twice as the head of the Islamic Society of North America’s (ISNA) youth wing.

It will be recalled, ISNA not only is a Muslim Brotherhood front group, but was listed by the Department of Justice as an unindicted co-conspirator in the 2008 Holy Land Foundation Hamas terror funding trial. It was during Mr. Mir’s CFIUS tenure that both the Gulftainer deal and the Uranium One deal were allowed to slip through.

Gulftainer is co-owned by Hamid Jafar and his brother Jafar Dhia Jofa, Saddam Hussein’s nuclear weapon mastermind and the emir of Sharjah. By way of character reference, Mr. Jafar was on U.S. Central Command’s hit list and could be engaged at any time as a legitimate military target during Operation Iraqi Freedom. Working for Saddam Hussein and in close collaboration with the Russians, Mr. Jafar’s succeeded in designing the “Beach Ball,” a miniaturized nuclear warhead that can fit on the Club-K cruise missile.

A model of North Korea’s miniaturized nuclear weapon appears very similar to Mr. Jafar’s Beach Ball and was seen in a 2017 photo with Kim Jong-un.

The fact that the Iraqi Jafar family is in a joint venture with Russia’s Rostec should have raised red flags all over the place, but that was not going to be allowed to happen. You have to ask, what were the FBI and our intelligence agencies doing? Were they complicit in behind-the-scenes negotiations for the lease?

Since the Club-K container looks like a typical commercial shipping container, it can be shipped around the country by train, semi-trucks and riverine boat. More troubling yet is the fact that it can then be activated remotely by satellite.

As Roger Aronoff stated in a Jan. 5, 2017 article, approval of the 35-year lease to Gulftainer is a clear case of malfeasance and comes at the expense of our national security and American safety. The Center for Security Policy paper by Alan Jones and Mary Fanning shows that Gulftainer’s parent company, the Crescent Group, is also connected to Iraq’s illicit nuclear weapons program under Saddam Hussein.

Additionally, Hamid Jafar is founder and chairman of the Crescent Group, the parent firm of which Port Canaveral’s Gulftainer USA is a subsidiary. His brother, Jafar, Saddam Hussein’s nuclear scientist, is the CFO of Crescent’s URUK Engineering and Contracting subsidiary.

Not surprisingly, there is a Clinton connection to the Crescent Group. Majid Jafar, brother of the head of the Crescent Group and Mr. Jafar’s nephew, co-chairs with Bill Clinton the Business Backs Education Campaign, which was launched in 2014, the same year that the UAE made its first donation to the Clinton Foundation. The campaign is funded by the Varkey GEMs Foundation, which paid Bill Clinton $5.6 million to serve as honorary chairman. He didn’t even have to give a speech.

The bottom line is that we don’t know how many Club-K missile containers have been or might one day be shipped through Port Canaveral. Even one could cause incalculable damage. In view of the seriousness of the threat, however, and the fact that the 35-year lease was never subjected to a security review, it must be immediately suspended and eventually canceled.