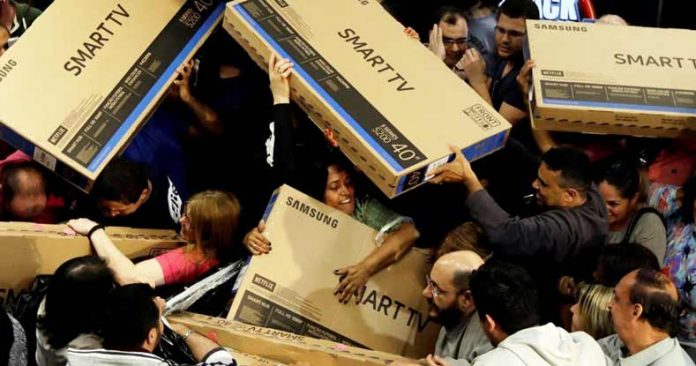 Before their Thanksgiving dinners could settle, many Americans left their family atmospheres and descended upon department stores and big-box retailers across the country to partake in rampant and apparently violent Black Friday consumerism.

Mindless shoppers aren’t even getting the great discounts they cherish since retailers artificially inflate prices of goods in the months before the sales in order to make the subsequent discounts look good in comparison. Also, even if shoppers do manage to grab some genuine discounts, they will invariably buy another product that has a 98 percent markup value.

If we take a step back to observe this downright insanity, it is getting difficult to differentiate between Frank Darabont’s Walking Dead and Black Friday shoppers.

As the shopping began late Thursday night, so did the disgusting display savagery and greed.

Immediately after listing how thankful they were for everything in their lives, people fled to the store to fill their lives with more things. So far, two people have been killed and countless videos are popping up of consumers shoving, hitting, and knocking each other over — to get a bargain.

The examples below show that the Black Friday savagery is as inevitable as the tide.

In spite of police stepping up their presences to battle the notoriously violent Black Friday stampedes, it appears that the threat of being arrested and jailed is no deterrent to those unable to resist a sale.

An entire mall in Hoover, Alabama was forced to shut down after brawls erupted inside. The shoe-laden battle was captured on video from a bystander showing scattered clothes and displays as security and cops tore angry women apart.

Footage shows women wrestling with each other on the floor as police and security try to pull them apart in front of a crowd including young children—who happened to be out shopping close to midnight with their parents.

Nearby, a group of women fight as a police officer pulls one of them away and tries to handcuff her.

JUST IN: @HooverPD say they responded to several reports of fights at the Galleria Thursday night. Here's video of one incident outside the Buckle store. More on @WBRCnews this morning. pic.twitter.com/UZEZQGykGE

During the melee, it was reported that one of the many shoes being thrown struck a baby.

A number of women were arrested during the brawl inside the Riverchase Galleria mall in Hoover. In some of the comments on social media posted under the video, people reacted.

One shopper wrote: “My cousin and her family was there in lockdown at Build-a-bear. Soooo scary!”

Another added: “Who takes a baby to Black Friday!!!!”

A little further away in Columbia, Mo., shoppers gathered outside the Columbia Mall waiting for the doors to open, someone was shot.

Another video surfaced of grown men fighting over a toy car.

Another video shows people trampling each other as the doors open to a department store.

When you wake up thinking that today is a good day to pop in at the shops. #BlackFriday pic.twitter.com/G2dQ77krlG

It’s not just America either, this Black Friday madness was witnessed in other countries too. Huge crowds can be seen swarming a stack of Samsung Smart TVs and carrying them away in a department store in Sao Paulo, Brazil. 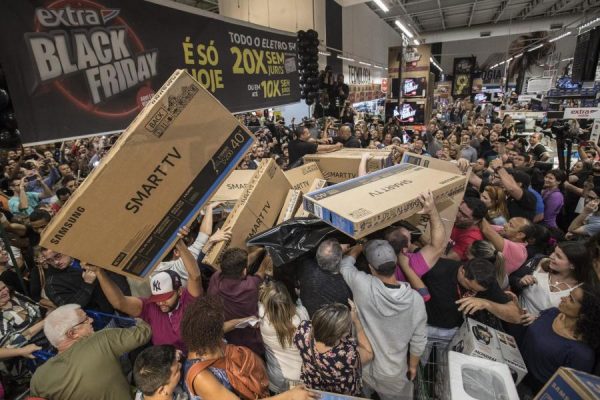 There is a silver lining to this year’s most violent shopping day in history, however. For years, TFTP has reported on the insanity that is Black Friday shopping violence and this year appears to have less of it.

Maybe, just maybe, after watching the countless videos of people losing their minds and trampling each other for a cheap television, maybe we, as a species, are becoming less apt to employ violence in our consumerism. Maybe.