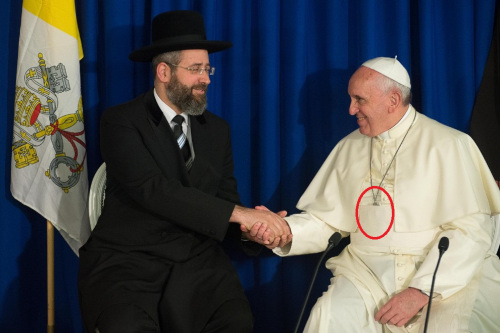 About two weeks ago, I posted about Cardinal Gerhard Müller sounding the alarm that there is a “pervading sense of fear” in Pope Francis’ Curia — the administrative body of the Holy See in Vatican City, Rome. Müller had served five years as prefect of the Congregation for the Doctrine of the Faith until this July, when Pope Francis decided not to renew his term for reasons Müller said had never been explained to him.

Müller wasn’t exaggerating or being a false alarmist. Nearly two years ago, I’d posted about the sorry situation of the Catholic Church under Pope Francis, wherein critics are censored and threatened with excommunication.

Alessandro Maria Minutella, 44, is a priest in Sicily nationally known for his open criticism of Pope Francis’ controversial Amoris Laetitia “apostalic exhortation” and what Minutella calls “the false Church of modernism”.

Because of his outspoken defense of the traditional Catholic faith, Minutella was officially removed from his parish and forbidden to celebrate Mass, administer the Sacraments, or preach. He was ordered to remain silent for nine months, which he obeyed, although he was attacked and vilified by the Italian media, especially by the satirical TV show, The Hyenas.

After observing silence for 9 months, Minutella was threatened by the Curia that he would receive a “double excommunication” (whatever that means) if he did not make two public acts of fidelity to Pope Francis on social networks. Never mind the fact that pedophile and openly homosexual priests are not excommunicated. (See “Pope Francis’ Vatican: a cesspool of pedophiles and homosexuals“)

On November 9, 2017, sitting at a desk with a statue of St. Michael the Archangel, Alessandro Minutella recorded this video as his impassioned response, which was broadcast on Radio Domina Nostra.

Some excerpts of Minutella’s speech:

Note: Corrado Lorefice was appointed Archbishop of Palermo, Sicily, by Pope Francis in October 2015. In June 2017 Lorefice donated a chapel to serve as a synagogue for the Jewish community of Naples. He has written favorably about the neo-Marxist liberation theology.

“Last March, I was obliged to remain silent on all social networks . . . for having spoken the truth on the false church. I have known moral persecution and have been practically reduced to being an exile” — his priesthood “unjustly scorned” and his reputation “ruined” and “derided”.

Minutella vows that he will continue “to raise my voice in defense of the Catholic faith which today is being jeopardized like never before,” and decries Pope Francis’ so-called “Church of Mercy” that “runs to all the Italian ports to welcome the poor immigrants, but then brings to the guillotine those who don’t adhere to its single line of thought of dictatorial nature. These people are not afraid of me who can easily be eliminated — I have no bodyguards and no defense . . . . Holy mother Church has been occupied, because we are speaking of a true invasion,” which Minutella calls a “heretical deception . . . that reevaluates Martin Luther to the point of considering him a holy reformer”.