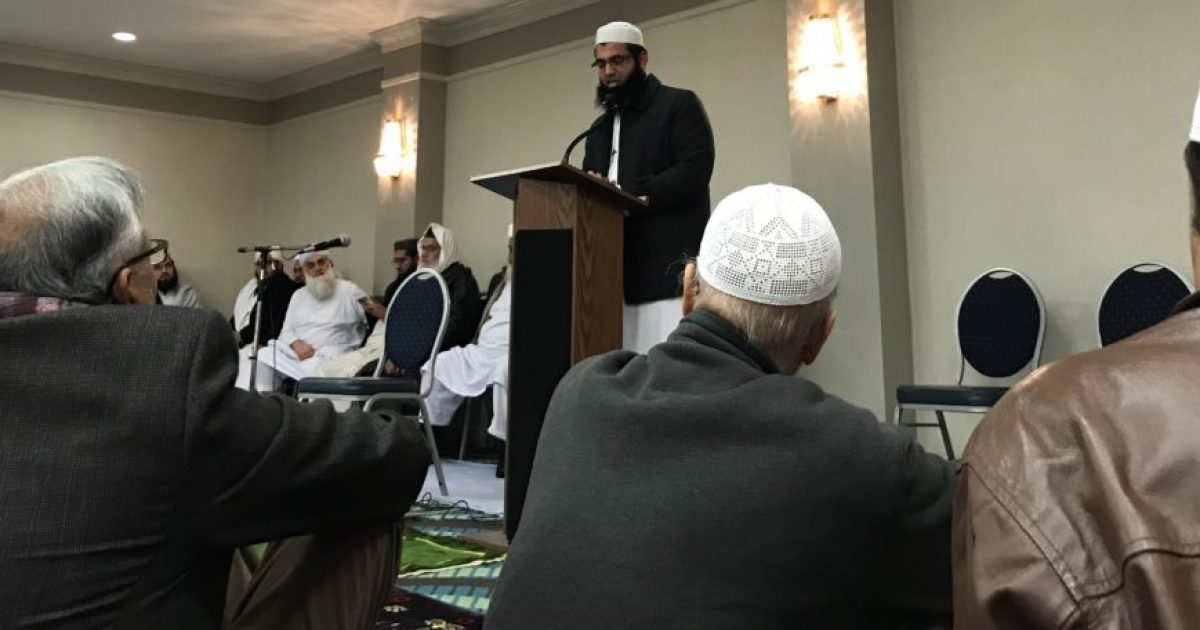 “The elites of Mecca would use every possible measure to coerce or contain Muhammad‘s call for change within specific parameters.  Those parameters would permit the changing of anything that did not threaten their system and infringe on their power. But this message is not here to integrate. It is here to dominate. Islam is here to dominate! This was an ideological struggle, the sole purpose of which was to organize Man’s affairs in accordance with a system revealed by Allah.” –Haitham Ibn Thbait, of the American chapter of Hizb Ut-Tahrir

That statement above is now garnering more support from more Islamists in America.  Listen and wake up!

A recent report from Rabwah Times documented a recent event in which Muslims in Virginia calling for infidels (non-Muslims) to “accept the holy book [the Koran]” or “they have to be forced.”

Ehsan Rehan reported as his team went undercover to the event:

Pakistan born Islamic cleric Rafiq Khan defined America as “The land of Infidels” at a fundraiser for his Islamic charity this Saturday. The event which was held at a Holiday Inn in Springfield, Virginia attracted over 100 participants. Speakers included an Islamist from Pakistan as well as radical Imams from the states of Maryland, Virginia, and Texas. The conference revolved around the topics of Jihad, Infidels and what can the American Muslim community do to counter conspiracies against Islam.

The event’s keynote speaker was Habib-ur-Rehman Ludhianvi, a visiting Islamic cleric from Pakistan. In a 2016 piece, Ludhianvi who serves as the editor of monthly Millia magazine claimed that America was behind the assassination of former Pakistani Prime Minister Benazir Bhutto.

Ludhianavi, who is also the principal of the Islamic seminary Dar-ul-Uloom located in the Pakistani city of Faisalabad claimed that ‘ignorant Infidels’ need to be dealt with force, He said:

“They are ignorant and there is no need for dialogue with them, God has given them two options, one is the holy book and one is the stick [Force] and if one does not accept the holy book they have to be forced.”

Ludhianvi also urged American Muslim Lawyers to use the American Justice system to restrict the religious freedom of Ahmadis:

“Have all Muslim lawyers died, why cant they learn and understand U.S. laws and then go present their case in front of the judge and explain that Qadianis [Ahmadis] are disrespecting Islam……..Islam is our faith and they [Ahmadis] are portraying their religious beliefs as Islamic beliefs ……. it should be made criminal for them to do so.”

The Ahmadis who are referenced here are considered heretics by the majority of mainstream Muslims as they believe in another Prophet after Prophet Muhammad and have a different understanding of Jihad.

While the Islamists did hit on a point that we have also pointed to and that is an attack on the family, Ludhianvi issued a fatwa in his magazine last year that basically seek chain women inside their home, not allow her to use a cell phone in public and ban her from wearing high heel shoes.

I’m not willing to go that far seeing as how the Bible presents us with an industrious woman FROM the home.  Her home is where she pours her energy and love (Titus 2:3-4), but she is also a good businesswoman who trusts her husband and cares for her family (Proverbs 31).

The Jamia Binoria seminary is the source of many extreme Islamic teachings which include support for Suicide attacks and the death penalty for apostates. Other Fatwas issued by Jamia Binoria include:

Finally, Ludhianvi also warned the US government to “stop giving refuge to the adherents of the Qadiani faith [Ahmadis]” who he claimed were worse than Jews & Christians.

I don’t know about you, but this is nothing more than treason.  This is clearly setting up teaching to overthrow the government of the united States and establish Islamic law here.

Where is the Attorney General in Virginia?

Where is the Governor?

Oh wait, they are Democrats.  They are complicit in this treason.