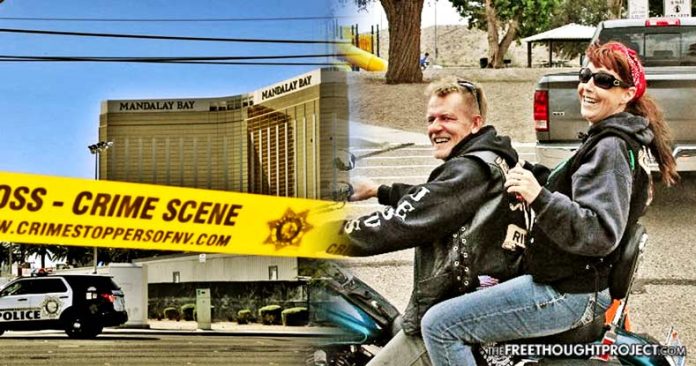 Nearly two months after the Las Vegas shooting, five of the individuals who attended the Route 91 Harvest music festival have lost their lives—but the circumstances that led up their deaths had nothing to do with injuries they sustained during the shooting.

The most recent Vegas survivor to lose meet an early and violent demise was Roy McClellan, 52, who was killed when a Chevrolet Camaro plowed him down and then sped off in a hit and run.

A Las Vegas man survives the Route 91 shooting massacre, only to die in hit-and-run crash. Coming up at 6, his widow speaks only to @News3LV. pic.twitter.com/bCxJBSJpyo

“I don’t understand why he wasn’t taken at the shooting, but a month later he was taken this way,” McClellan’s widow, Denise, told KSNV. “I hope my husband found peace and he’s safe now.”

The shooting “was really messing” with McClellan’s head and “he was going to therapy,” she told the affiliate.

Authorities found the car involved in the crash and charges against the driver are pending, KSNV reported.

McClellan’s death is as tragic as it is suspicious given that he has become the 5th survivor of the Route 91 Music Festival to have his life tragically come to an abrupt end.

According to a report, 28-year-old Kymberley Suchomel died at her home in Apple Valley, California, just one week after the massacre. While the official cause of her death was not immediately released, her grandmother told the Victorville Daily Press that she appeared to have died in her sleep.

“Kymberley had epilepsy and she’s always been prone to seizures — she told her friend that she recently had three focal seizures,” Julie Norton said. “I believe the stress from the shooting took her life.”

The day after the shooting, Suchomel recounted the horrific details to the Daily Press. Although she miraculously escaped from the chaotic scene with no injuries, she said, “I might have escaped unharmed, but I know that I’ve been emotionally and mentally scarred for life.”

“I’m most definitely in a state of shock and it will take some time for me to get over this,” Suchomel said on Oct. 2.“I haven’t been able to sleep and I still keep hearing the sound of loud pops in my head.”

After she managed to flee from the scene of the shooting, Suchomel said she went back to the hotel where she was staying with friends, gathered her belongings and returned to her home as quickly as possible to see her husband, Mike, and her 3-year-old daughter, Scarlet.

Just days later, Suchomel’s grandmother arrived at her home to find her dead in her bed.

Dennis and Lorraine Carver also died mysteriously when their car exploded on Oct. 16, just weeks after they survived the Las Vegas Shooting. The couple’s 16-year-old daughter, Madison, told the Las Vegas Review-Journal that she heard a loud bang outside of her window and “when she ran down the street and rounded the corner, a familiar vehicle engulfed in flames came into view”

Dennis, 52, and Lorraine, 53, “died together less than half a mile from their home.” The Riverside County Fire Department claimed that their vehicle “crashed into a metal gate” and it took firefighters “nearly an hour to completely put out the fire,” according to the report.

The Carvers had also managed to escape the shooting with no injuries, and their 20-year-old daughter, Brooke, told the Review-Journal that as soon as her parents realized gunfire broke out during the music festival, her dad jumped on top of her mom to shield her from the bullets.

“We were so relieved when they got out of the shooting alive,” Brooke Carver said. “But I also think we’ve been given little pieces of them that we would’ve never gotten if the shooting hadn’t happened right before they died.”

Danny Contreras was also found dead at 7:05 a.m. last month in his Las Vegas home. Like Suchomel, Contreras went public with his eyewitness account of multiple shooters. Only a few days after claiming there were multiple shooters in the Las Vegas massacre, he would be gunned down in his own home with no witnesses to the murder.

There is still an endless number of questions surrounding how the Las Vegas Shooting unfolded, the history of the suspected shooter, the response from law enforcement, and why evidence such as the hotel’s surveillance footage has yet to be released.

Now, as the families of hundreds of victims search for answers, the families of Dennis and Lorraine Carver, Roy McClellan, Danny Contreras,  and Kymberley Suchomel are left searching for answers about why their loved ones died, and if their deaths had any connections to the horrific massacre they witnessed.