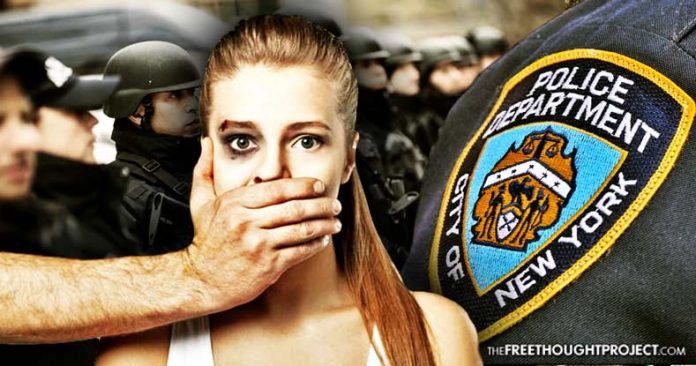 New York, NY — An 18-year-old girl says that she was raped in a police van by two NYPD officers and that nine officers later came to the hospital afterward to intimidate the girl and her mother out of pressing charges.

On September 15, victim Anna Chambers was pulled over by NYPD narcotics detectives Richard Hall and Eddie Martins and accused of having drugs. The officers handcuffed Chambers, forced her into the police van and told her to undress under the pretense of searching for drugs. Both officers then proceeded to rape Chambers and throw her back out on the streets, without finding any drugs or charging her with a crime.

Chambers immediately contacted her mother and they went together to the local hospital for a rape kit examination. While Chambers and her mother were at the hospital, nine officers showed up to intimidate them into remaining silent about what happened.

“They came with nine cops to intimidate her and her mom, to discourage them from coming forward and reporting the rape and sex assault,” attorney Michael David, told The Post.

The officers accused Chambers of making a false report, and suggested that she had made accusations against cops in the past, which she has not.

“Anna said [the officer] was trying to manipulate a rubber band over his name tag, so she couldn’t see who it was,” David said.

“He kept saying to Anna and her mom, ‘How do you know they were real cops?’ ” David said.

According to David, a nurse witnessed the scene and told the mother, “Don’t be intimidated. Be strong. Be strong for your daughter.”

“The mom stood firm against the cop,” David said.

Chambers went ahead with the rape kit despite the intimidation, and the examination found traces of both officers DNA. Martins and Hall then switched up their story and admitted to having sex with Chambers, but claimed that it was consensual.

Mark Bederow, an attorney for Martins dismissed the DNA evidence against his clients, and suggested that they are being targeted because they are police officers.

“Being a police officer doesn’t change his right to due process. We unequivocally deny the allegation that he forcibly attacked the young woman. We don’t believe that the credible evidence will support the claim that any rape or sexual assault occurred,” Bederow said.

Martins and Hall are facing a total of 50 charges, including first-degree rape, first-degree criminal sexual act and second-degree kidnapping. Each could face up to 25 years in prison if convicted.

“There was zero consent. The cops were over 6 feet tall. She’s very petite, like 5-2 and maybe 100 pounds. There’s nothing she could do,” David said.

“I’m outraged. To me, it’s almost as outrageous as the crime that you have cops trying to intimidate her not to report the crime, trying to protect fellow cops,” David said.

NYPD Commissioner James O’Neill said the charges “tarnishe[d] all of the admirable things accomplished by other, good officers every day in neighborhoods across New York City.”

“Had these charges been upheld in an upcoming departmental trial, I would have fired them immediately,” O’Neill said in a statement on Monday.

The officers’ defense that this was a consensual interaction is absolutely ridiculous and unrealistic. Once an officer detains someone or impedes their free movement, nothing that takes place afterwards can every be consensual, because the person is not in that situation through their own volition—they are there under duress.