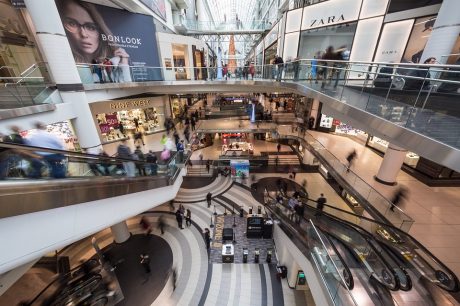 Did you know that the number of retail store closings in 2017 has already tripled the number from all of 2016?  Last year, a total of 2,056 store locations were closed down, but this year more than 6,700 stores have been shut down so far.  That absolutely shatters the all-time record for store closings in a single year, and yet nobody seems that concerned about it.  In 2008, an all-time record 6,163 retail stores were shuttered, and we have already surpassed that mark by a very wide margin.  We are facing an unprecedented retail apocalypse, and as you will see below, the number of retail store closings is actually supposed to be much higher next year.

Whenever the mainstream media reports on the retail apocalypse, they always try to put a positive spin on the story by blaming the growth of Amazon and other online retailers.  And without a doubt that has had an impact, but at this point online shopping still accounts for less than 10 percent of total U.S. retail sales.

Look, Amazon didn’t just show up to the party.  They have been around for many, many years and while it is true that they are growing, they still only account for a very small sliver of the overall retail pie.

So those that would like to explain away this retail apocalypse need to come up with a better explanation.

As I noted in the headline, there are 20 different major retail chains that have closed at least 50 stores so far this year.  The following numbers originally come from Fox Business…

If the U.S. economy was really doing well, then why are all of these major retailers closing down locations?

Of course the truth is that the economy is not doing well.  The U.S. economy has not grown by at least 3 percent in a single year since the middle of the Bush administration, and it isn’t going to happen this year either.  Overall, the U.S. economy has grown by an average of just 1.33 percent over the last 10 years, and meanwhile U.S. stock prices are up about 250 percent since the end of the last recession.  The stock market has become completely and utterly disconnected from economic reality, and yet many Americans still believe that it is an accurate barometer for the health of the economy.

I used to do a Black Friday article every year, but I have ended that tradition.  Yes, there were still a few scuffles this year, but at this point the much bigger story is how poorly the retailers are doing.

So far this year, more than 300 retailers have filed for bankruptcy, and we are currently on pace to lose over 147 million square feet of retail space by the end of 2017.

Those are absolutely catastrophic numbers.

And some analysts are already predicting that as many as 9,000 stores could be shut down in the United States in 2018.

Are we just going to keep blaming Amazon every time another retail chain goes belly up?

What we should really be focusing on is the fact that the “retail bubble” is starting to burst.  In the aftermath of the last financial crisis, retailers went on an unprecedented debt binge, and now a lot of that debt is starting to go bad.

In fact, in a previous article I discussed the fact that “the amount of high-yield retail debt that will mature next year is approximately 19 times larger than the amount that matured this year”.  This is going to have very serious implications on Wall Street, but very few people are really talking about this.

Most stores try to stay open through Christmas, but once the holiday season is over we will see another huge wave of store closings.

And as individual stores close down, this will put a lot of financial pressure on malls and shopping centers.  Not too long ago, one report projected that up to 25 percent of all shopping malls in the entire nation could close down by 2022, but I tend to think that number is too optimistic.

The retail industry in the United States is dying, and the biggest reason for that is not Amazon.

Rather, the real reason why the retail industry is in so much trouble is because of the steady decline of the middle class.  The gap between the ultra-wealthy and the rest of us is greater than ever, and we can clearly see the impact of this in the retail world.

Retailers that serve the very wealthy are generally doing well, and those that serve the other end of the food chain (such as dollar stores and Wal-Mart) are also doing okay.

But virtually all of the retailers that depend on middle class shoppers are really struggling, and this is going to continue for the foreseeable future.

Most American families are either living paycheck to paycheck or are close to that level, and these days U.S. consumers simply do not have much discretionary income to play around with.  More hard working Americans are going to fall out of the middle class with each passing month, and that is extremely bad news for a retail industry that is literally falling apart right in front of our eyes.