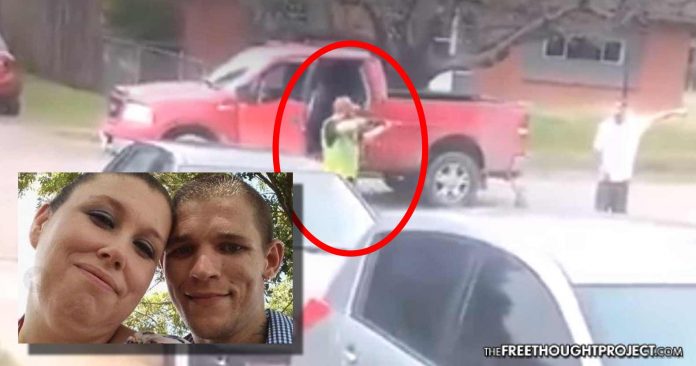 WARNING: The video below contains disturbing images of the argument and shooting of Curtis Shelley in Killeen, Texas. Several family members, including the victim’s grandmother and father, gave permission for this video to be republished.

Killeen, TX — Disturbing video of a murder in Killeen, Texas was published earlier this month by the family of the victim as they seek justice for their son who was murdered in broad daylight. Two weeks ago, the family took the video to the media in an effort to seek justice for Curtis E. Shelley after police refused to arrest his killer. Now, the Free Thought Project has learned that the killer was brought in for questions and despite the graphic video, was let go with no charges.

As TFTP reported at the time, the family is claiming that there has yet to be charges filed because the suspect, who has still yet to be identified by police, is a relative of one of the officers in the Killeen Police Department. An anonymous source told the Free Thought Project that the shooter in the video below is the son of a KPD officer. The victim’s grandmother has confirmed this as well.

Police officials said the Texas Rangers were invited to assist in the investigation into the Sunday death of Curtis E. Shelley after the alleged shooter’s connection to a department employee was discovered.

As KCEN reports, on Sunday, Nov. 12, officers were dispatched to the scene around 2:10 p.m. They found Shelley on the ground in the 1000 block of Cedar Drive with a gunshot wound. Officers said they performed life-saving measures until paramedics arrived, but Shelley did not survive.

The investigation determined that “the victim and suspect” were involved in an ongoing dispute, according to the Killeen Police Department.

As the video shows, the two men were engaged in an obvious dispute with the shooter training the gun on Shelley the entire time. As the situation appears to calm down, Shelley walks backward and the shooter has the chance to leave the scene. However, the shooter chooses not to leave and with no warning and without Shelly lunging or otherwise posing any threat, the man fired the shotgun.

The single shot dropped Shelley immediately and he died shortly after.

After viewing the video of the altercation, Channel 6 reports that their Legal Expert Liz Mitchell said it will be difficult for the shooting to be justified.

“I would say a self-defense claim would be very difficult in this case,”  Mitchell said “In this case, it’s kind of like that old saying you can’t bring a gun to a fist fight. The person in the white t-shirt doesn’t have a weapon or anything that would justify deadly force in this case.”

The family is now distraught for two reasons. The first reason is that they lost their beloved son, fiance, and grandson. The second reason is that the man—who is the son of a cop—who took his life has yet to be charged with a crime.

“When it happens to your family you want everything to hurry, something to be done and to feel like you’re getting closer to the truth. Now there’s the feeling of wanting the guy to at least be arrested,” Diane Shelley, the victim’s grandmother said.

“I wish they could move faster but they’re telling us to give them time to get everybody’s statements,” said Beverly Maire the victim’s fiance’.

As KCEN reports, the family said they asked the detective why the suspect has not been identified, arrested or charged. They claim the detective tells them it’s because they are still gathering evidence and witness statements.

However, this raises the question, how much more evidence do you need to at least bring someone in other than a video showing exactly what happened?

In regard to the video, the latest word from police is that they can’t verify the authenticity of it. As KDH News reports, KPD Cmdr. Erich Morsbach said Friday the department was aware of the video but did not verify its authenticity.

To add insult to murder, Morsbach said the department was not investigating the incident as a murder and did not address rumors the weapon used was a sawed-off shotgun.

When watching the video below, ask yourself what possible reason would deter police from going to the shooter’s house and immediately arresting him.

Curtis’ grandmother, Diane Shelley has since set up a change.org petition to demand justice for Curtis Shelley. You can sign that petition here.