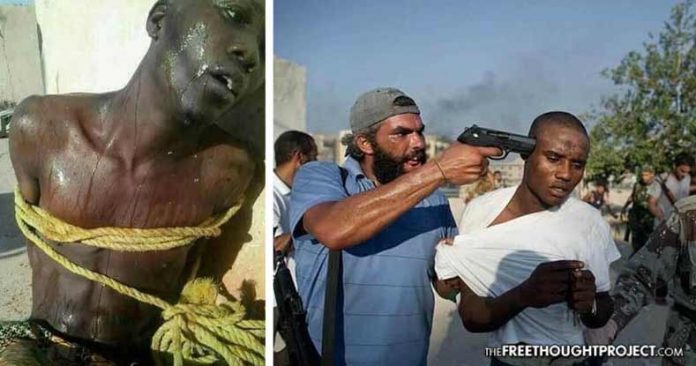 Last week, CNN published a report detailing the slave trade occurring in present-day Libya. While it’s easy to write off CNN as “fake news”, as the sitting President of the United States so infamously proclaims, a closer look into the phenomena of humans being sold at auction in the year 2017 confirms the unthinkable — slavery is mainstream again. However, CNN is not giving you the reason why people are being traded for cash, bought and sold at auction, for as little as $400.

According to the New York Times, the cause of the travesty goes all the way back to the United States’ backing of the so-called “Arab Spring,” an uprising which eventually led to the overthrow of Libya’s leader, Muammar Gaddafi.

Since the Arab Spring uprising of 2011 ended the brutal rule of Col. Muammar el-Qaddafi, Libya’s coast has became a hub for human trafficking and smuggling. That has fueled the illegal migration crisis that Europe has been scrambling to contain since 2014.

However, the destabilized hub for slavery and terrorism that we see today is not just from the Arab spring. The Obama Administration, led by then-Secretary of State, Hillary R. Clinton, orchestrated Qaddafi’s overthrow. Secretary Clinton even laughed at Qaddafi’s violent death, joking with a reporter upon hearing the news he’d been assassinated, “We came, we saw, he died.”

As TFTP reported last year, declassified emails revealed that NATO killed Gaddafi to stop the Libyan creation of a gold-backed currency. It is also important to note that no matter who would have been in office, this plan would’ve been carried out as it is the standard operating procedure of US foreign policy. A gold-backed currency is a threat to the establishment who knows no party lines.

Most astounding is the lengthy section delineating the huge threat that Gaddafi’s gold and silver reserves, estimated at “143 tons of gold, and a similar amount in silver,” posed to the French franc (CFA) circulating as a prime African currency.

The email makes clear that intelligence sources indicate the impetus behind the French attack on Libya was a calculated move to consolidate greater power, using NATO as a tool for imperialist conquest, not a humanitarian intervention as the public was falsely led to believe.

According to the email:

This gold was accumulated prior to the current rebellion and was intended to be used to establish a pan-African currency based on the Libyan golden Dinar. This plan was designed to provide the Francophone African Countries with an alternative to the French franc (CFA).

(Source Comment: According to knowledgeable individuals this quantity of gold and silver is valued at more than $7 billion. French intelligence officers discovered this plan shortly after the current rebellion began, and this was one of the factors that influenced President Nicolas Sarkozy’s decision to commit France to the attack on Libya.)

The email provides a peek behind the curtain to reveal how foreign policy is often carried out in practice. While reported in the media that the Western-backed Libyan military intervention was necessary to save human lives, the real driving factor behind the intervention was shown to be the fact that Gaddafi planned to create a high degree of economic independence with a new pan-African currency, which would lessen French influence and power in the region.

Once again, just like Iraq and Afghanistan, U.S. foreign policy (collusion and meddling) in Libya has resulted in the overthrow of the country’s leader and created unimaginable instability, not only in the country but also the region. Libya was once known as the most peaceful and civilized nation in Africa. Now, Libyan slave trading stands as proof the United States either did not think far enough ahead or could not care less what happens when they help insurgents overthrow a country.

Proof the crisis in Libya has led to slave trading comes from the United Nations’ Migration Agency, the IOM. The IOM’s envoy to Libya is Othman Belbeisi. The IOM’s Twitter account documented the slave trade, also referencing CNN’s work.

.@OthmanBelbeisi spoke to @camanpour earlier this evening about #Libya, the challenges facing #migrants in the country, the strength of the smuggling networks and the need for political, security and economic stability @CNN @UNMigration pic.twitter.com/7ezS8WvPNz

If you go to the market and you can pay between 200 and 500 dollars to get a migrant that will work with you on your daily jobs or support your work. After you buy, this person is handed over to you, again then it becomes your responsibility. Many of them escape, many of them are kept in bondage, and many of them are even imprisoned inside an area where they are forced to work on daily basis

WATCH: Africans being sold like animals in Arab countries. Slavery for blacks is still happening in 2017. #HumanTrafficking pic.twitter.com/DaNw4AR3rx

TFTP obtained video footage of such transactions. Euronews also reported on the phenomena taking place, whereby humans are being traded for as little as $200 cash. This week, Ivorians, returned to the Ivory Coast after having spent time in Libyan detention centers now being called “concentration camps.” Here’ are their eyewitness interviews conducted on the tarmac after deplaning in Abidjan, Ivory Coast.

Whether or not the photos are recent, or from some months back, citizens of the world are getting the message through alternative media outlets that Africans are being bought and sold in Libya. Rayon Pyne is one such person, a Jamaican, who posted the following graphic images to Facebook. He wrote:

As a result of the first-hand testimonies being given and the proclamations by the United Nation, Ivory Coast’s President Alassane Ouattara called on the International Criminal Court on Saturday to indict criminals who are selling black African migrants in Libyan slave markets. “I‘m shocked. I think it’s unacceptable, disgusting,” he declared.