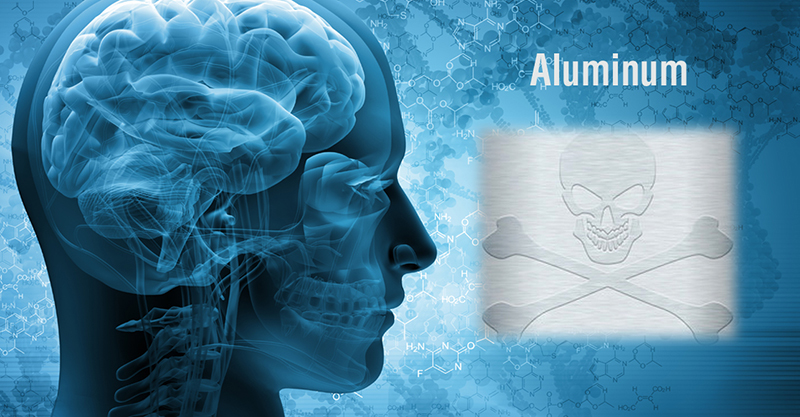 Here I am printing the abstract of a new study: “Aluminium in brain tissue in autism.” The publication is Journal of Trace Elements in Medicine and Biology.

From what I can see, the full text of the study has not been published yet. I’m interested to know exactly how the study authors obtained brain tissue samples from patients.

The findings? Shockingly high levels of aluminum were found in these brain samples. It’s widely acknowledged that aluminum can enter the brain and disrupt its functions.

Of course, aluminum is present in many vaccines.

Here is the abstract of the study. I’ve put several statements in caps for emphasis:

“Autism spectrum disorder is a neurodevelopmental disorder of unknown aetiology. It is suggested to involve both genetic susceptibility and environmental factors including in the latter environmental toxins. Human exposure to the environmental toxin aluminium has been linked, if tentatively, to autism spectrum disorder. Herein we have used transversely heated graphite furnace atomic absorption spectrometry to measure, for the first time, the aluminium content of brain tissue from donors with a diagnosis of autism. We have also used an aluminium-selective fluor to identify aluminium in brain tissue using fluorescence microscopy. THE ALUMINIUM CONTENT OF BRAIN TISSUE IN AUTISM WAS CONSISTENTLY HIGH. The mean (standard deviation) aluminium content across all 5 individuals for each lobe were 3.82(5.42), 2.30(2.00), 2.79(4.05) and 3.82(5.17) μg/g dry wt. for the occipital, frontal, temporal and parietal lobes respectively. THESE ARE SOME OF THE HIGHEST VALUES FOR ALUMINIUM IN HUMAN BRAIN TISSUE YET RECORDED AND ONE HAS TO QUESTION WHY, FOR EXAMPLE, THE ALUMINIUM CONTENT OF THE OCCIPITAL LOBE OF A 15 YEAR OLD BOY WOULD BE 8.74 (11.59) μg/g dry wt.? Aluminium-selective fluorescence microscopy was used to identify aluminium in brain tissue in 10 donors [10 donors or 5, as mentioned above?]. While aluminium was imaged associated with neurones it appeared to be present intracellularly in microglia-like cells and other inflammatory non-neuronal cells in the meninges, vasculature, grey and white matter. The pre-eminence of intracellular aluminium associated with non-neuronal cells was a standout observation in autism brain tissue and may offer clues as to both the origin of the brain aluminium as well as a putative role in autism spectrum disorder.”

The study authors mention “clues.” What about the many aluminum-containing childhood vaccines now on official schedules?

“What does this mean for today’s generation of children who receive 5,000 mcg of aluminum in vaccines by the age of 18 months and up to 5,250 additional mcg if all recommended boosters, HPV and meningitis vaccines are administered.”

This might well constitute a “clue,” pointing to where at least some of that highly toxic aluminum in autistic brains comes from.

As “the experts” deny this vaccine-aluminum-autism connection, I would suggest they back up their “science” by stepping forward themselves and taking ALL the vaccines on the official schedule, including boosters, in order to catch up with their shots. They should do this in the limited time recommended by public health agencies.

After all, if aluminum (and other toxic substances) in vaccines aren’t a problem, what do they have to lose?

They’re desperate to mandate the full load of vaccines for every man, woman, and child—so they should start with themselves.

Otherwise, they have no standing to make claims.

Neither do “science bloggers” who embrace every official mainstream study as if it were manna from heaven. To them, I offer the following quotes from two famous medical-journal editors, who have pored over more studies than these bloggers have dreamed of.

Marcia Angell, former editor of The New England Journal of Medicine, in the NY Review of Books, January 15, 2009, “Drug Companies & Doctors: A Story of Corruption”:

“It is simply no longer possible to believe much of the clinical research that is published, or to rely on the judgment of trusted physicians or authoritative medical guidelines. I take no pleasure in this conclusion, which I reached slowly and reluctantly over my two decades as an editor of The New England Journal of Medicine.”

“The case against science is straightforward: much of the scientific literature, perhaps half, may simply be untrue. Afflicted by studies with small sample sizes, tiny effects, invalid exploratory analyses, and flagrant conflicts of interest, together with an obsession for pursuing fashionable trends of dubious importance, science has taken a turn towards darkness…

“The apparent endemicity of bad research behaviour is alarming. In their quest for telling a compelling story, scientists too often sculpt data to fit their preferred theory of the world. Or they retrofit hypotheses to fit their data. Journal editors deserve their fair share of criticism too. We aid and abet the worst behaviours. Our acquiescence to the impact factor fuels an unhealthy competition to win a place in a select few journals. Our love of ‘significance’ pollutes the literature with many a statistical fairy-tale…Journals are not the only miscreants. Universities are in a perpetual struggle for money and talent…”

I want to see more on the new study showing shocking levels of aluminum in autistic people. I want to see funding provided to other researchers—INDEPENDENT RESEARCHERS with no ties to drug companies or government agencies—so they can follow up on the new study and come to their own conclusions.

And I want to see common sense applied to aluminum toxicity.

As in: why would anyone want to inject children with a known neurotoxin?

Would you be willing to spin the roulette wheel on YOUR child’s life and future and brain?