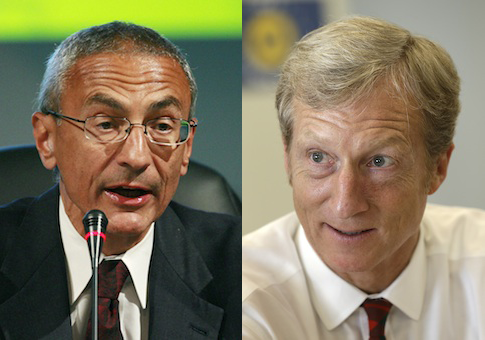 Just days before the 2016 presidential election, WikiLeaks published a collection of emails sent by and to John Podesta, a longtime Democratic Party operative who was White House chief of staff in Bill Clinton’s administration, White House counselor in the Obama administration and, most recently, chairman of Hillary Clinton’s 2016 presidential campaign.

Thanks to a tip on Voat, a hitherto obscure Podesta email takes on new significance because among its recipients is the man who is funding a $20 million national impeachment campaign against President Trump.

Below is a screenshot of the email, published by WikiLeaks (click to enlarge):

(1) Tom Steyer, 60, the cc recipient of the above email, is the billionaire Democrat who has launched a $20 million national campaign to impeach President Trump. In a televised video that you may have seen, Steyer calls President Trump “a clear and present danger who is mentally unstable and armed with nuclear weapons,” who has taken the U.S. “to the brink of nuclear war” and obstructed justice by firing former FBI Director James Comey, among other charges. (See “Billionaire Democrat Tom Steyer launches multi-million$ media campaign to impeach President Trump“)

Steyer’s impeachment campaign is doomed to failure because:

(2) Jim Steyer, 61, the sender of the cryptic “walnut sauce” email, is the older brother of Tom Steyer. A child advocate, civil rights attorney, Stanford University professor and author, Jim Steyer is most known for founding Common Sense Media, an organization dedicated to improving media and entertainment lives for kids and families. (Wikipedia)