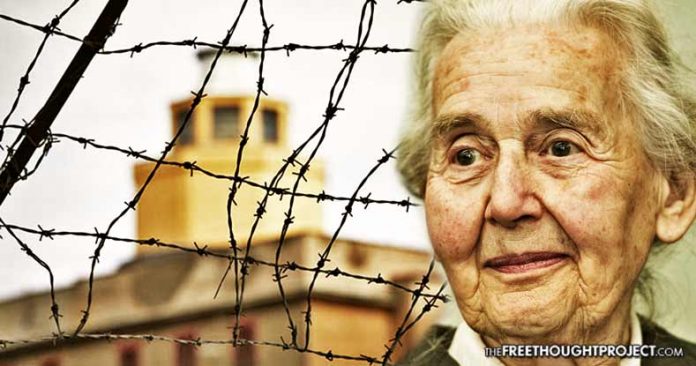 Detmold, Germany – An 89-year-old German woman was sentenced to 14 months in prison for incitement of racial hatred after losing an appeal on a prior conviction.

Ursula Haverbeck, often referred to in the German press as the “Nazi Grandma,” is known for extremist views that have run afoul of German hate speech laws in the past—with courts having previously given her fines and another suspended sedition sentence, according to Fox News.

In Germany, anyone who publicly denies, endorses or plays down the extermination of Jews during Adolf Hitler’s regime can be sentenced to a maximum of five years in jail for incitement of racial hatred.

Volksverhetzung, in English “incitement of the masses”, “instigation of the people”, is a concept in German criminal law that refers to incitement to hatred against segments of the population and refers to calls for violent or arbitrary measures against them, including assaults against the human dignity of others by insulting, maliciously maligning, or defaming segments of the population. It is often applied to, though not limited to, trials relating to Holocaust denial in Germany.

According to a report by German state-run broadcaster, Deutsche Welle (DW):

A German court in Detmold has sentenced Holocaust denier Ursula Haverbeck to 14 months in prison, after the 89-year-old woman lost her appeal to a prior conviction on Tuesday. However, four months were shaved off her original conviction of 18 months. Prosecutors wanted the sentence upheld, Haverbeck’s lawyers were seeking exoneration.

The Detmold court had initially sentenced Haverbeck to eight months imprisonment in September 2016, after she sent a letter to the town’s mayor, Rainer Heller, claiming that Auschwitz was not a concentration camp.

Following the trial, the octogenarian handed out pamphlets to journalists, as well as the judge and prosecutor, entitled “Only the truth will set you free,” in which she once again denied the Nazi atrocities. Haverbeck was handed an additional 10-month sentence for the stunt.

In the United States, incitement of violence is criminal but “assaults against human dignity of others by insulting, malicious maligning, or defaming segments of the population” are considered an exercise of free speech, and thus protected under the First Amendment.

Essentially, German law has criminalized speech as a means of controlling political discourse—meaning the government will tell you what is acceptable to say, and who is fair game to malign, and what groups and classes are protected.

While some speech may be extreme and repulsive, the prohibition on certain ideas, even the most repugnant, being put into the public marketplace of thought is a fast track to totalitarian governmental control—essentially legitimizing the “thought police.”

Haverbeck and her late husband Werner Georg Haverbeck, who was an active member of the Nazi party in the run-up to and during the Second World War, founded a right-wing education center called Collegium Humanum, which has been banned since 2008. She has also written for the right-wing magazine Stimme des Reiches (Voice of the Empire), which she also used to express her views that the Holocaust never took place.

Haverbeck has been sentenced on similar charges on five other occasions but has not yet served any jail time as she appeals the cases.

In October, she was sentenced to six months in prison by a Berlin court after being found guilty of inciting racial hatred for claiming the gas chambers at Auschwitz concentration camp “were not real.”

Prior to that, in August, she was given a two-year prison sentence by a regional court in Lower Saxony, according to DW.

The 89-year-old has appealed the rulings passed down against her in each case and claims she has been merely been repeating an opinion.

The most recent appeal verdict is not final, either, as Haverbeck’s attorneys plan to take the case to the Higher Regional Court in Hamm – which will serve as the final opportunity to challenge the prison sentence.

As Hall wrote in The Friends of Voltaire: “I disapprove of what you say, but I will defend to the death your right to say it.”