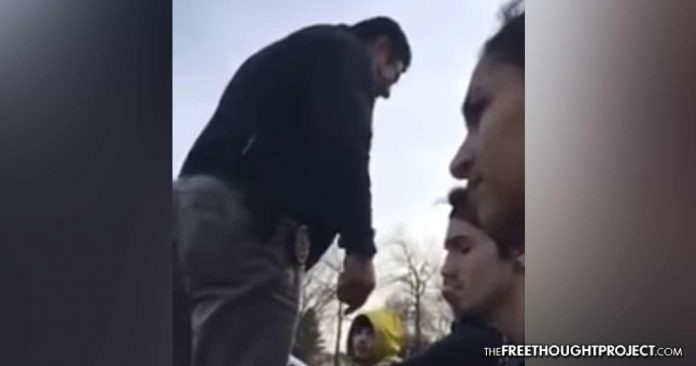 Chicago, IL — A Lake Villa police officer is in hot water after a group of teens secretly filmed him going off on a racist tirade. Lake Villa Police Department detective Esteban Gomez is now ‘YouTube Famous’ after telling a teen he is harassing him “because he’s white.”

Dezi Baczek, the teen who recorded the video, explained to the local news station that she was with friends at a local pawn shop, selling an item so her little brother could buy a book he wanted. When they came out of the shop, Gomez accosted them.

“I was yelled at to sit down,” Baczek told NBC 5. “I said, ‘What’s the reason?’ And he said sit down or I could turn around and be arrested, so I sat down at that point.”

After she sat down, Baczek pulled out her phone to record this belligerent peace officer.

In the video, Gomez is seen screaming at one of the teens who asked what he did wrong. He then starts to yell and says, “Wanna be hard with me? Be hard with me, go ahead. Think you’re a tough guy?”

In an attempt to intimidate the teens, Gomez starts to walk away and then turns around and says, “Who’s got the weed on them?”

The group reacts to his comment and Gomez turns around once again as he’s walking away and says “Did someone say fuck off?”

The group responds and says, “no,” just as Gomez points at two of the teens and says “You and you.”

As NBC 5 reports, police said the detective was conducting a theft investigation at the time and was questioning someone in the group. While the remaining members of the group sat on the curb, one teen can be heard in the video recording asking why he’s being detained.

“Because I’m a teen? Because I have baggy pants?” the teen asks, just before the cop lost his demeanor and turned back to the group.

“Because you’re white!” barked Gomez just before walking away again.

“I was speechless,” Baczek said. “Like I wasn’t comprehending what he actually said for a minute.”

After she saw the video, Baczek’s mom call the Lake Villa Police Department to file a complaint against Gomez.

“I was outraged. I was very upset,” Missy Maczek said. “I felt like we were being outcasted because we’re white, which is just unheard of.”

Lake Villa Police Chief Craig Somerville said Detective Esteban Gomez reported the group of teens was accompanying the suspect of a theft investigation at the pawn shop and one of the group members gave the officer a false name. That person was charged with obstructing police, according to NBC 5.

“When the subject questioned Gomez about his arrest, Gomez reacted by answering the teens [sic] inquiry with an inappropriate response,” Somerville said in a statement.

Somerville claimed that Gomez knew about the video and told him before it went viral. However, no statement was released until the video was picked up by local media.

“Det. Gomez admitted his words were poorly chosen and insensitive and he immediately regretted what he had said,” Somerville said. “The Lake Villa Police Department does not condone this type of behavior of its officers.”

Somerville claimed that Gomez was disciplined “for behavior unbecoming an officer.” However, no details of the alleged ‘discipline’ were released publicly and Gomez remains on active duty.

“I apologize to anyone who may have been offended by what is depicted on this video,” Somerville’s statement read. “This occurred on my watch and I assume full responsibility.”

If a non-law enforcement worker acted the way this detective did, while on the job, they would most assuredly be fired immediately. Instead, this man will get a pension and golden parachute at the taxpayer’s expense.