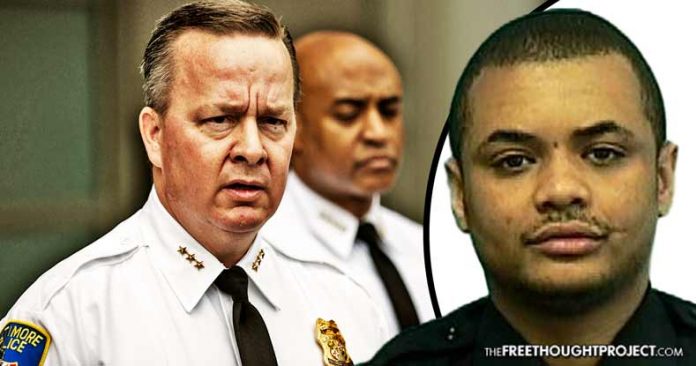 Baltimore, MD — In recent weeks, The Free Thought Project has been keeping a close eye on the developing case of a whistleblower with the Baltimore Police Department named Sean Suiter who was shot with his own gun the day before he was set to testify against corrupt cops within his own department.

Unlike most other shootings where police are the victims, no one has been arrested and there is no suspect to speak of. In fact, this is the only time in the history of Baltimore that a suspect in the shooting of a police officer has gone this long uncaptured.

With each day that passes, more suspicious details are uncovered which cast doubt on the official narrative that has been given by the police department since the shooting and brings suspicion upon the department itself.

Not only was Suiter set to testify in a massive corruptions case the day after his shooting but his partner was off work that day and the commissioner lied about this important detail in a press conference where he revealed the details of the case to the media. The man who filled in as Suiter’s partner on the day of his death is Facebook friends with one of the officers who is facing conviction.

On Wednesday, Congressman Elijah E. Cummings asked the director of the FBI to make the Suiter investigation one of their top priorities.

“I asked him that they use every resource available and do everything in their power to assist the Baltimore police in this investigation and make it a top priority,” Cummings said.

With the killer of a police officer on the loose for weeks and a population beginning to doubt the official word from the police department, you would think that they would be happy to bring in other agencies to help them wrap up the case, or at least prove that their hands are clean and that there is no cover-up.

However, as reported by WBAL-TV, the Baltimore Police department is not allowing the FBI to assist them in the investigation.

Department spokesman T.J. Smith said they will not be allowing any other agencies to interfere with their investigation.

The department’s refusal to allow another set of eyes on the case has even drawn criticism from the state’s governor, Larry Hogan, who told reporters that, “I have a lot of confidence in the Police Commissioner Kevin Davis in Baltimore, but at some point, the more eyes we have on this, the better.”

According to federal law, the FBI is allowed to take over cases from police departments when the death of an officer is involved but they must receive permission from the city’s police commissioner, and it does not look like that will be granted anytime soon.

This is the longest that a manhunt for the killer of a Baltimore police officer has gone on without an arrest or viable suspect. Previously, the record was held by a suspect who fled to Oklahoma over 50 years ago, before the introduction of big brother cameras and tracking technology, and he was caught in just five days. Cop killers do not get away with murder in Baltimore—but everyone else seems to. The homicide clearance rate for civilians is abysmally low, with barely a quarter of the city’s killings being solved.

Baltimore police have a reputation for using strong-arm mafioso tactics to intimidate fellow officers out of turning on the gang. As we reported back in 2014, Baltimore Detective Joe Crystal became a target of intimidation for his entire department after testifying against other officers in a misconduct case. Following his testimony, he received threats from other officers and even found a dead rat on his car one day.

For a history of how corrupt, violent, and deadly Baltimore cops are, take a look at our archives here.

John Vibes is an author and researcher who organizes a number of large events including the Free Your Mind Conference. He also has a publishing company where he offers a censorship free platform for both fiction and non-fiction writers. You can contact him and stay connected to his work at his Facebook page. John is currently battling cancer , and will be working to help others through his experience, if you wish to contribute to his treatments consider subscribing to his podcast to support .