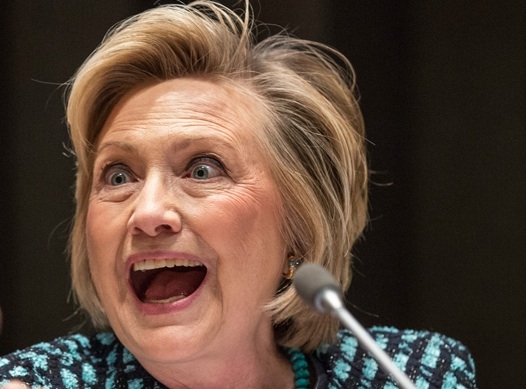 I’ve read on the AltMedia that Hillary Clinton had an outburst, in which the pathological liar said probably the only truthful thing she’s ever said:

“If that fucking bastard [Donald Trump] wins, we all hang from nooses.”

So I did a search and found the source of that quote: Bill Still, of The Still Report videos on YouTube.

A former newspaper editor and publisher. He has written for USA Today, The Saturday Evening Post, the Los Angeles Times Syndicate, OMNI magazine, and has also produced the syndicated radio program, Health News. He has written 22 books and two documentary videos.

According to Still, during last year’s presidential campaign at the Commander-In-Chief Forum on September 7, 2016, moderator Matt Lauer went “off script” and asked Hillary about her using an illegal, private email-server when she was secretary of state.

According to Bill Still’s source — an unnamed “NBC associate producer of the forum” — Hillary was so enraged that, after the forum, she went into a ballistic melt-down, screaming at her staff, including a racist rant at Donna Brazile, calling Brazile a “buffalo” and “janitor”. Brazile recently turned against Hillary — now we know why.

This is the NBC associate producer’s account of what happened:

“Hillary proceeded to pick up a full glass of water and throw it at the face of the assistant, and the screaming started.

She was in a full meltdown and no one on her staff dared speak with her — she went kind of manic and did not have any control over herself at that point. How these people work with this woman is amazing to me. She really didn’t seem to care who heard any of it.

You really had to see this to believe it. She came apart — literally unglued. She is the most foul-mouthed woman I’ve ever heard. And that voice at screech level — awful!

She screamed she’d get that fucking Lauer fired for this. Referring to Donald Trump, Clinton said, ‘If that fucking bastard wins, we all hang from nooses! Lauer’s finished, and if I lose, it’s all on your heads for screwing this up.’

Her dozen or more aides were visibly disturbed and tried to calm her down when she started shaking uncontrollably as she screamed to get an executive at Comcast, the parent company of NBC Universal, on the phone. Then two rather large aides grabbed her and helped her walk to her car.”

“Matt Lauer was massively criticized for the rest of the week on air by the Clinton campaign and the rest of the MSM as having conducted ‘an unfair and partisan attack on Clinton’. Calls were made to The New York Times, The Washington Post, Huffington Post and Twitter executives, with orders to crush Matt Lauer. One staffer on the Clinton campaign told the NBC staff that they all fear Clinton’s wrath and uncontrollable outbursts, and one described Hillary as ‘an egotistical psychopath’.

Since Hillary does not allow any staff to have cell phones when she is in their presence, no footage is available.

Interim DNC chairman Donna Brazile, the first black woman to hold the position, was singled out by Hillary during the rant. She screamed at Donna, ‘I’m so sick of your face! You stare at the wall like a brain-dead buffalo, while letting that fucking Lauer get away with this! What are you good for, really? Get the fuck to work, janitoring this mess, do I make myself clear?’

A female NBC executive said Donna Brazile looked at Mrs. Clinton and never flinched, which seemed to enrage Hillary all the more. The executive continued: ‘It was the most awful and terrible and racist display. Such a profane meltdown I have ever witnessed from anyone, and I will never forget it. That woman should never see the inside of the Oval Office, I can tell you that. She was unhinged and just continued to verbally abuse everyone. She was out of control.’”

Below is Bill Still’s video report: