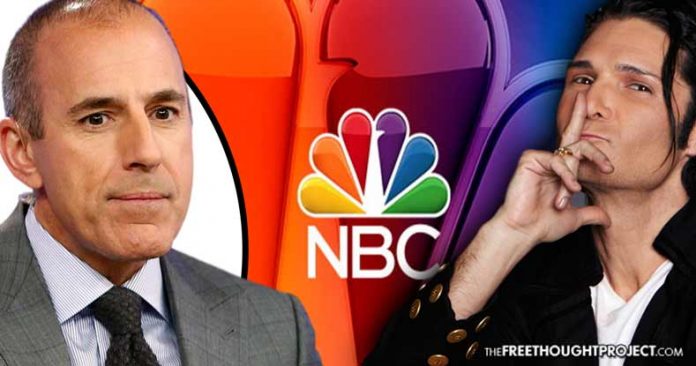 Unless you’ve been under a rock this week, you’ve probably noticed that NBC fired long-time host Matt Lauer after accusations of his sexual misconduct at the network surfaced.

“We received a detailed complaint from a colleague about inappropriate sexual behavior in the workplace by Matt Lauer. It represented, after serious review, a clear violation of our company’s standards. As a result, we’ve decided to terminate his employment,” read the memo by NBC News Chairman Andy Lack.

Lack went on to claim that this was the first complaint against Lauer. However, he immediately axed him on the spot, clearly demonstrating the severity of the situation and alluded to the fact there could be others saying they “were also presented with reason to believe this may not have been an isolated incident.”

Indeed, his creepy and predatory behavior was captured on video and displayed in front of the entire NBC staff—who took no punitive action.

In October 2006, during a commercial break of the Today’s show, one local affiliate failed to cut to commercial as Lauer got mic’d up for the next segment. The subsequent video captured Lauer sexually harassing his co-host. As his co-host Meredith Vieira leaned over in front of him to grab the scripts, you can clearly hear Lauer say, “Pretty sweater. Keep bending over like that. It’s a nice view.”

In yet another video, Vieira exposes Lauer for having a “bag of sex toys” in his office—live on air. Lauer quickly made up a story of a sex therapist giving everyone bags of sex toys, however, it is clearly a lie as both Vieira and the other host have no idea what he’s talking about.

Given the above videos and the statement from Lack, it is safe to assume that NBC knew of Lauer’s tendencies. Given their knowledge of these tendencies, the idea of Lauer interviewing victims of sexual assault becomes ominous and cruel. However, that is exactly what NBC did when they sat Corey Feldman down in front of him in October.

Last month, as TFTP reported, Feldman went on the Today Show and hinted to the now-fired host Matt Lauer, who his abuser was. However, like a true predator and serial abuser, Lauer attempted to victim shame Feldman and moved to discredit him. Feldman, however, is no pushover and has clearly dealt with people like this before.

That time when Matt Lauer grilled Corey Feldman.. Now we know why. #MattLauer

Having a sexual predator interview a child sex abuse victim is a horrifying notion. However, NBC apparently had no problem doing it, which may explain why they blocked the story that started this entire movement to expose the predators in Hollywood.

The catalyst to the downfall of Hollywood’s sexual monsters started with a massive and explosive months-long investigation into Harvey Weinstein’s alleged sexual assaults and predatory behavior by an NBC employee, Ronan Farrow.

As TFTP reported earlier this month, Farrow, who broke the Harvey Weinstein revelations, took direct aim at NBC. The investigative journalist unleashed a Twitter storm that intimated the network actively attempted to shut down his story on sex abuses by Harvey Weinstein – going so far as to threaten his NBC producer with losing his job.

“My reporting is only possible because of a group of brave journalists who fought for the story,” Farrow tweeted, praising the New Yorker magazine for fearlessly publishing his investigation of Weinstein’s alleged sexual abuse.

Now that Matt Lauer has fallen from grace, the reasoning behind NBC refusing to run the story becomes so much clearer. As the NY Post notes, in his comments, Farrow seemed to be referring to pressure put on news organizations by public personalities (like Weinstein) not to air or publish incendiary stories exposing them as really bad people. But maybe he knew more than he was letting on vis-à-vis rumors about Lauer whispered in the NBC corridors (and beyond — other news outlets, including Variety, were or still are reportedly working on their own Lauer stories).

We’ll probably never know if NBC knew about the Lauer allegations when it spiked Farrow’s Weinstein piece. But if you do the corporate math, it all adds up, notes the Post.

It also shows just how far this abuse goes and serves to shine a light on the depraved nature of these television personalities we are constantly told represent the American people. Well, no longer.