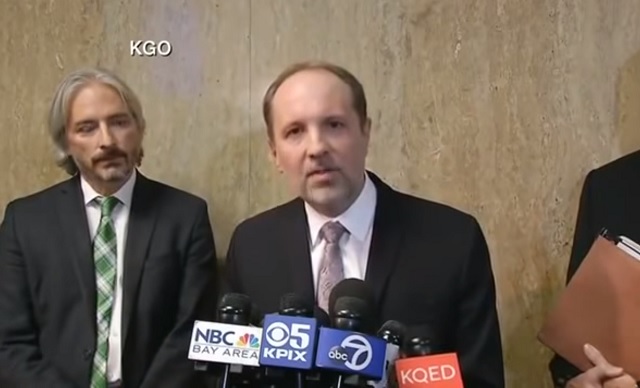 Public defense attorneys Francisco Ugarte and Matt Gonzalez lectured President Trump on Thursday after getting five-time deported illegal alien Jose Ines Garcia Zarate acquitted in the killing of Kate Steinle, claiming “nothing” about his immigration status “had any relevance as to what happened on July 4, 2015.”

“From day one this case was used to foment hate, to foment division, to foment the program of mass deportation,” public defense attorney Francisco Ugarte said shortly after the verdict. “It was used to catapult the presidency along that philosophy of hate of others. I believe today is a vindication for the rights of immigrants, and that today we have to reflect all of us on how we talked about this case in the beginning, and how this is a reflection and a reaction on the base of the racial dynamics of this case. Nothing about Garcia Zarate’s ethnicity, nothing about his immigration status, nothing about the fact that he was born in Mexico had any relevance as to what happened on July 4, 2015.”

Zarate was slated to be deported for a sixth time but the San Francisco sheriff’s department released him from jail despite a federal immigration request to detain him for deportation.

Before the shooting, Garcia Zarate had finished a federal prison sentence for illegal re-entry into the United States and was transferred in March 2015 to San Francisco’s jail to face a 20-year-old charge for selling marijuana.

The sheriff’s department released him a few days later after the district attorney dropped the marijuana charge, despite a U.S. request to detain him for deportation.

San Francisco is a “sanctuary city” for illegal alien criminals.

The fact is if this killer had stayed in Mexico then Steinle would still be alive today. Ugarte’s claims are comical considering his partner Matt Gonzalez said in court that Zarate’s “second-grade education” and inability to speak English made it so he couldn’t understand police during his interrogation, and that’s the only reason he changed his story repeatedly:

During the trial, jurors watched video from Garcia Zarate’s four-hour police interrogation, in which he offered varying statements about his actions on the pier. At one point he said he had aimed at a “sea animal,” and at another point, he said the gun had been under a rag that lay on the ground near the waterfront, and that it fired when he stepped on it.

Gonzalez said it was clear in the video that Garcia Zarate — who has spent much of his adult life behind bars, was living on the street before the shooting, and has a second-grade education — did not fully understand what the officers were asking him through an officer’s Spanish translation.

Shortly after the verdict was read, Gonzalez also seized on the opportunity to lecture President Trump.

“There are a number of people who have commented on this case in the past few years: the Attorney General of the United States, the President and the Vice President of the United States, let me just remind them that they are themselves under investigation by a special prosecutor in Washington D.C., and they may themselves soon avail themselves of the presumption of innocence and beyond a reasonable doubt standard,” Gonzalez said. “I would ask them to reflect on that before they comment or disparage the result in this case.”

These are political hacks bragging about helping a Mexican illegal alien get off despite killing an innocent American citizen.

Francisco Ugarte and Matt Gonzalez should be deported along with Jose Ines Garcia Zarate.