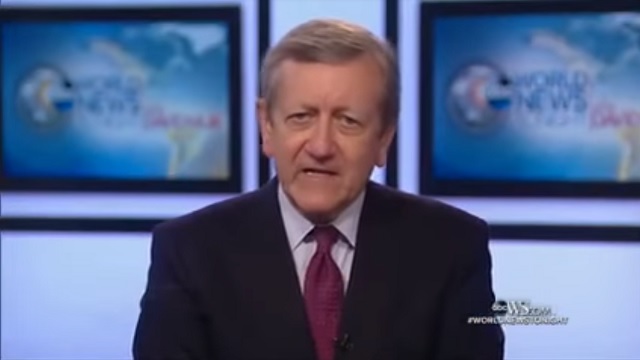 Ross initially reported at 11:00 a.m. EST that a “confidant” told him Michael Flynn is “prepared to testify that President Trump, as a candidate, Donald Trump, ordered him — directed him to make contact with the Russians which contradicts all that Donald Trump has said to this point.”

The news went straight to the top of Drudge report and nearly every news site and induced a sharp market sell-off:

Ross issued this embarrassing “clarification” over seven and a half hours later at 6:34 p.m. EST:

Ross said: “And David, a clarification tonight on something one of Flynn’s confidante’s told us and we reported earlier today. He said the President asked Flynn to contact Russia during the campaign. He’s now clarifying that statement, saying, according to Flynn, candidate Trump asked him during the campaign to find ways to repair relations with Russia and other hot spots and then after the election, the President-elect asked him — and told him to contact Russia on other issues, including working together to fight ISIS, David.”

Ross did not “clarify” his nonsense claim that Trump directing Flynn “to make contact with the Russians” supposedly “contradicts all that Donald Trump has said to this point.”

On Twitter, ABC News released a similar “clarification,” only to delete it hours later and change it to a “correction.”

CORRECTION of ABC News Special Report: Flynn prepared to testify that President-elect Donald Trump directed him to make contact with the Russians *during the transition* — initially as a way to work together to fight ISIS in Syria, confidant now says. https://t.co/ewrkVZTu2K pic.twitter.com/URLiHf3uSm

This is not the first time Ross reported fake news.

“Ross gained infamous notoriety for jumping to conclusions that a ‘Jim Holmes’ who belonged to ‘the Colorado Tea Party site’ was the man who killed 12 and injured 70 people,” NewsBusters reports. “It turned out that this was actual fake news as the shooter was a different person named James Holmes who had nothing to do with the conservative organization.”

No doubt Facebook and Google will now demote ABC News in their search results and suppress their content on their platforms in the interest of “promoting honest journalism” and fighting “fake news.”

Incidentally, the liberal “fact checkers” at Politifact and Snopes have so far ignored the story.