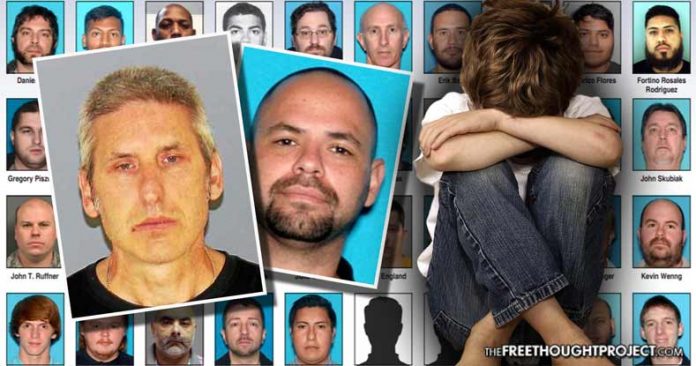 Trenton, NJ — Scores of people were arrested this week in a multi-agency sting that targeted child predators. “Operation Safety Net” was led by the New Jersey Regional Internet Crimes Against Children Task Force and took down 79 predators, some of whom were attempting to purchase children as young as 4-years-old for sex.

Setting this sting apart from the multiple other stings throughout the country is the fact that it concentrated solely on children instead of simply busting willing adults paying for consensual sex.

As TFTP has reported in the past, arresting consenting adults engaging in sex for money causes far more problems than it prevents by pushing the sex trade into the criminal market and actually fostering illegal human trafficking. Concentrating law enforcement efforts on stopping those who go after children is a much more effective and moral crusade than busting consenting adults for sex.

He was arrested at the Los Angeles airport when he showed up to meet the girls, Porrino’s office said.

Castillo faces federal charges of transportation of a minor with intent to engage in criminal sexual activity and production of child pornography, as well as state charges that include child trafficking, according to the report.

Another disgusting human being to be swept up in the sting was Joseph Donohew, 26, of Brownsburg, Indiana, who tried to offer an undercover detective money to have sex with a 9-year-old girl. He had bought the girl a nightgown from a Disney movie, authorities said. He was charged in Indiana with attempted child molestation, according to NBC 10.

To illustrate just how wide-spread the problem is, law enforcement arrested at least one person in every single county in the state, as well as some from out of state.

It wasn’t just basement dwellers and recluses who were busted either. Included in the 79 arrests was a police officer from Trenton—Paul Marinelli, a 20 year veteran of the department—a teacher, a postal worker, and multiple successful IT professionals.

To aid them in their bust, police used the only electronics sniffing dog in the country to help sniff out USB drives disguised as Lego bricks and other small items like cufflinks.

“The men we arrested lurked in the shadows of the internet and social media, looking for opportunities to sexually assault young children or to view such unspeakable assaults by sharing child pornography,” Porrino said in the statement. “We set up a wide safety net in this operation to snare these alleged predators and to protect children, which remains our highest priority.”

What this sting illustrates is that the problem of child sex abuse exists in all walks of life, including those tasked with stopping it. TFTP applauds the men and women who devoted the last nine months to Operation Safety Net and their work should serve as an example to the countless other departments who spend far more money and time going after people for possessing a plant or for their illegal window tint.

When there is clearly a child predator in every county in New Jersey, wasting taxpayer dollars to kick in doors in the middle of the night to arrest people for possessing a plant becomes one of the most asinine tasks a police officer can do. If these resources that were applied to the drug war were shifted over to stopping the exploitation of children, rest assured, these predators’ days would be numbered.