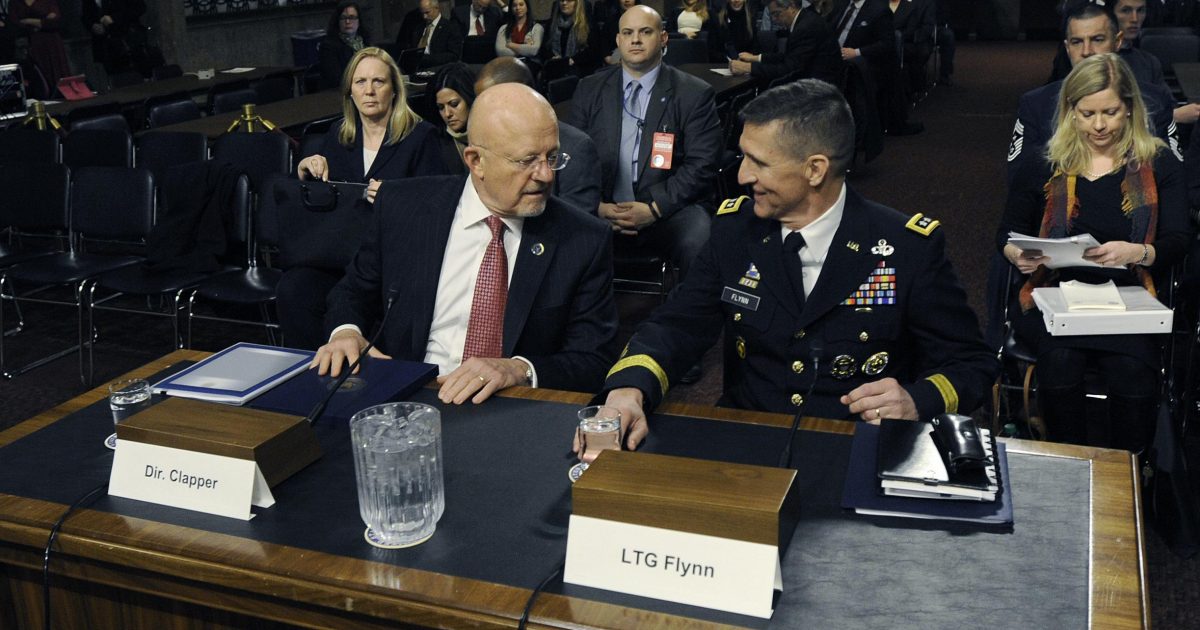 We already knew the Flynn didn’t tell the truth to Vice President Pence.  That came out when he resigned.  Apparently, the same things were done to the FBI regarding talks he had with the Russian ambassador and Flynn is going along with it for the sake of himself and his family.

Flynn was wrong to have concealed the conversation.  However, was this a real national security measure?  I’m not asking that with the intent to cover for his actions.  If he lied under oath, then sure, deal with him on that, but I’m asking with regard to what we were led to believe about Russian collusion.  This doesn’t have anything to do with election meddling.

“The charging document states that Flynn made a false statement to the FBI when he stated that in December 2016 he did not ask Kislyak “to refrain from escalating the situation in response to sanctions that the United States had imposed against Russia that same day; and Flynn did not recall the Russian ambassador subsequently telling him that Russia had chosen to moderate its response to those sanctions as a result of his request,” reported CNN.

Now, CNN is known as the absolute name you cannot trust in the news media, but at least that part of the report is correct.  However, ABC… that’s a different story.

Here’s ABC’s Brian Ross tweeting, “Michael Flynn promised “full cooperation to the Mueller team” and is prepared to testify that as a candidate, Donald Trump “directed him to make contact with the Russians.”

Liberation Information then reported that Ross’ tweet was fake news and he attempted to cover for the tweet.

Ross said: “And David, a clarification tonight on something one of Flynn’s confidante’s told us and we reported earlier today. He said the President asked Flynn to contact Russia during the campaign. He’s now clarifying that statement, saying, according to Flynn, candidate Trump asked him during the campaign to find ways to repair relations with Russia and other hot spots and then after the election, the President-elect asked him — and told him to contact Russia on other issues, including working together to fight ISIS, David.”

Ross did not “clarify” his nonsense claim that Trump directing Flynn “to make contact with the Russians” supposedly “contradicts all that Donald Trump has said to this point.”

The damage was done by then.  As IL added:

The news went straight to the top of Drudge report and nearly every news site and induced a sharp market sell-off:

ABC later had to “clarify,” which was really correct what Ross tweeted.

“Flynn prepared to testify that President-elect Donald Trump directed him to make contact with the Russians *during the transition* — initially as a way to work together to fight ISIS in Syria, confidant now,” they tweeted.

However, when it comes to openly violating the rights of the people that are supposed to be protected under our Constitution, Obama’s former CIA head, James Clapper, committed perjury on national television and I have to ask where the FBI is at in this matter?

During testimony in 2013 in front of a congressional inquiry, Clapper was asked by Senator Ron Wyden if the NSA was collecting “any type of data at all on millions or hundreds of millions of Americans.”

Senator Wyden asked “It does not?”

Director Clapper responded “Not wittingly. There are cases where they could inadvertently perhaps collect, but not wittingly.”

This was proven to be completely fraudulent three months later when whistleblower Edward Snowden revealed that the NSA was deliberately collecting tens of millions of Americans’ phone call records as well as browsing histories, chat logs, email usage, as well as their physical locations.

Clapper would have had a level of security clearance to know that this was taking place. He committed clear perjury by lying under oath, yet faced no consequences at all.

The double standard when it comes to lying doesn’t even seem to phase the FBI.  Why has Clapper not been arrested and charged with a crime?  Because he’s part of the establishment, plain and simple.

However, understand that there is far more going on here with Flynn in the way of exposing a huge scandal that many people can’t imagine and a lot of it isn’t even being reported in the news right now, but has been reported over the past 4 or 5 years in bits and pieces.  More to come on that very soon.