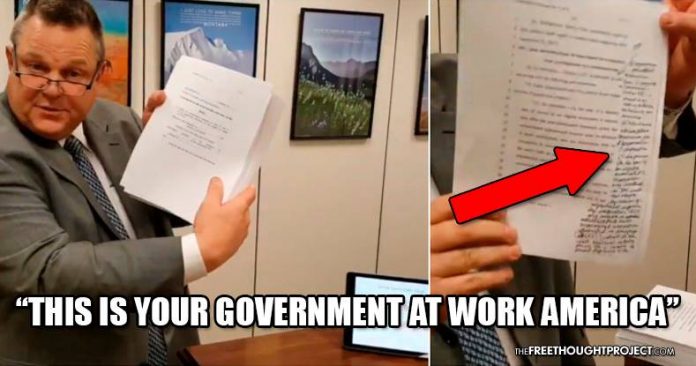 Both Democrats and Republicans in the Senate came together to pass a massive tax bill early Saturday morning, and one senator called out the hypocrisy on Twitter, noting that he was handed a nearly 500-page bill just a few hours before he was expected to vote on it—and it included pages of illegible hand-scribbled notes.

“Happy Holidays, everybody! It’s the night we’re going to be voting on the tax bill. I just got the tax bill 25 minutes ago.  This is the tax bill. See how thick it is. This is what it looks like. Oh, no, let’s look at the bill—this is what it really looks like,” Sen. Jon Tester said, as he held up a page filled with messy, handwritten notes. “I want you to take a look at this, folks. This is your government at work.Here’s the bill as it’s written. Here’s the modifications that are in it. I can read one word.”

I was just handed a 479-page tax bill a few hours before the vote. One page literally has hand scribbled policy changes on it that can’t be read. This is Washington, D.C. at its worst. Montanans deserve so much better. pic.twitter.com/q6lTpXoXS0

The Tax Reconciliation Act was passed by a vote of 51-49. Sen. Tester, a Democrat from Montana, published the video on Twitter Friday evening, and it has since been retweeted more than 133,000 times.

“This is unbelievable,” Tester said. “We’re doing massive tax reform on an absolute and credible timeline. This is going to affect everyone in this country. It’s going to shift money from middle-class families to the rich. It’s amazing, and we’ve been given this 25 minutes ago, and we’re supposed to vote on it in a couple of hours.”

Sen. Dick Durbin, a Democrat from Illinois, also criticized the policy changes in the form of handwritten notes carelessly scribbled along the side of the bill’s text. “Trying to review the #GOPTaxScam but they are making hand-written changes to brand new text as we speak—can anyone else read this?” Durbin asked on Twitter.

Trying to review the #GOPTaxScam but they are making hand-written changes to brand new text as we speak – can anyone else read this? pic.twitter.com/JX8v1v4gyi

Sen. Claire McCaskill, a Democrat from Missouri, published a Tweet on Friday afternoon, claiming that she and her colleagues received a list of amendments to be included in the bill that came from lobbyists, and not directly from the Republicans who were given credit for writing them.

“This is so bad. We have just gotten list of amendments to be included in bill NOT from our R colleagues, but from lobbyists downtown,” McCaskill wrote. “None of us have seen this list, but lobbyists have it. Need I say more? Disgusting. And we probably will not even be given time to read them.”

This is so bad. We have just gotten list of amendments to be included in bill NOT from our R colleagues, but from lobbyists downtown. None of us have seen this list, but lobbyists have it. Need I say more? Disgusting. And we probably will not even be given time to read them. pic.twitter.com/Mn0i56JeZg

While Democrats seemed to be in the majority when it came to criticizing the massive bill, every elected official—no matter their party affiliation—should be held accountable for their vote.

In the case of the Tax Reconciliation Act, the senators seemed to be expected to read nearly 500 pages in just a few hours, while also deciphering scribbled handwriting. However, it should be noted that this is not a partisan practice. From the Patriot Act, to the Affordable Care Act, there have been countless occasions in which Democrats and Republicans have worked together to endanger the American people by voting in favor of massive pieces of legislation they have not read.

It's 2 a.m. Saturday morning & the U.S. Senate just passed a hastily-written bill that adds $1.5 trillion to the debt. Washington dysfunction has hit a new low and Montana families and small businesses deserve better than this.