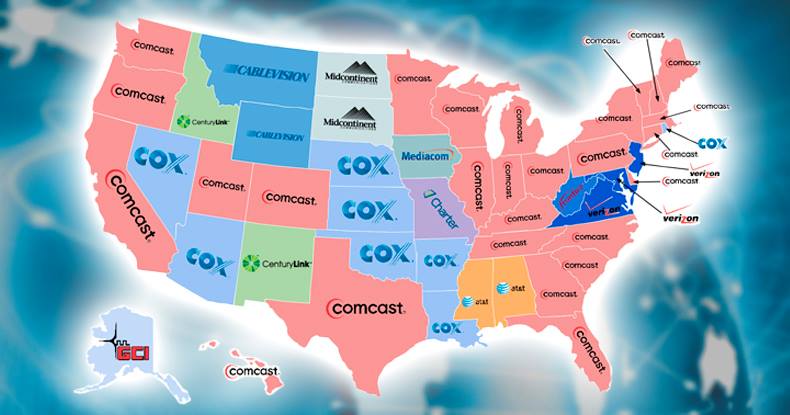 There is a massive debate going on in America right now when it comes to the notion of repealing Net Neutrality. Depending on which side of the political aisle you get your information from likely depends on how you feel about the issue. It is important to note, however, that both sides are missing key points to what this all means and why we are fighting over it.

It is agreed upon by both the left and the right that Net Neutrality was passed in 2015. And that’s where the agreement stops.

It is no secret that ISPs began hiking prices and throttling service. However, the major Internet Service Providers like Verizon, Xfinity and Comcast all say they support net neutrality. So, claiming it keeps them in check is not true.

The ISPs only want to remove the part of the current Net Neutrality which forces all the infrastructure built by these companies to be policed under a law originally made for phone companies called “Title II.”

Title II, created for the telecom industry in 1934, forces private companies to be classified as “common carriers.” A common carrier is a company that transports things from one place to another—like the post office. The government has stricter rules for common carriers that include regulating how much they can charge people and whether they can treat customers differently.

If we want to see how that would pan out for the future of the internet and it’s ever-changing infrastructure, we need only look at the failing US postal system, its crumbling foundation, and its multi-billion dollar loses it passes on to the taxpayers every year.

We don’t need the Flint, Mich. water equivalent of internet access. Net Neutrality will create this.

Designating ISPs as common carriers would essentially end investment and innovation into the internet.

We are told we need Net Neutrality because it is intended to prevent ISPs from offering preferential treatment to certain content over their lines. The rules prevent, for instance, AT&T from charging a fee to companies that want to stream high-definition videos to people, as the NY Times notes.

While this may seem like a reasonable idea on the surface, the reality is that the internet is not some unlimited free resource. Companies like AT&T have to limit each customer’s bandwidth as it is a shared resource among all their customers. Do not consider the aforementioned statement as an endorsement of AT&T as it is a simple truth.

Bandwidth is a limited resource. When companies like Netflix account for nearly 37% of all internet traffic, ISPs are forced to make decisions on how to deliver the other 63% of the entire internet who has to compete with a single website. Naturally, because Netflix is so popular, people become uneasy about hearing ISPs charging them a premium for its access.

However, it is a reality. If this premium is not charged to Netflix, then non-Netflix users end up subsidizing the consumption of Netflix users. Where’s the outcry now?

As Chris Calton writes, the reality of the scarcity of internet bandwidth cannot be legislated away. If Net Neutrality were to become policy, internet service providers will have to find alternative solutions for allocating bandwidth in an industry now contending with a disrupted price mechanism. Most likely, this would mean charging consumers higher prices for faster speeds than would otherwise be necessary, or placing data caps on home internet, as some service providers have already started to do.

Now, for the right’s take on the issue.

Laws across the country essentially outlaw competition with the ISP monopolies. These barriers to market entry—created by the state at the behest of ISPs who are giving them millions to do it—is why this map below of who controls most of the internet in each state looks the way it does. Through the creation and use of various laws, the state sets out to prop up major ISPs because they lobby them to do so. This happens so often that there are actually terms for these government-created barriers ranging from red tape to making it outright illegal to compete with the monopolies.

These barriers were covered in an analysis by Craig Settles, a broadband consultant who works with cities to create municipal networks. There are three different “categories” of state law banning broadband competition. There are “If-Then” laws, which have some requirements for local networks such as a voter referendum or a requirement to give telecom companies the option to build the network themselves, rather than restrictions (some are easier to meet than others). Then there are “Minefield” laws, which are written confusingly so as to invite lawsuits from incumbent ISPs, financial burdens on starting new a network, or other various restrictions. Finally, you’ve got the outright bans.

“I look at all of these laws as subverting the democratic process. In all cases, they’re nullifying or subverting the ability for local communities to make their own decisions,” Settles said. “It’s also a bastardization of the free market process that incumbents say the laws are in defense of. In reality, if 10,000 people in a community decide their services are crap, then they can decide, as a market, to take their money and find or create another provider.”

The reality of Net Neutrality is that it is an attempt at putting a government-funded band-aid on a government-created wound and its proponents have no problem admitting to it.

For those that aren’t familiar, Free Press is the George Soros-funded net neutrality group who essentially wrote the “Open Internet Order” (OIO) regulating the Internet, passed by the FCC in 2015. Free Press is even mentioned 46 times in the actual legislation.

Free Press advocates for the theft of the infrastructure that was funded by private companies to make the internet a public resource or a right.

“What we want to have in the US and in every society is an Internet that is not private property, but a public utility. We want an Internet where you don’t have to have a password and that you don’t pay a penny to use. It is your right to use the Internet,” Robert McChesney, one of the founders of Free Press, stated.

While “free stuff” is an easy sell to those who don’t understand economics, the reality is it doesn’t exist. Consumers will most certainly be hit the hardest and the ISPs and the state will win. One need only look at how the insurance companies lobbied for Obamacare and the massive windfall they reaped as a result, along with the skyrocketing prices of healthcare for the rest of the country with dwindling coverage, to get a glimpse of where this legislation will lead.

If the socialist idea of stealing the product of the free market for use in the state doesn’t deter you from supporting it, consider the dystopian and outright unsecured nature of the government owning and operating the internet.

Not only do public utilities fail to ever innovate, but they are also notoriously horrible at protecting your privacy.

As FEE points out, when the Office of Personnel Management held the personal data of 21.5 million people, it was an easy target for hackers seeking access. The list of government agencies compromised by hackers continues to grow. Imagine if everyone’s personal information, including emails, browser history, and the data stored on “cookies” on computers was stored in one giant government entity that runs the Internet.

There are two clear paths the Internet might take, depending on which sides wins this battle over having a truly free, private Internet or one controlled by the government as a public utility. While the free market always supports innovation and consumers’ choices, government control has only led to corruption and inefficiency in all entities it controls.

Supporters have communicated exactly what they want. There can be no confusion about what the net neutrality agenda is all about: supporters of net neutrality demonize Internet service providers in their populist arguments for government control. But if they win their dream, consumers will be the real losers in this battle over Internet control.

If we really want to stop these mega-ISPs from controlling the web, granting them a government monopoly on the information exchange is the last thing we need to do. To truly have a free and open internet, we need to get government out of it altogether. Luckily, as TFTP has previously reported, this is already happening and Internet 2.0 could be a reality as early as 2020.