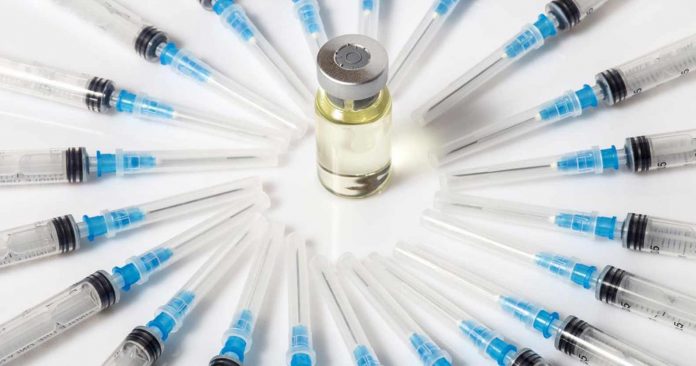 The evidence establishing a potential link between aluminum in vaccines and autism has become so prevalent that it is now being reported in the mainstream corporate media. The most recent studyconducted by Keele University, published in the Journal of Trace Elements in Medicine and Biology, provides the strongest indication yet that aluminum is a cause of Autism Spectrum Disorder (ASD).

The new research found that autistic children have up to 10 times more aluminum in their brains than what is considered safe in adults. The study notes that the aluminum is crossing the blood-brain membrane and accumulating in cells involved in maintaining a constant internal environment such as temperature.

According to the Centers for Disease Control and Prevention, Aluminum is present in U.S. childhood vaccines that prevent hepatitis A, hepatitis B, diphtheria-tetanus-pertussis (DTaP, Tdap), Haemophilus influenzae type b (Hib), human papillomavirus (HPV) and pneumococcus infection.

This aluminum is added, according to the CDC, “ to increase the body’s immune response to the vaccine.”

While the CDC considers the addition of aluminum to vaccines to be safe, this study and several others before it refutes that claim. Even outside of this study, it has been well established that Aluminum is a known neurotoxin and is highly biologically reactive and uniquely equipped to do damage to essential cellular (neuronal) biochemistry.

It is no question that the subject of vaccines is profoundly controversial. On both sides of the argument exists truth and lies that can hinder the ability of some to make rational decisions.

While we have everyone from attorneys to biologists, to political scientists who write for the Free Thought Project, none of us are doctors, so we do not make recommendations about what you and your family should do in regards to vaccination. It is important to note, however, that this information is almost always absent from the mainstream media which is why we find it necessary to report. This time, however, it is different as the latest study is apparently so compelling that it is getting exposure.

As the Daily Mail reports, study author Professor Chris Exley from Keele University, said: “Perhaps we now have the link between vaccination and autism spectrum disorder (ASD), the link being the inclusion of an aluminum adjuvant in the vaccine.”

The study examined physical brain tissue from deceased donors who died with the diagnosis of ASD. Researchers found that the aluminum content in the brain tissue was “extraordinarily high;” some of the highest values ever measured in human brain tissue.

Why for example, would one of the four major brain lobes of a 15-year-old boy with autism be 8.74 (11.59) micrograms/g dry weight – a value which is at least 10 times higher than might be considered as acceptable for an adult never mind a child?

Yet, while the aluminium content of each of the five brains was shockingly high it was the location of the aluminium in the brain tissue which served as the standout observation.
The majority of aluminium was identified in non-neuronal cells, which are involved in maintaining a constant internal environment.

The fact that the majority of aluminium found in brain tissues in ASD was within cells and associated with tissues that maintain the body’s internal environment is, at least for now, unique to ASD and may begin to explain why young adolescents had so much aluminium in their brains.

While a single study should never be used to draw conclusions, this is the third study just this year to publish similar findings in prestigious journals. Exley also published a study in March in which aluminum in the brain was linked to Alzheimer’s Disease.

A peer-reviewed study published online in September and set to be published in this month’s volume of the Journal of Inorganic Biochemistry, conducted by scientists at the University of British Columbia, has established a similar link.

The findings of that study show the specific reactions aluminum administered through vaccines have in the brain that are homologous with biomarkers of autism.

The study’s title says it all.

But that is not all. As J.B. Handley, Jr., co-founder of Generation Rescue, points out, this study corroborates yet another previous study conducted in France by Université Paris Est Créteil (UPEC), published in the journal Toxicology earlier this year which came to a similar conclusion. According to that study, the authors disputed the reasoning the FDA and CDC use to claim that it is safe to inject developing children with known neurotoxins.

“As a possible consequence, comparing vaccine adjuvant exposure to other non-relevant aluminum exposures, e.g. soluble aluminum and other routes of exposure, may not represent valid approaches.”

The French study found that as small doses of aluminum are injected over time, like during childhood vaccinations, it was more likely to end up in the brain. They concluded with the following warning:

“In the context of massive development of vaccine-based strategies worldwide, the present study may suggest that aluminum adjuvant toxicokinetics and safety require reevaluation.”

While the CDC claims the aluminum injected into children stays at the injection sites, the previous study actually showed the opposite and it appears from Exley’s research, they were right.

Collectively, these findings refute the notion that adjuvant nanoparticles remain localized and act through a “depot effect”. On the contrary, Al derived from vaccine formulations can cross the blood-brain and blood-cerebrospinal fluid barriers and incite immunoinflammatory responses in neural tissues.

While the vitriolic crowd, who refers to everyone who seeks to make vaccines safer as rabid anti-vaxxers, will undoubtedly attempt to shout this study down, it is important that everyone heed the warning from the scientists who conducted it. They are not calling for the end of vaccinations, only issuing a warning about the potentially dangerous effects of injection aluminum.

Perhaps there is something within the genetic make-up of specific individuals which predisposes them to accumulate and retain aluminium in their brain, as is similarly suggested for individuals with familial Alzheimer’s disease. The new evidence strongly suggests that aluminium is entering the brain in ASD via pro-inflammatory cells which have become loaded up with aluminium in the blood and/or lymph, much as has been demonstrated for monocytes at injection sites for vaccines including aluminium adjuvants. Perhaps we now have the putative link between vaccination and ASD, the link being the inclusion of an aluminum adjuvant in the vaccine.

Make no mistake, now that this study is getting coverage in the mainstream media, Big Pharma’s Praetorian Guard will likely try to smear Exley by launching a subsequent witch hunt. However, as the data continue to accumulate, this potential link will be harder to sweep under the rug.