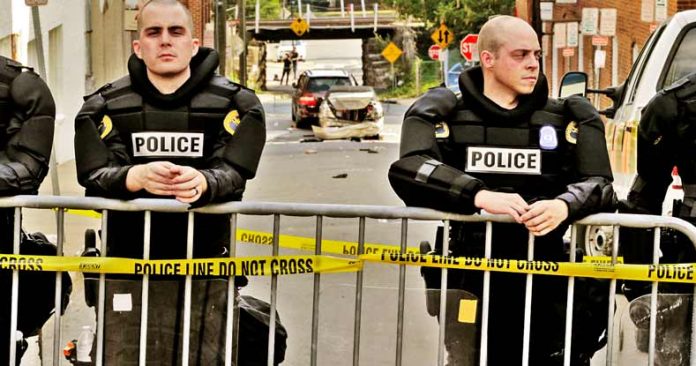 Charlottesville, VA — There is no shortage of violent footage of clashes between neo-nazi white supremacists and counter-protesters from the Charlottesville Unite the Right Rally back in August. Multiple violent battles raged on for several minutes as blood spilled onto the streets of this college town. Only several feet away were police officers — who did nothing to stop it.

A damning report, conducted and commissioned by the city of Charlottesville on the mistakes, missteps, and failures of local police, now proves officers were told to abandon their posts and stand down, leading to deadly and disastrous results.

One such post that was deliberately abandoned led to the death of Heather Heyer after a white supremacist drove through the once guarded barricade and mowed down peaceful protesters in his car.

As the Richmond Times-Dispatch reports:

A police officer radioed for help as angry protesters swarmed around her: “They are pushing the crowd my way and I have nobody here to help me.”

Tammy Shiflett, who had just returned to active duty as an elementary school resource officer after two months recovering from a shoulder surgery, was the only person assigned to block traffic at the intersection where a deadly car attack began in Charlottesville on Aug. 12.

Instead of sending reinforcements, a superior instructed her to abandon her post and move the car that had been positioned in the intersection, leaving a wooden sawhorse as the only barrier keeping vehicles out of the area. Roughly an hour and a half later, a white nationalist drove his car down that very street, striking a crowd of counterprotesters and killing 32-year-old activist Heather Heyer.

Shiflett was one of many officers told to stand down during the chaos on that fateful Saturday back in August which led to wholesale public beatings and even guns being fired in public as cops did nothing. As to why the police were told stand down, according to the report, it’s was because police were more concerned with protecting their own than doing their jobs.

“Supervisors devised a poorly-conceived plan that under-equipped and misaligned hundreds of officers,” the report says. “Execution of that plan elevated officer safety over public safety.”

Not only did superiors tell the officers to stand down but, according to the report, they also tried to cover that fact up by deleting evidence of it.

The review, led by Tim Heaphy, a former federal prosecutor who now works for Hunton & Williams, according to the Richmond Times-Dispatch, also found:

As the report notes, police—on all fronts—were told to take a passive stance and simply stood by as violence broke out in front of them. As TFTP reported at the time, this led to cops doing absolutely nothing as a white supremacist fired a round into the crowd right in front of them.

“Hey, nigger!” the crazed racist says right before he fires his gun. Whether he was firing at a specific person or simply trying to terrorize the crowd was unclear. He appeared to be firing in the direction of Corey Long who was in an altercation with another group of people and had made a makeshift flamethrower with an aerosol can. However, what was entirely clear was the reaction from police—there wasn’t one.

“We all heard it and ran — I know damn well they heard it,” said Rosia Parker, a community activist in Charlottesville when speaking about the police. “They never moved.”

The man who fired the shot was never arrested that day. In fact, not until two weeks later did police act. Richard W. Preston, 52, was arrested and charged on August 25 with discharging a firearm within 1,000 feet of a school during the so-called “Unite The Right” rally.

WATCH: Man fired at another person in Charlottesville on Aug. 12. We handed 📹 to LE agencies. The man has been arrested & charged w a crime. pic.twitter.com/0vrXq4zNC0

What is notable about this report is the fact that despite multiple independent reports of police being told to stand down, that notion was widely regarded by the media as a conspiracy theory. Now, however, the dismissive tactics by the corporate media have proven to be false and those who were paying attention are once again vindicated.