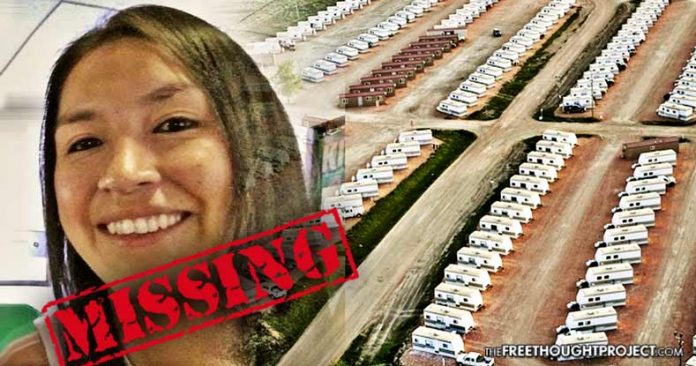 New Town, ND – The recent disappearance of a 32-year-old mother has shed new light on the growing problem of violence against women that live near the booming oil fields of North Dakota. Over a month ago, Olivia Lone Bear went missing from Fort Berthold Reservation and has not been heard from since.

In a recent interview, lawyer Mary Kathryn Nagle, who is helping the family with the investigation, pointed out that violence against women in this particular area has been steadily increasing since the oil companies came to town.

“Numerous leaders both at the state and federal level have now noticed that North Dakota—some of the towns in North Dakota within the Bakken boom and some within the Fort Berthold reservation, where Olivia is from, now some have some of the highest rates of sex trafficking in the United States,” she added.

Pop up trailer cities where tens of thousands of oil workers come to live have become known locally as “man camps.” These camps are filled with workers who have been shipped in from all over the country, and while the majority of them are just trying to take any job they can get in a tough economy, there is a very dangerous criminal element that goes unchecked in and around these camps.

According to the Boston Globe, there are over 35 corporations extracting oil and “man camps” that stretch for miles just on the Fort Berthold reservation alone. A 2013 report in the Bismark Tribune showed rates of crime increasing across the board in the state, with Attorney General Wayne Stenehjem placing the blame directly on the growing oil industry and the camps that come along with it. More recent numbers show that the state’s crime rate increased by nearly 10% in 2015 and has stayed at that level, despite a slight increase of less than a percentage point in 2016.

North Dakota U.S. Attorney Tim Purdon told the AP that, “Our police and prosecutors are going to have to adapt to keep pace. We have organized criminal gangs selling drugs, sex trafficking, and out-of-state flim-flam men coming in. And the cases have become more and more complicated.”

Former Rosebud Sioux Tribe Police Chief Grace Her Many Horses warned about these camps in a 2014 interview, saying that, “This tribal police department isn’t equipped to handle what’s going to happen out there when the Man Camp arrives. The infrastructure of the towns on this Indian reservation will be forced to expand then months later it will collapse onto itself. Because I’ve witnessed it doing just that… what I am saying up there in Newtown, ND. It’s going to be really scary. Realistically speaking, we’re going to need to setup a substation for the area nearest to the Man Camp, and we got have people on call 24 hours a day there too. I don’t know how we are going to deal with that just yet. We are overwhelmed as is stands right now. Once the Man Camp moves in…”

She also revealed that young children have become targets of the sex traffickers and that local police commonly interact with registered sex offenders.

“Sexual assaults on the male population has increased by 75% in that area. One of the things we ran into while working up there was a 15-year-old boy had gone missing. He was found in one of the Man Camps with one of the oil workers. They were passing him around from trailer to trailer….We found a crying, naked, four-year-old girl running down one of the roads right outside of the Man Camp. She had been sexually assaulted…We found thirteen sex offenders in one Man Camp and that Man Camp is found directly behind the tribal casino,” she said.

Tribal police departments are also prevented from having jurisdiction over the non-tribal crime, which has presented a major roadblock in solving these cases, especially since the issue does not seem to be a priority to non-tribal law enforcement. In 2015, the FBI opened a fully staffed office in the area, but in the two years that they have been around there has been no improvement, and now there is another missing person with no major leads from the agency.