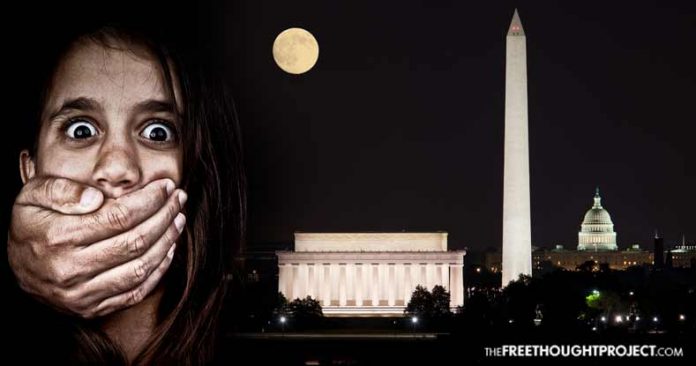 It is no longer a secret that throughout all levels of the Hollywood establishment there is rampant sexual abuse. However, this massive ousting of pedophiles and sex abusers is leading to a place in which some of society’s worst abusers make a living off your tax dollars—Washington D.C.

In a bombshell interview with Disobedient Media, Greg Bucceroni, a survivor of sex trafficking, described his experiences in an alleged child sex ring in the late 1970’s and early 1980’s that primarily targeted troubled young boys on the East Coast. The network was said to be comprised of known human traffickers, abusers and producers of child pornography with ties to organized crime who openly associated with prominent political figures, including some who have been accused of indiscretions in the past, according to DM.

For those who don’t remember, Bucceroni is no stranger to exposing elite pedophiles as he came forward in 2012 with major allegations linking Jerry Sandusky to a massive pedophile ring tied to former Poly Prep football coach Phil Foglietta.

The pedophile ring operated under the cover of being a charitable organization that helped at-risk youths. Only this alleged pedophile ring preyed on them instead of helped them.

“(Between) 1977-1980 I was a child prostitute associated with a tri-state (NYC-NJ-PA) pedophile ring. (During the) summer of 1979 I was brought to the State College area by Ed Savitz for the purpose of child prostitution with Jerry Sandusky at a Second Mile fundraiser,” Bucceroni wrote in the email. “Due to time constraints, Sandusky became unavailable and I was introduced to Phil Foglietta by Ed Savitz & Jerry Sandusky. Foglietta was introduced to us as Coach Phil who coached youth football in NYC. Foglietta agreed to pay $200.00 for child sex and followed us back to a Philadelphia hotel, myself (sic)ad another child prostitute then engaged coach Phil in child sex.”

As DM reports, Bucceroni’s assertions are corroborated by media reports, emails published by Wikileaks, FBI documentation of mafia activity and testimony from a congressional committee hearing obtained through Freedom of Information Act requests.

King ran the now defunct Franklin Community Federal Credit Union in Omaha, Nebraska, and it was alleged that the ring was “a cult of devil worshipers involved in the mutilation, sacrifice, and cannibalism of numerous children.”

During the fall of the credit union, the NY Times reported that State Senator Ernie Chambers of Omaha, said the activities of Lawrence E. King Jr., the credit union’s manager for the last 18 years and the central figure in its collapse, were ”just the tip of an iceberg, and he’s not in it by himself.”

Bucceroni told Disobedient Media that Lawrence King would host trips to “take kids from the South Philly Boys Club to Washington D.C.” Bucceroni explained that he was never tortured by Savitz or Lawrence King and was not personally aware of others being tortured but that Savitz used the “honey approach rather than vinegar.”

Hastert was apparently very close to Lawrence King as well. As TFTP has reported in the past, Hastert, the former speaker of the house under Clinton and Bush is an admitted child rapist whose political connections got him a sweet deal during his prosecution.

Aside from the FOIA requests, WikiLeaks, and mainstream press backing up the claims of Bucceroni, as TFTP recently reported, we are now seeing the curtain get peeled back on DC showing how taxpayer dollars are being spent to cover up the rampant sex abuse taking place in the nation’s capital.

Bucceroni’s allegations not only tie sex trafficking philanthropists to the political elite, but they also encompass the mafia and a pornography empire that would help create and distribute the horrific acts by these monsters.

As DM notes, pornography mogul Richard Basciano was reported to have partnered with mafia notable Robert DiBernado, who The New York Times lists as a captain in the Gambino crime family that was under federal investigation for child pornography at the time of his murder. The New York Times reported that “Mr. DiBernardo and Mr. Rothstein are officers of Star Distributors, a company that Federal prosecutors are investigating for involvement in child pornography.” The New York Daily News also confirms that in the 1980’s, Robert DiBernardo and Ted Rothstein were partners of Richard Basciano. FBI documents state outright that Basciano oversaw Star Distributors, which was referred to as an outlet well known for distributing child pornography.

Aside from his mafia ties, Basciano was also well-connected to the political class.

Basciano had a well-documented friendship with Ed Rendell, a former District Attorney for Philadelphia, former Governor of Pennsylvania and former DNC Chair. Some press reports go so far as to suggest that Rendell shielded Basciano in the aftermath of a 2013 building collapse. An editorial by the Philadelphia Inquirer lamented that “It was disheartening to hear a former mayor, Ed Rendell, defend Richard Basciano,” during the ensuing scandal. The editorial appears to have since been removed from the Inquirer’s site.

Aside from being the former DNC Chair, Rendell was also reportedly involved with the child trafficking ring operating out of Haiti after the 2010 earthquake.

The Obama administration, with the help of Rendell who was the Governor of Pennsylvania, removed children from Haiti—illegally—and transported them back to the US.

Diane Paul, an expert on human rights in disaster zones at the Brookings Institution in Washington, said at the time, according to the Telegraph, “These people were well-intentioned but they were taking children out of the country without the right permission and that just shouldn’t happen.Political pressure should not be used to take children in violation of regulations.”

As DM notes, Wikileaks emails sent during the crisis reveal that in behind-the-scenes discussion of Rendell’s Haitian efforts, Hillary Clinton’s aides characterized Rendell as extremely motivated to remove the children from Haiti as quickly as possible. The discussion included statements by Clinton aides showing an awareness that the children Rendell sought to fly from the earthquake-ravaged island nation included 12 minors who were not involved in any adoption process.

Rendell was so eager to take these children out of Haiti, that Clinton’s aides noted that the Secretary of State herself may be the only person capable of stopping him. “The only person who may be able to back Rendell off is Secretary Clinton. Has anyone looped Cheryl Mills in on this issue?” the email read.

But it gets worse. As DM reports:

Rendell’s intervention in Haiti was not the only human trafficking scandal tied to the former DNC Chair. Bloomberg reported on allegations of “systemic human smuggling” of forced laborers and money laundering documented in relation to a Saipan casino project by Hong Kong-based Imperial Pacific, controlled by Chinese billionaire Cui Lijie. The New York Times wrote that Rendell served on the company’s Advisory Committee. Bloomberg reported that others involved with Imperial Pacific included former Directors of the FBI and CIA, former Mississippi Governor Haley Barbour and a former executive in President Donald Trump’s Atlantic City casino business.

Given the bombshell evidence presented by Bucceroni and delivered by Disobedient Media, which is backed up by massive amounts of evidence, the idea that someone could easily dismiss the allegations of rampant child trafficking among America’s elite as a conspiracy theory is irresponsible at best, and complicit at worst.

On multiple occasions, the Free Thought Project has reported interviews of former child sex trafficking victims who’ve all noted—just like Bucceroni—that they had nowhere to go as police and high-level politicians all took place in the abuse.

This can no longer go on. As DM so eloquently put it, The Huffington Post recently wrote of the Weinstein scandal: “Since Harvey Weinstein’s downfall, we as a society have apparently decided to try this radical new idea called “believing women.” We propose that as a society we also try the radical idea of believing the children.