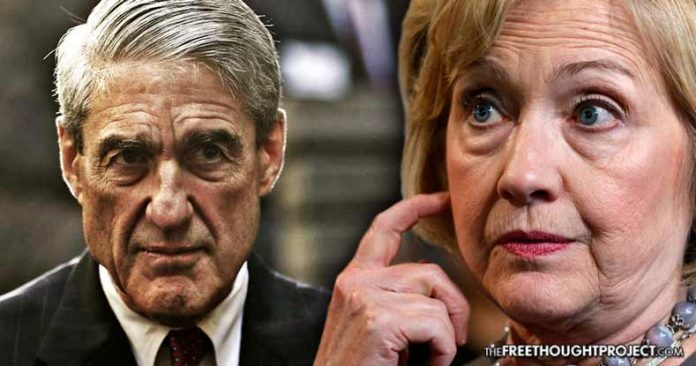 Washington, D.C. — Over the weekend, information about Special Counsel Robert Mueller’s top FBI investigator into ‘Russian meddling’, agent Peter Strzok, being removed from the probe due to the discovery of anti-Trump/pro-Clinton text messages exchanged with a colleague (a colleague whom he also happened to be having an extra-marital affair with) broke.

Now, new information has come to light that reveals that Strzok not only played a leading role in the Hillary Clinton email investigation but potentially saved her from prosecution by changing then FBI Director James Comey’s final statement to read that Clinton was “extremely careless” rather than the original language of “grossly negligent.”

According to a report by CNN:

A former top counterintelligence expert at the FBI, now at the center of a political uproar for exchanging private messages that appeared to mock President Donald Trump, changed a key phrase in former FBI Director James Comey’s description of how former secretary of state Hillary Clinton handled classified information, according to US officials familiar with the matter.

The drafting process was a team effort, CNN is told, with a handful of people reviewing the language as edits were made, according to another US official familiar with the matter.

But the news of Strzok’s direct role in the statement that ultimately cleared the former Democratic presidential candidate of criminal wrongdoing, now combined with the fact that he was dismissed from special counsel Robert Mueller’s team after exchanging private messages with an FBI lawyer that could be seen as favoring Clinton politically, may give ammunition to those seeking ways to discredit Mueller’s Russia investigation.

The damning revelations of FBI politicization prompted a sharp response from Trump on social media:

The new information goes directly to the heart of the claims of politicization of the FBI under former Director James Comey.

During the Clinton email investigation, Strzok conducted the interviews with Huma Abedin and Cheryl Mills, in which they falsely claimed they didn’t know about Hillary’s email server when she was Secretary of State.

NEW: Embattled FBI supervisor Peter Strzok also conducted the interviews with Huma Abedin and Cheryl Mills, in which they falsely claimed they didn't know about Hillary's email server when she was Secretary of State. https://t.co/EZ8B1rG6oq @dailycaller

If you worked for Hillary and lied to @Comey's FBI you got a pass and a ride home.

If you worked for Trump and lied to @Comey's FBI you were forced to plead guilty.

This is why Americans are infuriated, and why @realDonaldTrump needs to shut this charade down. https://t.co/uoM6msLSHm

The extreme politicization of the FBI under Comey, who essentially operated as an internal asset for candidate Clinton, should give pause to every American. The federal intelligence/law enforcement apparatus was clearly abused by the Obama administration in an effort to marginalize those that legitimately challenged the incumbent parties control of the executive branch.

Ironically, this extreme abuse of power — potentially one of the largest scandals in U.S. history — has been censored into oblivion, as the American public has been propagandized into believing a fallacious anti-Russia narrative, largely meant to distract from real crimes committed by the establishment.

If the media was truly concerned about exposing Trump’s collusion with foreign governments, then they should start reporting on Saudi Arabia and Isreal, today.