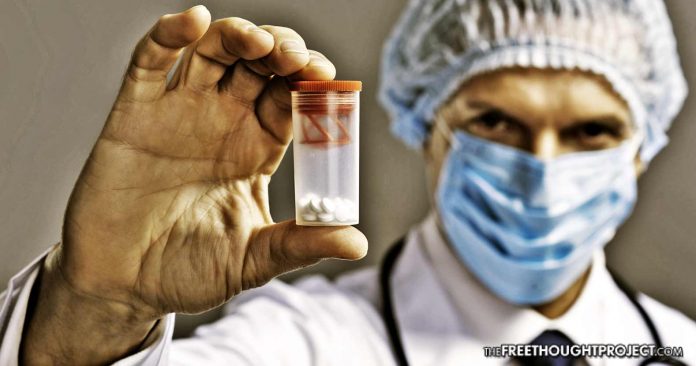 The Food and Drug Administration (FDA) recently approved what may be the world’s first “smart pill.” Abilify MyCite, (aripiprazole) a “pill with a sensor that digitally tracks if patients have ingested their medication” was approved for sale and distribution by the FDA in mid-November. Now, a month after the drug’s approval, several of the world’s leading medical doctors are questioning the ethics surrounding the controversial drug.

Presumably using “compliance” with taking prescribed medicines as justification, the drug, “has an ingestible sensor embedded in the pill that records that the medication was taken.” Abilify MyCite was “approved for the treatment of schizophrenia, acute treatment of manic and mixed episodes associated with bipolar I disorder and for use as an add-on treatment for depression in adults.” Abilify is a selective serotonin reuptake inhibitor (SSRI), a class of drugs which, by law, must contain the following black box warning label for consumers. That black box warning label reads:

• Elderly patients with dementia-related psychosis treated with antipsychotic drugs are
at an increased risk of death. ABILIFY is not approved for the treatment of patients with
dementia-related psychosis. (5.1)
• Increased risk of suicidal thinking and behavior in children, adolescents, and young adults taking antidepressants. Monitor for worsening and emergence of suicidal
thoughts and behaviors. (5.3)

Additionally, Abilify has been linked to serious impulse control problems in patients. In May of 2016, the FDA issued a warning to consumers about the drug’s dangers associated with compulsive and impulsive behavior. According to the FDA, taking Abilify can lead to the following behaviors among others:

Although pathological gambling is listed as a reported side effect in the current aripiprazole drug labels, this description does not entirely reflect the nature of the impulse-control risk that we identified. Additionally, we have become aware of other compulsive behaviors associated with aripiprazole, such as compulsive eating, shopping, and sexual actions…uncontrollable urges…Those with a personal or family history of obsessive-compulsive disorder, impulse-control disorder, bipolar disorder, impulsive personality, alcoholism, drug abuse, or other addictive behaviors. Consider reducing the dose or stopping the medicine if such urges develop.

Did you catch that? The very drug which the FDA just approved for bipolar disorder should be reduced or not taken if those same people develop impulsive or compulsive gambling, shopping, eating, and sexual behaviors. Complicating issues for a drug which is known to cause someone to kill themselves and engage in impulsive behaviors, the FDA has now approved the “smart pill” form of Abilify to ensure the person is taking the medicines as prescribed.

Therein lies the crux of the controversy. Not only is the SSRI Abilify already unsafe for many if not most people to take (black box warning), but the drug may indeed worsen the already impulsive actions of bipolar, and compulsive (OCD) patients.

With the FDA approving the smart pill which links to handheld computers, the family of the patient, the doctor, and presumably the pharmacy and insurance companies can now be certain if the patient is taking the medicines as prescribed. That may be comforting for families who have family members who won’t take their meds. But for people who simply do not want to take medicines which might lead to them killing themselves, have sex with total strangers, or gamble all their money away, the choice may now be taken out of their hands, especially if a judge or a court orders medicinal compliance.

Abilify MyCite, can be swallowed just like any other pill. When that happens, the ingestible sensor inside it sends a message to a patch worn by the patient, which then transmits the information to a mobile app that the patient can monitor. If a patient opts to allow it, the patient’s caregivers and doctor can access the data online, too.

Tia Powell, MD, is the Director of the Montefiore-Einstein Center for Bioethics and the Master of Science in Bioethics program at Albert Einstein College of Medicine. In an op-ed piece for STAT, Dr. Powell wrote:

But what makes Abilify MyCite, a high-tech version of aripiprazole, problematic is that it could easily be incorporated into forced treatment, which ignores the values and preferences of people with mental illness. Involuntary treatment has a long and painful history in mental health. Without their consent, people with mental illness can be committed to inpatient or outpatient treatment, and sometimes forced to take medications.

For those who think forcing Americans to take their medicines is a fictitious, fallacious argument created by tinfoil hat wearing conspiracy theorists, one only needs to answer the question, “Have you had your government mandated vaccinations?” The government already requires all Americans to be vaccinated, with only a few exceptions in a handful of states.

Additionally, as TFTP has reported, children are taken away from parents who attempt to refuse to vaccinate their children. Now, it seems Big Pharma has a plan in place to document whether or not patients are complying with their doctor’s prescriptions. That empirical data can and will be used against citizens should judges force citizens to take their medicines.

Powell, even though she admits some patients may need to be forced to take their medicines, realizes the general public as a whole may indeed be on a slippery slope. She writes:

Manufacturers assure us that patients will consent to using it before taking the pill and its tracking device, a tiny bead embedded in the pill. But this smart pill has an obvious allure in the legal arena. For patients with court-ordered treatment or other involvement in the courts, “consent” takes on a different meaning if exchanged for freedom, child custody, or a lighter sentence.

In other words, prisoners may be released if they consent to take the smart pills. Parents may be offered their children back if they go along with taking the new class of drugs. Or, prosecution may be deferred if the offender will go on medicines such as Abilify. She goes further saying:

It may help some people take their medications as prescribed, but it could also serve as a high-tech form of coercion in psychiatric care. If this new drug is to improve the treatment of people with schizophrenia and bipolar disorder, there needs to be a careful consideration of exactly who will benefit and who could suffer.

The subtle inference to Big Pharma’s profit margins did not go unnoticed. The drugs may actually exploit an untapped market for Big Pharma; those who have been prescribed medicines but have not yet paid for and taken their prescriptions.

Also, as TFTP has reported, taking just one dose of SSRI’s runs the risk of being completely addicted to the dangerous class of drugs for a lifetime. Even though the drugs are not considered addictive by the government’s classifications and standards, qualitative data suggest the drugs are as addictive as any drug both legal or illegal.

With the state’s help, people may indeed be forced to take medicines they would otherwise object to taking, either on the basis of a black box warning label, negative experiences taking SSRI’s, or desiring to flex one’s rights to treat illnesses such as Bipolar disorder and Schizophrenia naturally with vitamins, amino acids (such as GABA and megadoses of Vitamin B), or cannabis.

After calling for an ethical panel to oversee the drug’s implementation, to include sufferers of the targeted illnesses, Dr. Powell concluded:

True progress in psychiatric care includes real respect for those who struggle with mental illness, not just a new way to force treatment upon them.

Peter R. Breggin, MD, also raised the subject of the controversial “Smart Pill” now known as Abilify MyCite. On his Facebok page, Breggin quoted his wife Ginger as remarking the new smart pill is quite “Orwellian.”

Peter R. Breggin, MD, also raised the subject of the controversial “Smart Pill” now known as Abilify MyCite. On his Facebok page, Breggin quoted his wife Ginger as remarking the new smart pill is quite “Orwellian.”

The Psychiatrist and author has been warning consumers and the general public for years about the dangers of psychotropic medicines and the greed associated with the pharmaceutical industry which produces such destructive medicines. In his book Psychiatric Drug Withdrawal, Dr. Breggin helps lead patients down a path to healing and restoration, helping them get off of their dangerous prescriptions.

If you want to know more about how the government forces kids to take antidepressants, how dangerous they are with respect to mass murderers, homicide and suicide, and how Big Pharma is profiting from a drug which literally destroys lives, feel free to peruse our antidepressant archives by clicking here.