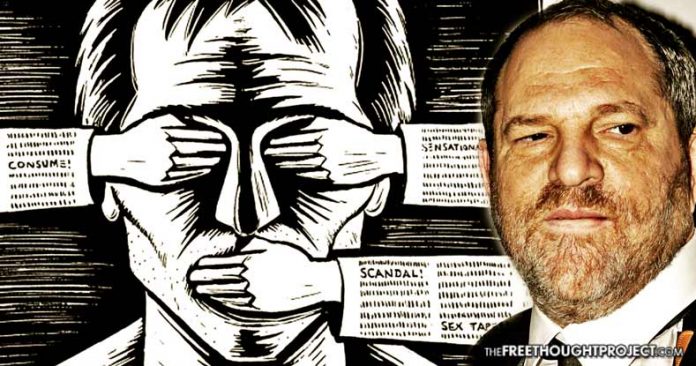 It is no secret that success in life can often stem from who you know—but while the connections you make may be willing to vouch for your character in some instances, would they continually work to protect your reputation by suppressing the truth and ignoring dozens of allegations of sexual assault? In the case of elite moguls like Harvey Weinstein, the answer is yes.

The women who have come forward about their encounters with Weinstein have told stories of a sex-obsessed Hollywood producer who used his ability to give them a role in a movie that would launch their career as an excuse to sexually assault them. But it was not just Weinstein—he had an entire team behind him, enabling his behavior.

In a lawsuit accusing Weinstein of violating sex-trafficking laws, British actress Kadian Noble claimed Weinstein enticed her to come up to his hotel room to discuss a possible role in a movie. When Weinstein began touching Noble, and she indicated that she was uncomfortable, she said he put her on the phone with a producer from his company. The producer told Noble that “she needed to be ‘a good girl and do whatever he wished,’ and if she did, then ‘they would work’ with her further.”

However, Harvey’s protection extended beyond The Weinstein Company. According to a report from The New York Times, Weinstein held the coveted title of “F.O.P” or “Friend of Pecker,” which signaled his close friendship with David Pecker, the chief executive of American Media Inc. who is responsible for publications such as the National Enquirer, Star, Sun, Weekly World News and Globe.

In addition to avoiding negative press from the magazines and tabloids owned by his friends, the Times also claimed that many of the journalists who covered stories about Weinstein sought his approval, and they often “negotiated book and movie deals with him” in the process of covering stories about him.

“Weinstein held off press scrutiny with a mix of threats and enticements, drawing reporters close with the lure of access to stars, directors and celebrity-packed parties. Some journalists negotiated book and movie deals with him even as they were assigned to cover him. The studio chief once paid a gossip writer to collect juicy celebrity tidbits that Mr. Weinstein could use to barter if other reporters stumbled onto an affair he was trying to keep quiet.”

Weinstein’s close friends included Jeff Bezos, chief executive of Amazon and owner of the Washington Post. According to the report from the Times, Bezos reached out to Weinstein over email when he was concerned about the Wall Street Journal publishing a negative story on the environment at Amazon Studios.

Weinstein replied and said he was “happy to coordinate with whoever you’d like, as a friend of the court.” He encouraged Bezos to hit back at the Wall Street Journal with an aggressive response, and offered Bezos the services of Weinstein’s libel lawyer who “makes sure everyone sticks to the right narrative.”

Weinstein’s reputation as a sexual predator was not a secret in the industry. While several actresses have said they warned other women about Weinstein, agents and managers were also aware of Weinstein’s reputation—yet they still “sent actresses to meet him alone at hotels and advised them to stay quiet when things went wrong.”

“Agents and managers across Hollywood, who wanted in on Mr. Weinstein’s star-making films, sent actresses to meet him alone at hotels and advised them to stay quiet when things went wrong. ‘That’s just Harvey being Harvey,’ more than one agent told a client. At [Creative Artists Agency], for example, at least eight talent agents were told that Mr. Weinstein had harassed or menaced female clients, but agents there continued to arrange private meetings.”

While this report is from The New York Times, it should be noted that in addition to being a part of the mainstream media, the Times has been directly responsible for censoring reports that could have exposed Weinstein’s actions 13 years ago.

Former New York Times reporter Sharon Waxman claimed that she attempted to reveal the truth about Weinstein in 2004. She flew to Italy to investigate claims of a man who was paid hundreds of thousands of dollars to schedule Russian escorts for Weinstein. But when Weinstein found about the possibility of Waxman’s report being published, he convinced the Times to shut it down.

“The story I reported never ran,” Waxman wrote. “After intense pressure from Weinstein, which included having Matt Damon and Russell Crowe call me directly to vouch for Lombardo and unknown discussions well above my head at the Times, the story was gutted. I was told at the time that Weinstein had visited the newsroom in person to make his displeasure known.”