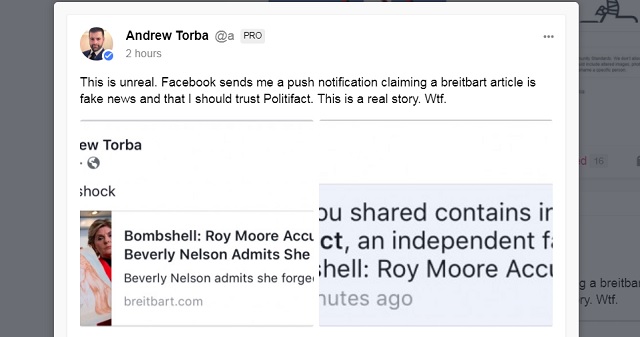 Facebook is suppressing the bombshell news of Roy Moore accuser Beverly Young Nelson “admitting she forged” parts of her yearbook inscription that she claimed was signed by Roy Moore.

According to Nelson’s lawyer Gloria Allred back in November, Nelson said she “is willing to testify under oath before the U.S. Senate that there has been no tampering.”

Nelson said in her initial statement with Allred that Moore wrote the entire inscription in her yearbook.

“He wrote in my yearbook as follows,” Nelson said. “‘To a sweeter and more beautiful girl I could not say Merry Christmas. Christmas 1977. Love Roy Moore, Olde Hickory House.’ And he signed it ‘Roy Moore D.A.'”

Nelson admitted she did tamper with the yearbook in an interview with ABC News released Friday as Breitbart accurately reports:

Beverly Young Nelson has finally admitted that she forged a portion of the infamous high school yearbook that she and attorney Gloria Allred used as proof of her accusations against U.S. Senate candidate Roy Moore.

And in yet another blow to the credibility of ABC News, the disgraced, left-wing network downplayed the bombshell by presenting this admission of forgery as adding “notes” to the inscription. Worse still, the reporter actually coaches Nelson, puts words in her mouth, downplay the enormous significance of her deceit.

Beverly Young Nelson, one of the women accusing GOP Senate candidate Roy Moore of sexual misconduct, tells @GMA it “sickens” her to think what might happen if Moore is elected. https://t.co/wuEGWr0kng pic.twitter.com/lcp5OY4x3A

“Nelson admits she did make notes to the inscription,” ABC News tells us. “But the message was all Roy Moore.”

“And you made some notes underneath.”

And then, after a woman admits to forging a document used in a campaign to destroy the Republican nominee for the U.S. Senate in Alabama, ABC News quickly moves on as though it is not news of extraordinary consequence.

Llamas also fails to ask any follow-ups, such as “If the explanation is this simple, why wait all these weeks to offer it?” Or, “Why did you lie?”

This is quite possibly the biggest bombshell admission of the year, nonetheless Facebook is censoring the story because the partisan hack “fact checkers” at Politifact proclaimed it was a “pants on fire” lie and fake news. Politifact’s article “debunking” the story [archived here] is the epitome of fake news and an indictment on their entire organization. If Poynter had any integrity (fact check: they don’t), then they would kick Poltiifact out of their International Fact-Checking Network for violating their “fact-checkers’ code of principles.”

Let’s dig into Politifact’s outright lies in their article, “No, Roy Moore accuser didn’t admit she forged his signature in her yearbook,” starting from the beginning [all emphasis added]:

A conspiracy-minded website attempted to cast doubt on evidencepresented by one of eight women who accused Roy Moore of sexual assault in a misleading headline days ahead of the Alabama Senate race.

Note, they start with biased contextualization to downplay the significance of the admission.

Beverly Young Nelson accused Roy Moore of groping her when she was 16 years old and he, in his 30s, was the deputy district attorney of Etowah County. As evidence, Nelson presented a note she said Moore wrote in her high school yearbook before the incident took place. Nelson has been represented by celebrity lawyer Gloria Allred.

The inscription reads, “To a sweeter, more beautiful girl I could not say Merry Christmas. Christmas 1977. Love, Roy Moore, D.A.”

Moore’s defenders have pointed out the date and place seem to have been written in different ink and handwriting than the note. 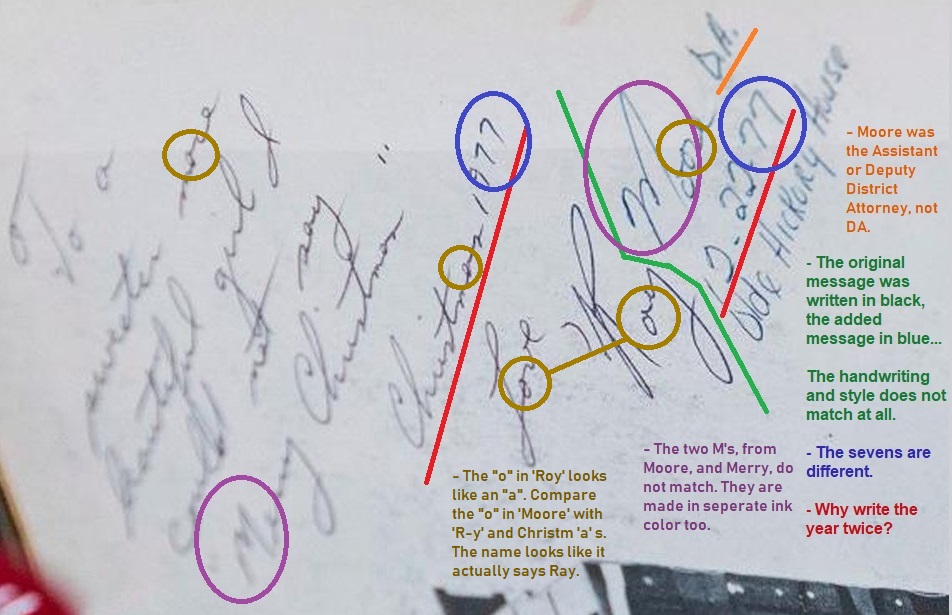 Politifact completely misrepresents their argument and says they only question “the date and place.”

In a Dec. 8 Good Morning America interview with Nelson about Moore’s response to the allegations (he denies them) and her experience since taking her story public, Nelson addressed the inconsistency. Nelson said she added the date and place of the inscription.

“And you made some notes underneath?” Llamas asked.

“Nelson said she did make notes to the inscription, but the message was all Roy Moore,” the video voiceover says.

To summarize, Nelson says she added the time and location to the inscription. But she says the note and signature was from Moore.

Note there’s no source for Politifact’s claim. She concurred in the coached interview she “made some notes underneath.”

Gloria Allred, an attorney for Nelson, said Friday that Moore did not write several notes at the end of the inscription, including the location, the date, and the initials “D.A.” after his signature. Allred said those notes were added later by Nelson “to remind herself of who Roy Moore was and where and when Mr. Moore signed her yearbook.”

[…]In her initial statement, Nelson said that Moore had written the entire inscription in her yearbook. “He wrote in my yearbook as follows,” said Nelson. “‘To a sweeter and more beautiful girl I could not say Merry Christmas. Christmas 1977. Love Roy Moore, Olde Hickory House.’ And he signed it ‘Roy Moore D.A.’”

Now back to Politifact:

That’s not what the headlines of the Gateway Pundit, Breitbart or Silence is Consent. All three say Nelson said she either tampered with Moore’s signature or forged the inscription.

There’s no evidence of that.

Yet, the Gateway Pundit wrote that “Nelson admitting that she added to Moore’s alleged signature is the final nail in the coffin,” the story reads. “Allred’s accuser is nothing but a fame-seeking fraud.”

But Nelson does not claim she tampered with Moore’s actual signature. She said she added a time and location below the signature. Nelson still attributes the note and signature to Moore.

We rate the statement Pants on Fire.

She claimed she did not tamper with the yearbook, then admitted she did. One look at it shows it’s a different color ink, misaligned, and different handwriting, yet according to Politifact there’s “no evidence” the signature or the inscription was tampered with.

This is the definition of fake news. Partisan leftists’ fake news is being used to suppress a bombshell real news story which could sway an election.

If you needed any more evidence this entire “fake news” scheme was nothing more than an excuse to suppress real news which makes Democrats look bad, look no further.

As I said before, if Poynter has any integrity then they should kick Politifact out of their International Fact-Checking Network for violating their stated fact-checkers’ code of principles.