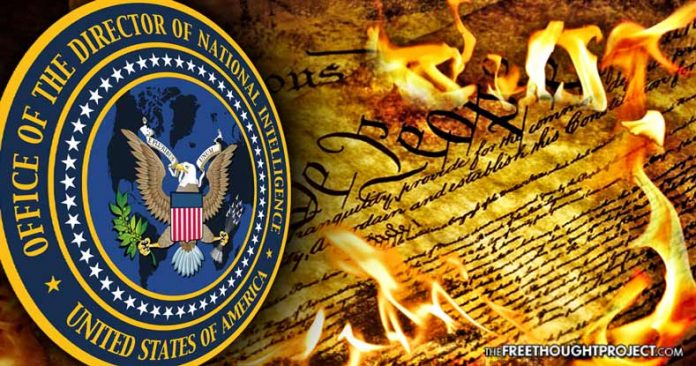 As the United States Congress runs out of time to vote on a bill that would reauthorize one of the government’s most egregious warrantless spying programs, officials are claiming that those programs won’t end anytime soon—even if they are not reauthorized by the end of the year.

The USA Liberty Act will reauthorize Section 702 of the Foreign Intelligence Surveillance Act (FISA), which is set to expire on Dec. 31, 2017. While the bill’s proponents have claimed it will help ensure “security” in the United States, privacy advocates have warned that will provide additional loopholes for the government to continue conducting warrantless surveillance of innocent Americans.

The assumption may be that if the USA Liberty Act is not signed into law, then the provisions from Section 702 will no longer be legal and the U.S. government will stop collecting data from innocent Americans without warrants—but intelligence officials do not see it that way.

A spokesman for the Office of the Director of National Intelligence, Brian Hale, told the New York Times that “the government believes it can keep the program going for months,” even if it is not reauthorized.

Hale’s reasoning stems from the fact that every year, the Foreign Intelligence Surveillance Court authorizes the program to operate for the next 12 months. Section 702 was last authorized by the court on April 26, 2017, leaving some lawmakers hopeful that even if the Liberty Act does not pass before the end of the year, Congress will find a way reauthorize Section 702 before it actually expires on April 26, 2018.

Hale cited the “Transition Procedures” for the provision, which accompany the law in federal statute books. He told the Times that the procedures make it “very clear” that “any existing order will continue in effect for a short time even if Congress doesn’t act to reauthorize the law in a timely fashion.”

According to the definitions of Transition Procedures for the Protect America Act of 2007’s provisions for “Challenge of Directives, Protection from Liability; Use of Information” concerning the Foreign Intelligence Surveillance Act, Section 702 “shall continue to apply with respect to any directive issued pursuant to section 702 of such Act.”

While this loophole may give hope to some government officials who are in favor of violating Americans’ constitutional rights while selling them a false sense of security, NSA Whistleblower Edward Snowden referred to it by writing on Twitter, “Bypass the Fourth Amendment with one weird trick.”

Bypass the Fourth Amendment With One Weird Trick https://t.co/QHFE9vIfq3

The Times also cited anonymous intelligence officials who reportedly said that “the government is making no plans to immediately turn off the program on New Year’s Day, no matter what happens in Congress.”

Sen. Ron Wyden, a Democrat from Oregon, told the Times that he is prepared to have “a full and open debate” over the legality of the USA Liberty Act, even if Congress delays that debate until next year.

“We’ve seen this movie before: wait until the last minute, and then say, ‘crowded congressional calendar, dangerous world, we’ve just got to go along with it,’” Wyden said. “Anything now that creates an opportunity for several months of real debate, I’ll listen to.”

Rep. Justin Amash, a Republican from Michigan, has also been critical of the USA Liberty Act. When it passed the House Judiciary Committee by a vote of 27-8 last month, Amash noted that all privacy advocates should be concerned about the overwhelming support the bill is receiving from Congress.

“The Liberty Act passed committee 27-8. It allows the government to search our private data without a warrant—in violation of the 4th Amendment,” Amash wrote on Twitter. “It’s another bill, like the Freedom Act, that furthers violations of our rights under the guise of protecting our rights.”

The #LibertyAct passed committee 27-8. It allows the government to search our private data without a warrant—in violation of the #4thAmendment. It’s another bill, like the #FreedomAct, that furthers violations of our rights under the guise of protecting our rights.

While advocates of the USA Liberty Act will claim that it is necessary in order to ensure that Americans are “safe,” it is important to remember that the surveillance programs that were adopted after 9/11 have never actually stopped a terrorist attack on U.S. soil. In the same way that the USA Patriot Act was the opposite of patriotic in 2001, the USA Freedom Act also took away freedom in 2015. Do not be fooled by the title—the USA Liberty Act in 2017 has nothing to do with expanding “liberty.”