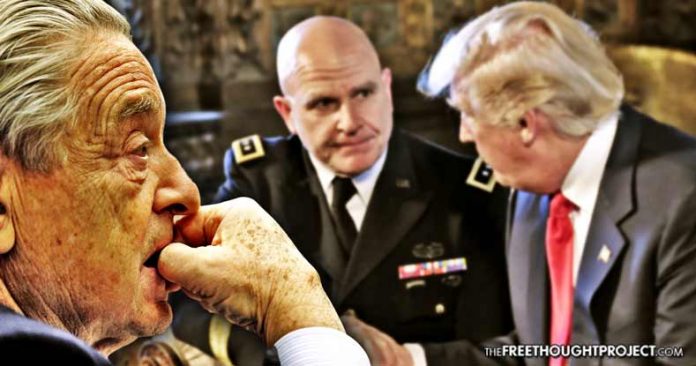 Washington, D.C. – A member of the Trump transition team and former CIA paramilitary officer, John R. Maguire, reportedly revealed during a meeting prior to an intelligence-gathering operation in Afghanistan, that President Trump’s National Security Advisor H.R. McMaster—the highest-ranking intelligence official in the U.S. government—“authorized surveillance of Steven Bannon and Trump family members, including Donald Trump Jr. and Eric Trump,” then proceeded to send the collected data to a surveillance facility in Cyprus owned by billionaire globalist George Soros, according to The Gateway Pundit.

Additionally, according to a report by The Intercept:

“[Maguire] said there were people inside the CIA who joined in the previous eight years [under Obama] and inside the government and they were failing to give the president the intelligence he needed,” said a person who was pitched by Maguire and other Amyntor personnel. To support his claim, Maguire told at least two people that National Security Advisor H.R. McMaster, in coordination with a top official at the National Security Agency, authorized surveillance of Steven Bannon and Trump family members, including Donald Trump Jr. and Eric Trump. Adding to these unsubstantiated claims, Maguire told the potential donors he also had evidence H.R. McMaster used a burner phone to send information gathered through the surveillance to a facility in Cyprus owned by George Soros.

For those unfamiliar with Soros, he is a champion of progressive causes globally and funds his Open Society Foundation to the tune of tens of billions of dollars. Although operating under the guise of a global philanthropist, Soros works to fund NGOs as a means of destabilizing targeted governments.

This is not the first time a McMaster-Soros connection has been exposed, as back in August, we reported that news out of Israel revealed that National Security Advisor H.R. McMaster is working as an inside operative for globalist billionaire George Soros, according to a number of domestic and foreign intelligence sources.

“I have confirmed from sources from inside the White House, the Israeli government and Israeli intelligence that the Israelis have intercepted email communications from General McMaster to George Soros, informing him of everything that’s going on inside the White House,” reported longtime political operative Roger Stone. “…I have double checked this with two different sources very high up in Israeli intelligence, and I actually expect the Israeli ambassador to the US to confirm this.”

Interestingly, when Trump visited Israel on his first overseas trip, McMaster was curiously excluded from the meeting with Israeli Prime Minister Benjamin Netanyahu and his national security team, which broke from standard protocol.

According to Kafe Knesset, Trump met with Netanyahu, starting with a one-on-one meeting. The forum was soon expanded by several advisors on each side, including Jared Kushner, Jason Greenblatt and Ambassador David Friedman on the U.S. side, according to Israeli officials.

Secretary of State Rex Tillerson was later invited into the meeting, per an official, but “McMaster sat outside the King David room during the course of the entire meeting.”

One former U.S. officials told Kafe Knesset that the national security advisor’s exclusion from the meeting was “highly unusual.”

“For the President to prioritize his son-in-law and his lawyer over the National Security Advisor for these kind of strategic discussions is unconventional, to say the least,” an official said.

Now, perhaps we know why.

According to an investigation by Breitbart:

The International Institute for Strategic Studies (IISS), where White House National Security Adviser H.R. McMaster is listed as being a member for eleven years, this week added George Soros’s Open Society Foundations and another Soros-financed group to the list of donors on its website in response to a Breitbart News request on the matter.

From September 2006 to February 2017, McMaster is listed as a member of International Institute for Strategic Studies (IISS), where he served as consulting senior fellow. The IISS describes itself as a “world-leading authority on global security, political risk and military conflict.”

Back in July, Israel publicly accused Soros of attempting to continuously destabilize legitimately elected governments to forward his own agenda. With these latest revelations, it has become clear that McMaster has become one of the main conduits for strategic leaks to the mainstream media—in an effort to undermine Trump’s foreign policy goals.

Soros’ infiltration of the National Security Council began with operative Fiona Hill, a member of the Council on Foreign Relations and the Soros-funded Eurasia Foundation, in May of this year.

“George Soros has penetrated the Trump White House,” Stone reported. “Soros has planted a mole infiltrating the National Security apparatus: a woman named Fiona Hill, who has a Harvard background, and has been on the Soros payroll and the payroll of the Open Society Institute.”

Previously, Hill had assisted the Soros-founded Central European University in Hungary to attempt to influence Hungarian government policy, as the government has steadfastly attempted to rebuff Soros’ interference while refusing to abide by EU migrant quotas.

Earlier this year, journalist Mike Cernovich engaged in a full-frontal assault on McMaster as a globalist puppet and exposed numerous troubling revelations:

The Trump administration is reportedly considering a proposal by Maguire and Blackwater founder Erik Prince to create a privatized global spy network that would operate outside the standard intelligence bureaucracy as a means of circumventing what the White House believes is unreliable and politically tainted intelligence. If you thought the CIA was bad, imagine an intelligence network ran by one of the most murderous groups of mercenaries in the history of the world.

There is general recognition within the Trump administration that there is a deep state soft coup being carried out, which began under the Obama administration. There was intense political espionage carried out on the Trump campaign under the guise of a national security investigation using the fallacious Russia dossier, paid for by the Clinton/DNC camp, as “evidence” to gain surveillance warrants on team Trump in the FISA court.

Essentially, the U.S. intel apparatus was deeply complicit in political espionage carried out by the Obama administration against the opposition party’s most powerful candidate, and the administration is now considering ways to circumvent being the recipient of cooked intelligence.

It is important to note that simply reporting on this coup against Trump is not an endorsement of his policies but is merely done to expose the powers that be.

(CIA Director) Pompeo can’t trust the CIA bureaucracy, so we need to create this thing that reports just directly to him. It is a direct-action arm, totally off the books. The whole point is this is supposed to report to the president and Pompeo directly.

A source reportedly told The Intercept that the plans were pitched to the White House as a means of countering “deep state” enemies in the intelligence community seeking to undermine Donald Trump’s presidency.

Two former senior intelligence officials told The Intercept that Pompeo has embraced the plan and lobbied the White House to approve the contract.

When asked for comment, a CIA spokesperson reportedly told The Intercept, “You have been provided wildly inaccurate information by people peddling an agenda.”

The irony of the CIA’s statement is uncanny.

In review, we have a rogue American intelligence apparatus colluding with a globalist billionaire and his political minions to take down the elected President of the United States, with the White House considering creating a privatized intelligence agency to circumvent what it sees as unreliable and tainted intelligence.

What could go wrong?!

Far from operating as a bastion of liberal western democracy, the attempted coup taking place has clearly exposed the U.S. as being nothing more than an illiberal 3rd-world banana republic operating with a simple facade of freedom and justice.