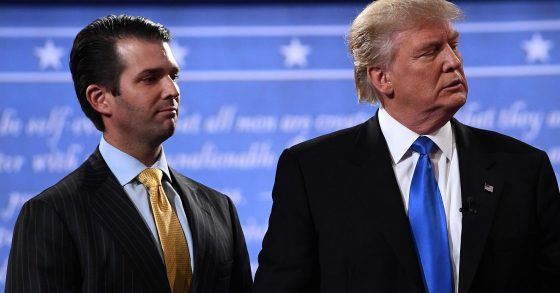 The openly anti-Trump news network CNN misreported numerous key details in a fake “bombshell” news story that pathetically tried to connect Donald Trump Jr. and Wikileaks by quoting an email that was randomly sent to Trump that contained a link to a Wikileaks data dump file.

CNN originally claimed that the email was sent on September 4th, 2016 which in turn allowed the propaganda network to insinuate that Trump Jr. was given hacked documents from Russia before they were publicly released by Wikileaks 9 days later.

The problem? The email was actually sent on September 14th which changes the entire story into literally a nothingburger about a random email sent to the Trump campaign by a concerned voter that contained nothing more than a link to publicly available information rather than some explosive revelation that Trump Jr. was receiving intelligence straight from Russia days before it was actually released to the world.

The date matters. CNN’s report indicated that the Trump campaign had been fed hacked email files belonging to the Democratic National Committee and former secretary of state Colin Powell more than a week before the files were released publicly.

“Interestingly,” CNN reporter Manu Raju said on the air, “the same day that Donald Trump Jr. received this email was the first time that he appears to have tweeted about WikiLeaks.”

CNN presented the timing of Trump Jr.’s tweet as a possible reason to doubt his claim that he never even saw the email.

The later email date reported by The Post means that Trump Jr.’s first tweet about WikiLeaks could not have been prompted by the email, since the president’s eldest son did not receive the message until 10 days after tweeting.

More important, the later date means that the email did not provide the Trump campaign with early access to WikiLeaks documents after all.

This truly is fake news on steroids.

A lawyer for Trump Jr., Alan S. Futerfas, not only destroyed the notion that the email was anything nefarious, he also made clear that the sources for the original fake news story by CNN were most likely Democrats on the House Intelligence Committee who leaked confidential information about Trump Jr’s testimony in yet another obvious attempt at further hurting the president.

“The email was never read or responded to and the House Intelligence Committee knows this,” Futerfas said in a statement. “It is profoundly disappointing that members of the House Intelligence Committee would deliberately leak a document, with the misleading suggestion that the information was not public, when they know that there is not a scintilla of evidence that Mr. Trump Jr. read or responded to the email.”

“We are concerned that these actions, combined with the deliberate and misleading leak of a meaningless email, undermines the credibility of the serious work the House Intelligence Committee is supposedly undertaking,” Futerfas continued.

Amazingly, another noted anti-Trump news outlet, The Washington Post, were the ones to first report CNN’s error in a move that allowed them to pretend that this was an accidental error while laughably claiming that it also proves that the mainstream media can and does police themselves.

In fact, after their report proved that CNN had published fake news, the Post actually published another article that decried the fact that the president had picked up on the disinformation and was once again using it to attack the mainstream media.

You could practically hear the cry of “fake news” building in President Trump’s lungs before he took the stage in Pensacola and let it rip.

The “fake news” label suggests intentional deception, but there is no evidence that this was anything but a mistake. Plus, The Post’s report on the true date of the email is an example of how the press often polices itself — contrary to conspiratorial notions of a “corrupt cabal,” as Sean Hannity calls the media.

Still, a week after ABC made an even bigger error that also involved the inaccurate reporting of an event’s timing, CNN’s slip-up played into Trump’s effort to cast the media as unreliable and out to get him.

Yes, you read that right. Despite the fact that The Post most likely only published their report that exposed CNN in order to get ahead of a conservative news outlet doing the same, one of their reporters is actually claiming that this proves that there is not corruption or bias in the mainstream media against Donald Trump.

This is of course absolutely laughably as both CNN and The Washington Post have been some of the leading anti-Trump news outlets who have not only published direct lies about the president, but have also been selectively leaked classified material in order to build up the fake narrative that Russia specifically helped Trump win the election.

The fake CNN story is only the latest example of the direct propaganda war that the establishment media is currently conducting against both the president and the American people as a whole.