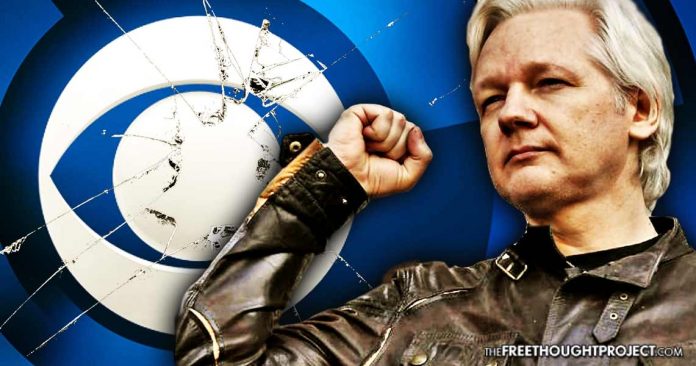 (RT) — WikiLeaks founder Julian Assange has challenged the owners of CBS to a $100,000 bet that the network’s story about the whistleblowing website alleged links to the Trump family is false.

Assange lambasted the network on Twitter, calling them a “pathetic excuse for a media organization” after they published a story claiming WikiLeaks offered Donald Trump Jr. early access to leaked documents in September 2016.

Assange called the story “fake news” and bet the majority owners of CBS, the Redstone family, $100,000 that the claim is false.

This is fake news, CBS, you pathetic excuse for a media organization. I challenge your controlling oligarchs, the Redstone family, to a $100k bet that "providing access through WikiLeaks" to our unpublished information is false. https://t.co/V9A0h4eakw

Broadcasters CBS and CNN ran the story claiming Trump Jr. and other members of the Trump campaign, including Donald Trump himself, were sent an email containing a website URL and decryption key that would allow them view unpublished WikiLeaks material in September 2016.

CNN's initial reporting of the date on an email sent to members of the Trump campaign about Wikileaks documents, which was confirmed by two sources to CNN, was incorrect. We have updated our story to include the correct date, and present the proper context for the timing of email

CBS cited a source who they said received the email, while CNN claimed they were given the scoop from congressional investigators. CNN later published a correction, in lieu of a full retraction, to say the email sent to the Trump campaign “indicates that the writer may have simply been flagging information that was already widely available.”

CNN still refuses to address the huge, glaring obvious question: how did "multiple sources" all innocently get the same date on the same email wrong? And how/why did this also happen to MSNBC? What's the explanation for that?? https://t.co/izlKdpeHbR pic.twitter.com/AsZaupZ3Ph

President Donald Trump launched his own attack against CNN via Twitter Saturday, calling for those responsible for the ‘fake news’ gaff to be fired, and making fun of the channel’s signature slogan “the most trusted name in news”, which he says is a possible “fraud” against the American public.

“There are many outlets that are far more trusted than Fake News CNN. Their slogan should be CNN, THE LEAST TRUSTED NAME IN NEWS!” Trump tweeted.

Fake News CNN made a vicious and purposeful mistake yesterday. They were caught red handed, just like lonely Brian Ross at ABC News (who should be immediately fired for his “mistake”). Watch to see if @CNN fires those responsible, or was it just gross incompetence?