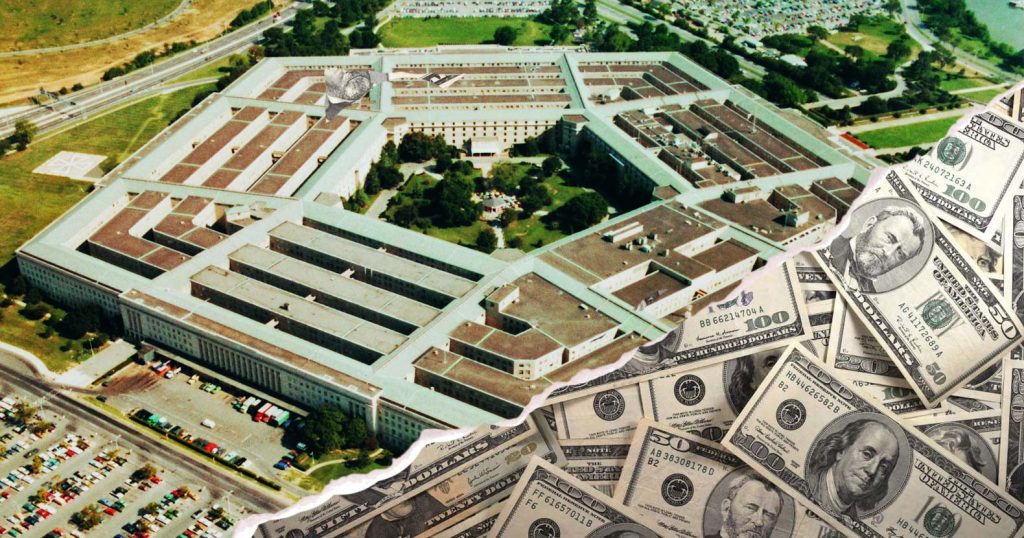 “The Defense Department is starting the first agency-wide financial audit in its history,” the Pentagon’s news service said this week, announcing that they are finally going to follow through with something they promised to do for years.

Beginning in 1996 all federal agencies were mandated by law to conduct regular financial audits. However, the Pentagon has NEVER complied with that federal law. In 20 years, it has never accounted for the trillions of dollars in taxpayer funds it has spent, in part because “fudging” the numbers has become standard operating procedure at the Department of Defense, as revealed in a 2013 Reuters investigation by Scot Paltrow, which detailed the illicit tasks of 15-year employee, “Linda Woodford [who] spent the last 15 years of her career inserting phony numbers in the U.S. Department of Defense’s accounts.”

“Over the last 20 years, the Pentagon has broken every promise to Congress about when an audit would be completed,” Rafael DeGennaro, director of Audit the Pentagon, told the Guardian earlier this year. “Meanwhile, Congress has more than doubled the Pentagon’s budget.”

In what will likely be an immense and highly politicized dog any pony show, the Pentagon is now claiming this will start immediately.

“It demonstrates our commitment to fiscal responsibility and maximizing the value of every taxpayer dollar that is entrusted to us,” chief Pentagon spokesperson Dana W. White said.

“Beginning in 2018, our audits will occur annually, with reports issued Nov. 15,” the Defense Department’s comptroller, David L. Norquist, said, noting the audits will now be an annual task.

As NPR reports, as for how the audit would work, Jim Garamone of the official DoD News agency reports that the department’s Office of the Inspector General has “hired independent public accounting firms to conduct audits of individual components — the Army, Navy, Air Force, agencies, activities and more — as well as a departmentwide consolidated audit to summarize all results and conclusions.”

Exactly what will come of this enormous feat of counting the money spent on spreading the American empire remains a mystery. However, what is not a mystery is the trillions that have “gone missing” as a result of the Pentagon’s refusal to comply with 20 years of audits.

As TFTP reported at the time, a Department of Defense Inspector General’s report, released in 2016, left Americans stunned at the jaw-dropping lack of accountability and oversight. The glaring report revealed the Pentagon couldn’t account for $6.5 trillion dollars worth of Army general fund transactions and data, according to a report by the Fiscal Times.

According to the report by the Fiscal Times:

“An increasingly impatient Congress has demanded that the Army achieve “audit readiness” for the first time by Sept. 30, 2017, so that lawmakers can get a better handle on military spending. But Pentagon watchdogs think that may be mission impossible, and for good reason…

The Defense Finance and Accounting Service (DFAS), the behemoth Indianapolis-based agency that provides finance and accounting services for the Pentagon’s civilian and military members, could not provide adequate documentation for $6.5 trillion worth of year-end adjustments to Army general fund transactions and data.

The DFAS has the sole responsibility for paying all DOD military and personnel, retirees and annuitants, along with Pentagon contractors and vendors. The agency is also in charge of electronic government initiatives, including within the Executive Office of the President, the Department of Energy and the Departing of Veterans Affairs.”

While there is nothing in the IG’s report specifying that the money has been stolen, the mere fact that the Pentagon can’t account for how it spent the money reveals a potentially far greater problem than simple theft alone. Also, other reports put the toll of missing money upwards of $10 trillion.

The accounting errors and manipulated numbers, though obviously problems in their own right, highlight a far greater problem for the Defense Department than only bad recording keeping and wasteful spending habits. In reality, they are a representation of the poor decision-making, and lack of oversight and accountability that plague our nation’s government as a whole and this audit, however promising on the surface, will likely prove to be more of the same.