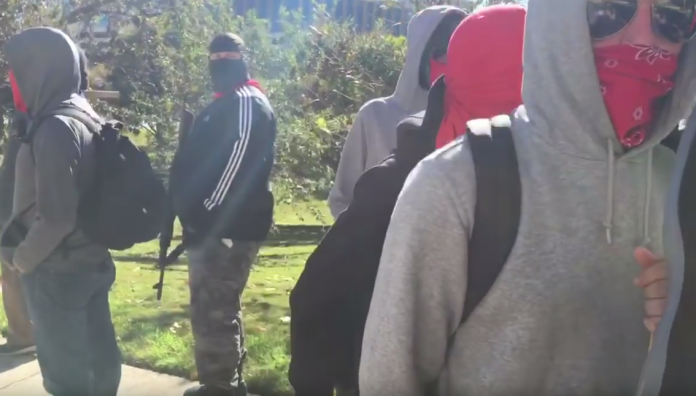 AUSTIN (INTELLIHUB) — Armed and masked ANTIFA members rallied at Woodridge Square Saturday where they were captured on camera blocking a fellow Austinite from passing by on a public sidewalk as they prepared to bullhorn a group honoring Kate Steinle who was shot in the Summer of 2015 by an illegal alien while walking her dog along a California pier.

“A bunch of ANTIFA protesters showed up with megaphones to bullhorn an event that is honoring someone that is dead,” Shroyer said as he approached the square with his camera rolling. “Let’s see whats going on here.”

The group of masked wannabe thugs, some holding rifles, spotted Infowars reporter and host of “The War Room” Owen Shroyer arriving from a distance and decided to block him from covering the event by forming a blockade on a public sidewalk.

“Here I go, literally they won’t let me in here,” the reporter said as he tried to enter the park with no luck. “This is obviously insane.”

Police stood by and watched for minutes as the thugs wouldn’t permit Shroyer to enter.

Eventually, Shroyer took the bull by the horns and outran the masked crusaders which allowed him to make his way further into the square.