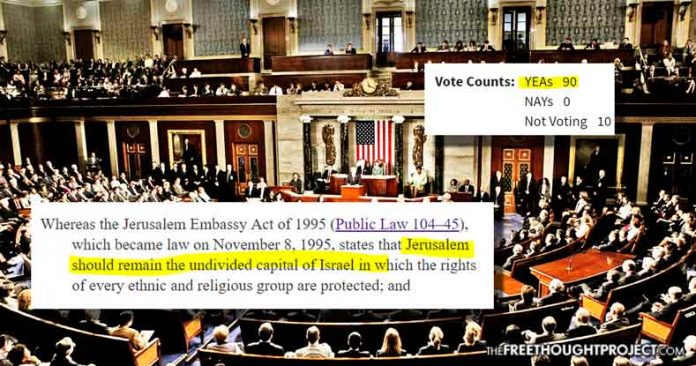 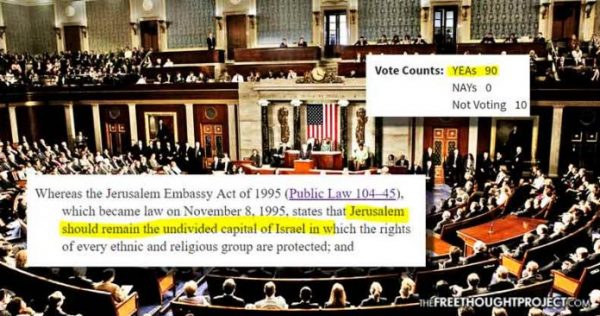 Hypocrisy in politics is as inevitable as the tide. However, all too often, partisan politics and the two-party paradigm draw people into a state of cognitive dissonance in which they can hold two entirely contradictory ideas as a single truth—just so long as their political rulers tell them to do so.

Case in point: Donald Trump vehemently opposed the Afghanistan and ran on a campaign to end it but when he got into office, he voted to extend it and his support base did not decry him for it. But it’s not just Trump and the right, hypocrisy is rife throughout the nation’s capital—no matter which side of the aisle you think has your interests at heart.

“The future of Jerusalem is an issue that should be decided by Israel and the Palestinians, not unilaterally by the United States,” Sen. Dianne Feinstein, D-Calif., wrote to Trump last week. “Recognizing Jerusalem as Israel’s capital — or relocating our embassy to Jerusalem — will spark violence and embolden extremists on both sides of this debate.”

Sounds reasonable, right? What business does American have telling other countries where they can have their capital? Would the US listen if Israel told us to that our capital is now Montreal, Canada?

But Feinstein’s view—like every single Democrat in the Senate—is little more than lip service to keep the charade of opposition to Trump alive. To prove this point, one need only look at the Roll Call Vote 115th Congress – 1st Session, just six months ago.

On June 5, 2017, the US Senate held a roll call vote on S.Res.176. During this vote, every single Democrat that was present and every single Republican voted ‘yea.’ 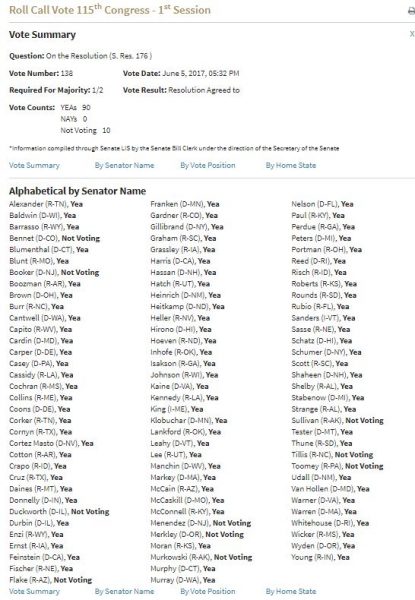 The ‘yea’ votes affirmed the Jerusalem Embassy Act of 1995 (Public Law 104–45), “which states that Jerusalem should remain the undivided capital of Israel in which the rights of every ethnic and religious group are protected.”

The #McResistance: In a vote just six months ago every Democrat in the Senate from Chuck Schumer to Elizabeth Warren demanded Trump move the U.S embassy to Jerusalem. #AIPAC #CUFI #Zionism https://t.co/RZxoOkffNc pic.twitter.com/PLPse23oID

Feinstein’s comments now versus her vote then, highlight this government hypocrisy and the tendency of politicians to talk out of the side of their mouths to keep the illusion of democracy alive.

While it is most assuredly not the job of America to devote billions in money and resources to another country to maintain political strongholds in every region of the world, the idea of Jerusalem being Israel’s undivided capital and supporting embassy move has been supported by every presidential nominee of either party—for two decades.

This is not some new Trump issue, this started with Clinton, was continued with Bush, carried over into Obama’s rule and now Trump is simply playing his role in the deal.

Initially, in 1996, then-Kansas senator Bob Dole (R) introduced and subsequently passed a bill that would mandate the groundbreaking on a new embassy in Jerusalem that year. However, in an effort to water down the bill for bipartisan passage, Dole added a provision that allowed the president to postpone implementation of the move for six months if “such suspension is necessary to protect the national security interests of the United States.”

Apparently, for the past 22 years, every six months, every president has signed the waiver noting “national security interests” got in the way of moving the embassy. All the while, Democrats and Republicans alike continued to vote to recognize Jerusalem as the capital and give their support that one day the US embassy will be moved there.

The issue here is Trump essentially acted the same as his predecessors, yet the political machine along with their shills in the mainstream media spun it out of control to make Americans think there is a difference between the left and the right. Indeed, just after Trump recognized Jerusalem as the capital Israel, despite taking measures to move the embassy, he signed the waiver delaying the embassy move for another six months—just like his predecessors. Dog and pony complete.

As TFTP has consistently reported, behind closed doors, the two parties agree on things that make them the most money—war, corporate welfare, and growing the police state. There is no left versus right, there is only the state versus you.

Under democracy, one party always devotes its chief energies to trying to prove that the other party is unfit to rule — and both commonly succeed, and are right. ~H.L. Mencken