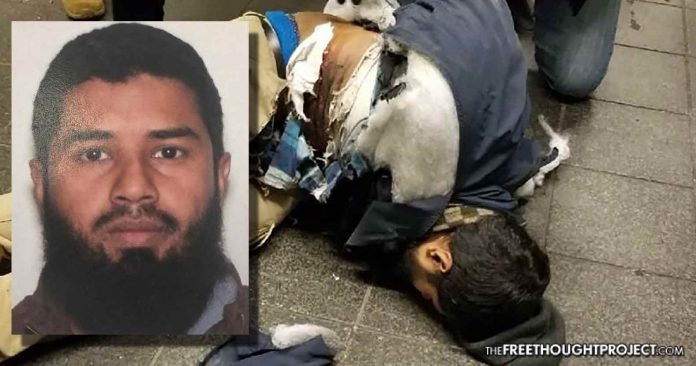 New York, NY — On Monday morning, a 27-year-old alleged terrorist by the name of Akayed Ullah walked into the underground tunnel between Times Square and the Port Authority Bus Terminal and detonated a crudely-made pipe bomb. Luckily no one but Ullah was seriously injured.

After the blast, which happened at 7:20 am during rush hour, the suspect was almost immediately identified and a profile of him released.

Ullah is from Bangladesh and had been living in Brooklyn. He arrived in the United States in February of 2011 and had a visa. He came in with his parents and 3-4 siblings and subsequently obtained a Green Card and became a permanent U.S. resident, according to CBS news.

“They’ve been bombing in my country and I wanted to do damage here,” law enforcement sources reportedly told the NY Post.

He told cops he was inspired by ISIS, but police don’t believe he had any direct contact with the group, sources said.

Currently, police are claiming Ullah is a lone wolf attacker and they are saying there is no reason to believe any other attacks are forthcoming.

“NYPD will be adjusting and adapting the way they always do. Right now, they don’t believe there’s any follow-up attack immediately planned, but there are still several weeks to go before Christmas, two weeks from today,” said Rep. Peter King.

During the press conference, New York’s governor took to the microphone to blame the internet for the attack.

“With the internet now, anyone can go on the internet and download garbage and vileness on how to put together an amateur-level explosive device,” said N.Y. Governor Andrew Cuomo.

Clearly missing the point and hinting at a possible agenda of internet censorship, Cuomo conveniently ignored the fact that people can also securely and easily send those files to one another via cheap satellite antennas, cell phones, dark web, or any other number of ways—without the evil internet.

Within minutes of the attack, surveillance footage from the tunnel was released which shows Ullah detonate the bomb. The footage from a Port Authority surveillance camera monitor shows commuters walking through a narrow hall on the way to the A, C and E trains moments before the blast, according to the NY Post.

“It’s the guy in the hoodie,” one off-camera voice can be heard saying, referring to the suspect as he enters the frame and the bomb goes off.

It is amazing how fast an investigation can go when the attacker is called a terrorist. If we contrast the tragic massacre in Las Vegas last month with this tragic attack in New York, a telling picture begins to appear.

Within only hours, Ullah’s history both inside and outside the United States was made public. We were informed that Saipov lived in Brooklyn, was a licensed cab driver, and that he arrived in the United States in February of 2011 and had a visa. He came in with his parents and 3-4 siblings and subsequently obtained a Green Card and became a permanent U.S. resident.

All this information was immediately released to the public without anyone having to demand it. Contrast this with Vegas—as millions continue to demand answers to very simple questions about Stephen Paddock—and it is the exact opposite.

It took close to a week to learn that Stephen Paddock allegedly traveled outside of the United States. In fact, it hasn’t been ‘officially’ released at all. We were simply told by CNN, through a confidential law enforcement source that Paddock took several cruises that included stops at ports in Spain, Italy, Greece, Jordan and the United Arab Emirates.

As the investigation into the New York act of terror shows us, it is quite easy to find out where people travel to and from inside and outside of the US. Why haven’t we been told exactly where Paddock has traveled?

What’s more, as the video above illustrates, Ullah was caught surveillance cameras and this was all quickly published online. However, in spite of the tens of thousands of cameras throughout the Las Vegas area and inside the Mandalay Bay Casino—not a single video nor even a still image from a surveillance camera has been released.

Indeed, there was surveillance footage released of Stephen Paddock immediately after the shooting. However, this video was obtained by NBC news—from a different hotel, six years ago.

How is it that NBC was able to get surveillance footage from six years ago, almost immediately after the shooting, and police can’t release a single image of Paddock at the Mandalay Bay Casino during his stay and before he shot himself in his hotel room?

It is ridiculous to consider the fact that most of the information the public has about Stephen Paddock and what went on inside Mandalay Bay has not come from police. Instead, it has come from citizens with access to certain information and leaked to the press. In fact, police seem to want the public to remain entirely in the dark about what happened as they continue to change their story and they actually publicly noted that they wanted to punish the person who leaked the photos of Paddock’s suite to the news.

“There was a question about the validity of the crime scene photos that somebody had leaked. I can confirm those are, in fact, photos from inside of the room; they are in fact photos of our suspect, and as the sheriff mentioned previously, we have all opened up an internal investigation to determine the source of the leaks of those photos to the public.”