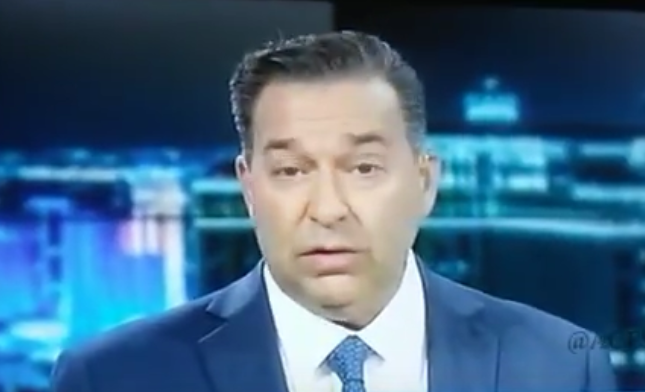 LAS VEGAS (INTELLIHUB) — KSNV 3 News anchor Gerald Ramalho told viewers on the night of the massacre that he confirmed through a police source that there were, in fact, two shooters who fired their high-powered weapons into a crowd of thousands of people who were attending the Jason Aldean concert across the street from the Mandalay Bay.

The news confirming two shooters was reported at 11 p.m. local time and was buried shortly after with no apparent explanation or retraction.

“I have confirmed through a police source that there are two suspects with high-powered weapons,” the anchor reported. “They had some sort of high-ground position and they were firing on the crowd which was attending that Route 91 Harvest Music Festival.”

Additionally, the Ramalho reported that Mandalay Bay had active shooter SWAT teams in the property who were clearing floors of the hotel and casino at the time and said that many the guests and employees of the Mandalay Bay were spotted on the roof.

Ramalho’s report is like a scene out of the 1988 film “Die Hard” starring Bruce Willis! Remember? I will provide a clip to refresh your memory.

Warning: The following video clip from “Die Hard” (1988) contains foul language and graphic imagery and is rated “R” by the Motion Picture Association of America.

Despite the uncanny Die Hard-style correlation, one thing is for sure police audio and other reports from the night of the shooting conclude that there were indeed multiple shooters who acted that night despite what authorities and the mainline press have told the general public.

According to the KSNV 3 News Las Vegas official website:

Gerard has 3-times been awarded an Emmy for excellence in journalism.

In 2008, and again in 2012 Gerard was voted “Best Anchor” in Las Vegas by the Las Vegas Review-Journal Staff. He has also received Electronic Media Awards for Best Anchor and Best Reporter.