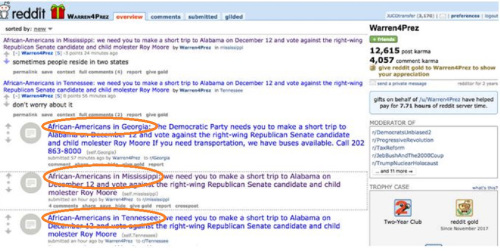 CBS News reports that with all counties reporting, the Alabama Secretary of State gave the final vote count in Tuesday’s special election in Alabama to replace former U.S. senator Jeff Sessions (who left the Senate to be U.S. Attorney General):

Pro-abort Jones is the first Democrat to be elected to the U.S. Senate in Alabama in 25 years.

Reportedly, absentee ballots from military service members have still not been counted.

Moore refuses to concede and is calling for all the votes to be recounted. The situation is made more urgent because of a ruling by the Alabama Supreme Court yesterday, shooting down a lower court requiring counties to preserve their digital voting records. In other words, Alabama counties can destroy voting records with the blessing of the state supreme court. The Moore legal team will need to jump on this development fast to protect those records.

Moore has compelling reasons to demand a recount:

(2) Democratic voter fraud and other irregularities.

There are allegations that busloads of Democratic voters were brought in to voting stations, as well as calls for “African-Americans” in neighboring states to vote in Alabama.

On November 15, 2017, someone who calls himself “Warren4Prez” posted on Reddit a call for “African-Americans in Mississippi” to go to Alabama on December 12 to vote against Roy Moore. Below is a screenshot of the post (click image to enlarge):

Warren4Prez also had other posts on Reddit calling on “African Americans” in Georgia and Tennessee to vote in Alabama. Below is a screenshot taken by Big League Politics (click image to enlarge):

No surprise: Blacks voted overwhelmingly (94.5%) for Doug Jones, as seen in this tweet by BlackLivesMatter leader Deray McKesson: