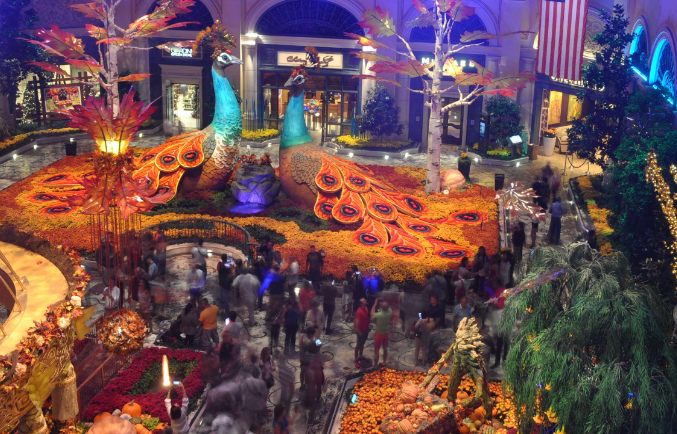 Images captured from inside of the Bellagio on the night of the massacre appear to have been removed from EarthCam website, but why?

LAS VEGAS (INTELLIHUB) — An EarthCam placed inside of the Bellagio Resort and Casino’s conservatory and botanical gardens area of the property captures 4 images per hour, 24 hours a day, 365 days per year like clockwork. However, on the night of the massacre two hours of imagery, a total of 8 images captured between the hours of 10:15 and 12:15 p.m. was scrubbed from the EarthCam.net website following numerous eyewitness reports of gunfire which authorities have tried their best to cover up.

Here is Jake Morphonios with the report:

What could be seen in the images that authorities were so worried about?

A woman by the name of Rene Downs claims that the entire lobby of the Bellagio was a mess after bullets came whizzing in just 30-45-minutes after the Route 91 music festival massacre occurred over a mile-and-a-half away.

Downs recalls a chaotic scene as people came ‘flying’ into the lobby through the front doors.

Downs said that she was sitting with a man by the name of “Daniel,” presumably her husband, who got her down on the ground behind a table when she heard ‘pop, pop, pop!’

“For some reason, there has not been one reporting that we have heard from our friends or anything,” Downs said, pointing out the media blackout on the incident.

But Downs was not the only witness to have heard gunshots at the Bellagio that night.

Additionally, a woman by the name of Rikki Raulerson claims that she was on the Las Vegas strip on Sunday night when the mass shooting occurred and says that early news reports, reports from police, security, and even her friends, contradict the official story that only one shooter was involved.

Raulerson posted a statement to Facebook last Tuesday where she explained what she heard the night of the shooting.

“We were told that there were 7 confirmed shooters, and confirmed deaths at multiple hotels. Including Bellagio, the Aria and New York New York,” Raulerson wrote.

Moreover, a married Canadian man named Jeff claims that he and his wife were in Las Vegas on the night of the mass shooting and were inside the Bellagio Resort & Casino’s conservatory taking photos when major panic broke out in the hotel lobby just before 11:20 p.m.

These eyewitness accounts are proof that something transpired at the Bellagio between 11:15 and 11:20 p.m.

Astonishingly, the man’s claims match up to actual events captured in police audio recordings from the night of the shooting which confirms that between 11:15 and 11:18 p.m. on the night of Oct. 1 there was, in fact, something going on at the Bellagio. But what?

The following is a small portion of the actual police audio transcript which was published by Intellihub on Oct. 10:

Editors note: After this article’s publication, eight images were replaced on EarthCam.net between the hours of 10:15 and 12:15 p.m. possibly to appear to viewers as if the originals were never removed (i.e. they were swapped out.)