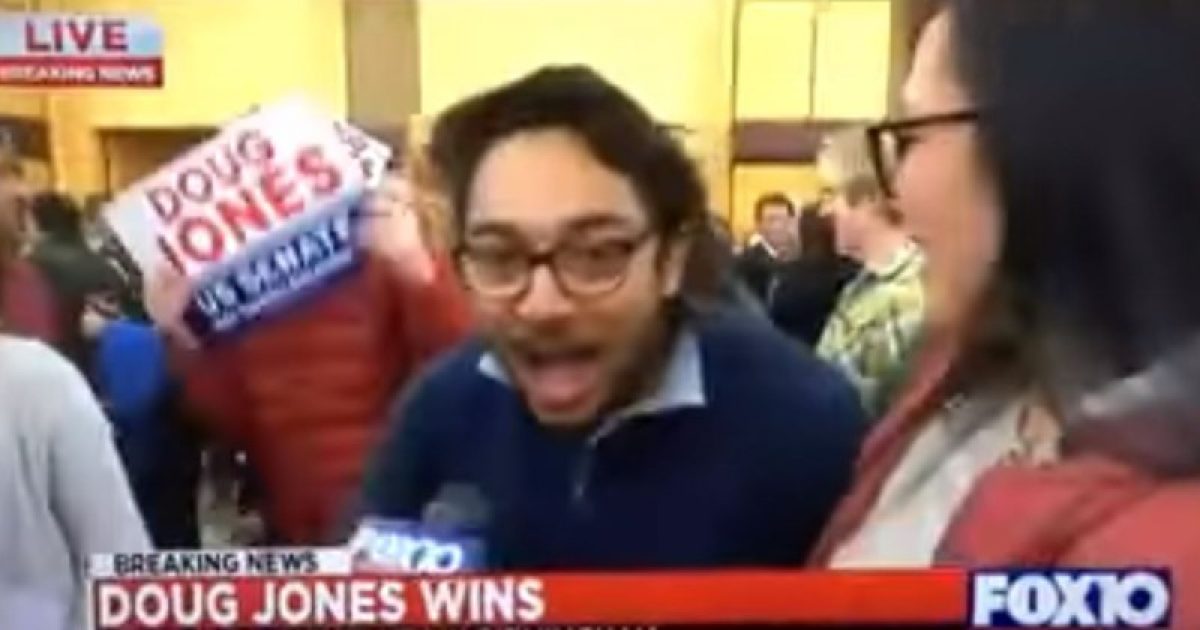 I came across a tweet from Paul Joseph Watson that was the news broadcast from FOX 10, and as the reporter was reporting on the special election in the Alabama senate race between Roy Moore and Doug Jones, which the media and the polling places are claiming that Jones squeaked out a win, a man came up right into the camera and seems to have confessed to a federal and state crime.

My question is, why was he not arrested, and anyone else who was doing what he seems to have claimed to have done on national television

Take a look at the video.

The reporter asked, “Why are you excited to see this victory?”

The man responds, “Because we came here all the way from different parts of the country as part of our fellowship and all of us pitched in to vote and canvas together and we got our boy elected!”

One thing is for certain, people were definitely bussed in for Doug Jones, and probably paid to do so.  However, it’s the claim that he, as part of the “we” in his statement, not only canvased for Jones, but voted for him.

That is a serious crime.  Who are the “we” that voted?

Roy Moore has yet to concede the race, waiting on absentee ballots to be counted as well.

“In this race, we have not received the final count to include military and provisional ballots,” he said.  “This has been a very close race and we are awaiting certification by the secretary of state.”

There is only a 1.5% difference between Moore and Jones, and it takes .5% to trigger a recount under Alabama law.

However, Moore could push for a manual recount, but he would have to pay for that recount.

Someone needs to identify the man in the video, arrest him on voter fraud charges and begin discovering who else was involved.

You can read about voting fraud laws and penalties at the federal level here.

Additionally, Alabama would also be prosecuting those who illegally voted in the election.

Alabama is also supposed to be checking and verifying IDs in order for someone to vote in an election.

We know that the Alabama Supreme Court ruled a stay on Monday of a judge’s earlier order to maintain digital records of the ballots until the election was fully decided.

We also know that convicted felons more than likely were registered to vote, as well.

Thousands of felons may have registered to vote in the weeks leading up to the Alabama Senate election on Tuesday, in which Democrat Doug Jones pulled off a surprise victory.

Alabamians convicted of a felony had been prohibited from casting ballots in the state until May, when Republican Governor Kay Ivey signed a law that restored the right to vote to some of them.

The law specifies a few dozen convictions “of moral turpitude” that bar felons from voting again, but people who committed crimes not on the list are eligible to vote. The list previously was not clearly defined.

Spencer Trawick, who was convicted of third-degree burglary in 2015, registered to vote in June while still incarcerated, after Glasgow told him he could.

According to a 2014 study found that seven in ten felons register to vote as Democrats.