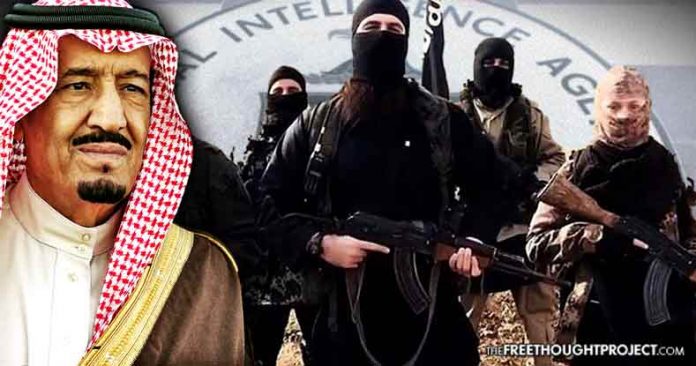 While the mainstream media opted to protect the United States government by treating anyone who dared to question the government’s role in the rise of ISIS as crazy conspiracy theorists, a new report is forcing the MSM to admit that those “conspiracies” were true all along.

Now, mainstream media outlets such as Reuters and USA Today are suddenly reporting that the United States and its close ally, Saudi Arabia, were instrumental in supplying weapons and ammunition to ISIS. Both reports cite an investigation conducted by Conflict Armament Research (CAR), which looked at 40,000 items recovered from Islamic State militants between July 2014 and November 2017.

A final report from CAR titled “Weapons of the Islamic State,” concluded that the vast majority of the weapons used by ISIS were supplied in the thousands, given their origin and the fact that they were found “in numbers far beyond those that would have been available to the group through battlefield capture alone.”

More than 97 percent of the weapons and 87 percent of the ammunition used by ISIS were “Warsaw Pact calibers—originating primarily in China, Russia, and Eastern European producer states,” according to the report. However, the weapons were not distributed to the militants by China or Russia.

The weapons and ammunition were originally purchased by the United States and Saudi Arabia, and then distributed to rebel groups opposing the administration of Syrian President Bashar al-Assad. While the U.S. claimed to be fighting ISIS, the fact is that ISIS was one of the Syrian rebel groups opposing Assad, and as the report noted, nearly all of their weapons came from those purchased by the U.S. and Saudi Arabia.

“Unauthorized retransfer—the violation of agreements by which a supplier government prohibits the re-export of materiel by a recipient government without its prior consent—is a significant source of IS weapons and ammunition. The United States and Saudi Arabia supplied most of this materiel without authorization, apparently to Syrian opposition forces. This diverted materiel, recovered from IS forces, comprises exclusively Warsaw Pact caliber weapons and ammunition, purchased by the United States and Saudi Arabia from European Union (EU) Member States in Eastern Europe.”

While the report claims that many of the weapons were intended for other Syrian rebel groups before they ended up in the hands of ISIS militants, it also notes how quickly the transition between groups happened, after the weapons were originally supplied.

In one case, an advanced anti-tank guided weapon was “manufactured in the EU, sold to the United States, supplied to a party in the Syrian conflict, transferred to IS forces in Iraq, and documented by a CAR field investigation team following its recovery from IS forces.” The report noted that “the full chain of transactions occurred within two months of the weapon’s dispatch from the factory.”

The serial numbers on the weapons are also crucial in determining how the militants acquired them. According to the report, almost half of the weapons that were investigated featured “serial numbers that are close in sequence to those of other, identical weapons in the sample.” As a result, they found at least “240 sets of weapons that were manufactured in the same production runs and probably exported in the same, or successive, batches.” This suggests that in some cases, the weapons were delivered to the militants by the thousands.

The report noted that in many cases, the “supplies of materiel into the Syrian conflict” from the U.S. and Saudi Arabia allowed ISIS “to obtain substantial quantities of anti-armor ammunition. These weapons include ATGWs and several varieties of rocket with tandem warheads, which are designed to defeat modern reactive armor.”

As the investigation by Conflict Armament Research concluded, although the United States and Saudi Arabia both claimed to support coalitions that were formed for the purpose of defeating the Islamic State, the thousands of weapons they were supplying rebel groups did the opposite.

“These findings are a stark reminder of the contradictions inherent in supplying weapons into armed conflicts in which multiple competing and overlapping non-state armed groups operate. Under such circumstances, it is difficult to exert effective control over which groups ultimately gain custody of weapons. As this report demonstrates, Iraq and Syria have seen IS forces use large numbers of weapons, supplied by states such as Saudi Arabia and the United States, against the various international anti-IS coalitions that the two states support.”

While the mainstream media has failed to ask questions about some of the most obvious red flags in the United States’ foreign policy, The Free Thought Project has provided in-depth coverage of both the United States’ hypocrisy in the Syrian conflict, and Saudi Arabia’s assistance in helping to strengthen the same group of militants that the two countries claimed to be working to defeat.